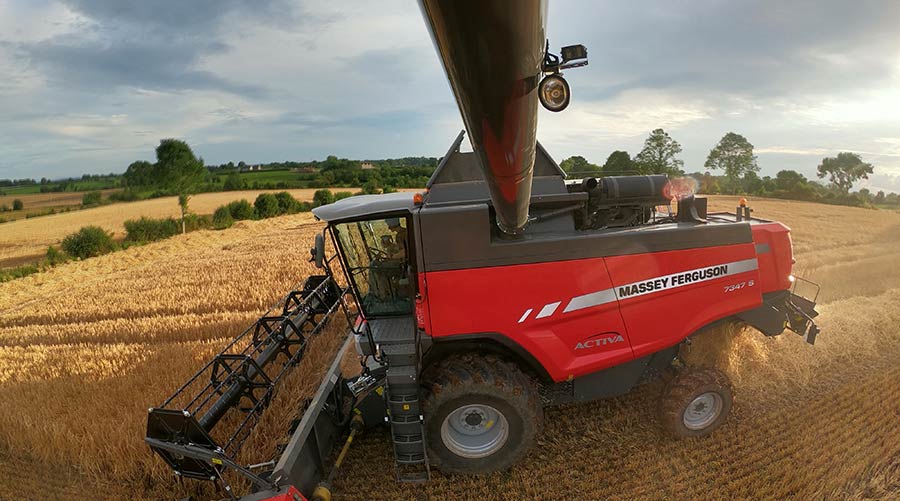 Most of the winter barley and oilseed rape crops in southern England is now safely harvested and in store, although the brakes are on for many combines with an unsettled week of rain forecast.

In Essex, most of the expected winter barley and oilseed rape is now in store at Harlow Agricultural Merchants, while it has taken in the first 5% of its anticipated wheat crop, which so far is looking well.

“Barley yields have been great but there has been a little bit of variation with specific weights and some grain has slipped below the net,” said the firm’s Stuart Attridge.

While harvest prospects look promising, the issue now is securing exports in a very slow market, he added.

“Wheat yields have been great, there are no issues with disease, and moisture is down to 11% in some cases. Protein levels are slightly low, however – I don’t think we’re going to be much better off than last year in terms of protein content,” he added.

Further west, the focus is turning to wheat, with most winter barley and oilseed rape already cut in the region.

“Quite a lot of winter barley has done very well, and about 90% of our growers are around half a tonne up in terms of average yield,” said Ian Eastwood at Cefetra Grain’s Wessex store.

“The potential looked like it was there all season, but it wasn’t until the combines were in the field that it really showed the fruits of everyone’s labour this year,” he added.

The story is not quite so positive for oilseed rape, with yields down to as low as 1.1t/ha and a lot of evidence of cabbage stem flea beetles in crops, he added.

Further across the South West and into Devon and Cornwall, winter barley yields have averaged about 8.5t/ha, according to Ed Chudley at West Country Grain.

“We’ve seen good yields and decent specific weights in winter barley, but unfortunately nothing terrific for oilseed rape. Yields have averaged 3.7t/ha and the oils haven’t been that great – around 42-43%. The dry weather has affected things massively this year,” he said.

Looking ahead, rain in the region is likely to stop play in the coming week.

“This time last year we had broken the back of harvest, but with the weather pausing things at the moment, it is still early days,” he added.

Bucking the disappointing rapeseed trend, Robert Wright has been very pleased with his TuYV-resistant variety Temptation at White House Farm, Barnaby, Suffolk, both in his commercial harvest and on-farm trials.

“It yielded around 5% more than its nearest competitor in our trials and it’s delivered the same in the field this year,” he said.

Yields averaged 5.3t/ha, which Mr Wright believes is largely due to the strength of the variety in what has been a challenging season.

“Temptation gets away really quickly and in poorer years it’s one of those varieties that you can visibly see growing more strongly and establishing better – that’s key when you can suffer so much loss early on,” he added.

“In two very contrasting years it’s delivered high yields, good quality and its lack of variability has given us the peace of mind. It’s one we’ll definitely be drilling for next year,” Mr Wright added.

The image for this story is one of cutting winter barley in County Armagh in Northern Ireland, which was yielding 8t/ha, photographed by Tom Wells. This photo was uploaded to our harvest gallery and you too can share your harvest pictures with us here.