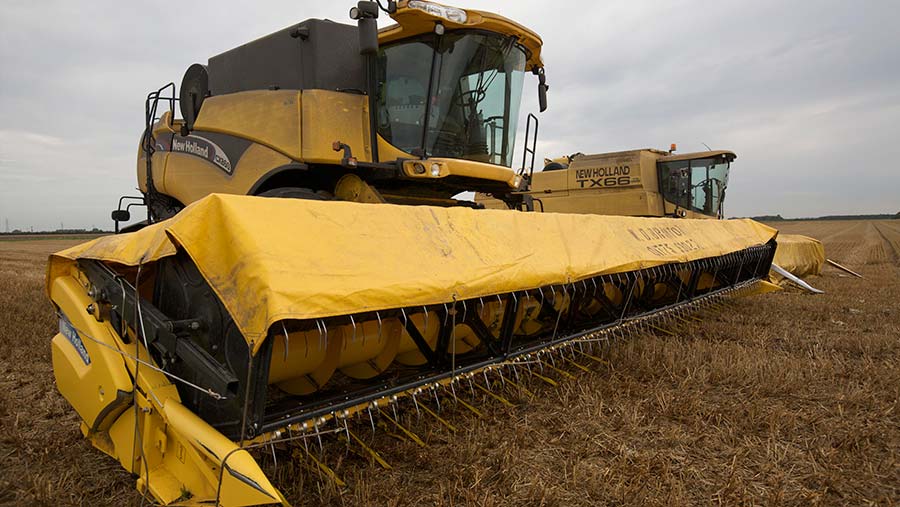 Heavy rain is hampering harvest progress, leaving crops and straw stuck in the field and farmers struggling to get on with oilseed rape drilling for next season.

“It went very well and we had good specific weights of over 67kg/hl and probably averaged 9.9t/ha on light brash soils,” he said.

This year he grew Orwell, having previously grown Cassia, and was very happy with the results.

Unfortunately, the oilseed rape was not as pleasing, with yields ranging from 1.2t/ha to 3.5t/ha.

“We expected the 0.5t/acre crop because it was decimated by flea beetle. We started with the best part of 49ha and finished with 28ha. Everybody is saying the same,” he said.

Harvest hasn’t got off to the best of starts for Glen Sanderson at Eshott South Farm, Felton.

“We’re having a really difficult start to harvest. It’s just a question of grabbing any opportunity to get on.”

He has managed to harvest his winter barley, which has done better than the farm average of 7.4t/ha.

“I would say it’s at that figure or slightly better and the amount of straw is very pleasing, but we haven’t been able to bale some of the straw,” he said. “It’s just not been dry enough.” 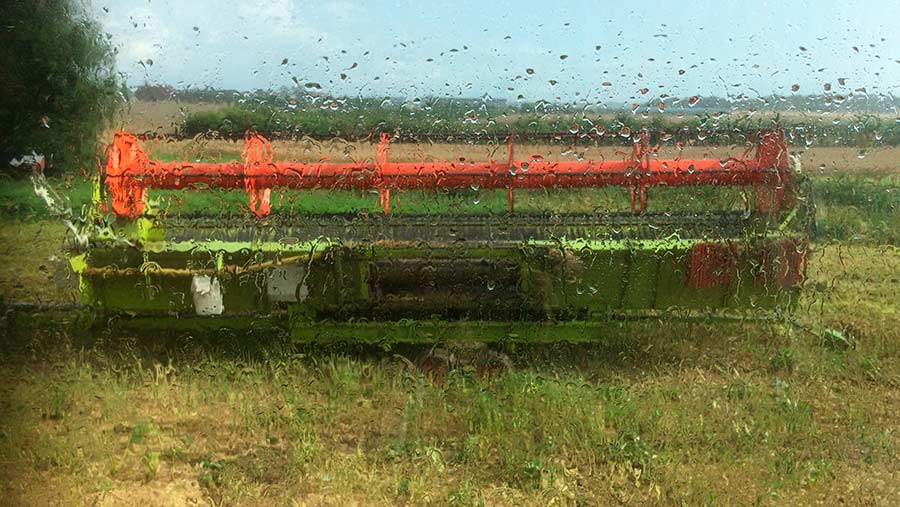 Leonard Morris was rained off on the morning of 7 August and uploaded this picture to the Farmers Weekly Harvest gallery.

Sunny spells and a brisk wind soon dried out the crop. As he went to pick up the combine header to start again, he was just 10 yards short when it started raining again.

The biggest challenge for Mr Sanderson is to clear the fields so he can start drilling oilseed rape for next year.

“We have to try and get it in by the end of August at the latest, but we can’t get on the fields as they are too wet.

“We are a pretty resilient bunch in Northumberland, but this is quite trying,” he said.

“We are used to this weather, but it’s been particularly difficult this year.”

Further north, harvest has gone well for Scott Campbell at Kirkton Farm, Kinellar, but rain has now brought things to a halt.

“I have finished winter barley, but still have straw to bale. The biggest hold-up at the moment is not being able to get the slurry out, bales shifted and oilseed rape established,” Mr Campbell said.

“I can’t see a window of two consecutive dry days, but that could all change.”

His barley did really well, with the lightest field on the farm yielding 9.6t/ha and specific weights averaging 62kg/hl.

“It was a Tower and Cassia blend to get the specific weight up,” he said.

His other crops of Tower and Orwell feed barleys yielded 10.3t/ha, and had high straw yields of around 5.6t/ha, which was very pleasing.

He said: “The growth regulators we put on have really paid off as there’s a lot of flat barley around, but we had no heads on the ground.”

An early start to harvest for Robert Craig at Carse Hall, Ballykelly, Londonderry, has been interrupted by rain.

“Harvest started about 10 days earlier than normal, on 24 July with bright sunshine,” he said.

Since then, he has had quite a bit of rain and things are at a standstill.