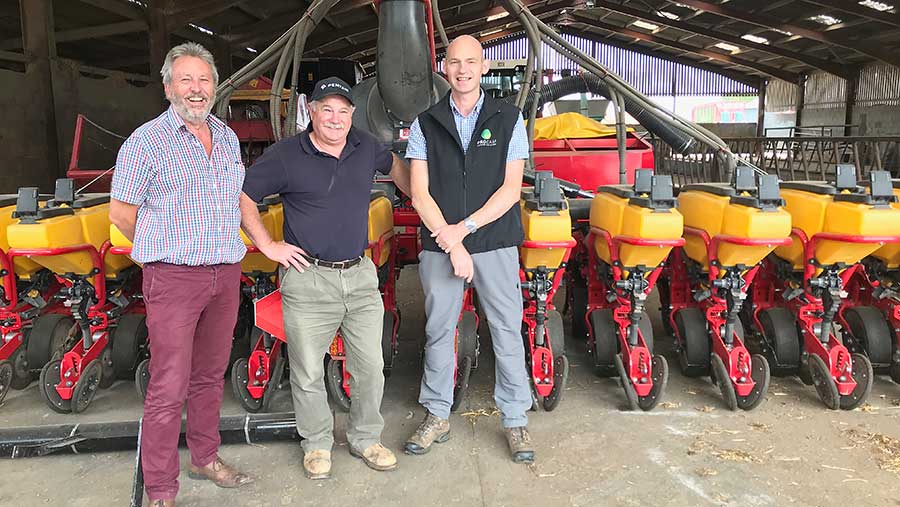 Martin Smart, centre, and Paul Gruber, right, with agronomist Gavin Moss in front of the Vaderstad

Mr Smart was within touching distance of the OSR yield world record in 2017 when he won the first Yield Enhancement Network (YEN) award, run by crop consultants Adas, with a 6.4t/ha crop.

He achieved this by using a top-down cultivator and then broadcasting seed with a Vaderstad carrier.

Despite always previously achieving brilliant results, his trials this season using a Vaderstad Tempo V 12-row maize drill showed that establishment into undisturbed, moisture-retentive land, preferably with starter fertiliser, could be the way to overcome flea beetle pressure in the future.

About 300ha each year is put into OSR, but this year Mr Smart lost 121ha to flea beetle and poor establishment, having previously never had to re-drill an acre.

After doing the best possible job spraying pyrethroids the previous season and finding only one or two dead flea beetles, Mr Smart realised he needed an alternative solution, as the pressure from the pest is only likely to increase.

“The pressure this autumn is going to be immense,” he says. “The adults are now on the maize and spring beans. Our acreage has reduced massively.”

The use of varieties which demonstrate strong vigour is being seen as the foundation for a good future flea beetle strategy, but Mr Smart believes even the strongest variety needs the helping hand provided by good establishment and nutrition planning.

Mr Smart holds variety trials on his farm every year, growing about 20 varieties to see which are best suited to his land.

“I know the varieties which have vigour; now we need to come up with a plan for nutrients.

“Rapeseed needs the best possible start. You need everything in your favour to get the crop up and away.”

The new drill will allow Mr Smart to refine his fertiliser technique, as it has both a front hopper for starter fertiliser and can also place granular fertiliser with the seed.

“Being able to put the nutrients in at the right depth at the time of drilling could be key,” he says.

Mr Smart’s decision to upgrade was swayed by being able to borrow Vaderstad’s own demo drill for some of his variety trials, using it to direct drill into stubble which had been sprayed off at 50 seeds/sq m, 40 seeds/sq m and 30 seeds/sq m.

“Our drill came up for renewal and Vaderstad’s Tempo drill had all the options,” he says.

Drilling was in August during last year’s drought, and the difference in establishment was clear, with the Vaderstad achieving good establishment as the soil never lost its moisture.

Meanwhile, the rest of the variety plots, which were drilled with a Horsch Sprinter 106, were lost due to the dry conditions.

The Tempo drill placed all of the seed at a consistent depth into the conserved moisture, meaning germination was consistent across the field and the crop stood a better chance against flea beetle attack early on.

A nearby 40ha field, which germinated in two or three waves as the seed had been broadcast, had to be sprayed and topped out after the plants showed evidence of larvae damage to the stems.

“Growers saw success last autumn when they didn’t move the soil, especially when compared to fallow ground, as stubble seems to confuse the beetles,” he says.

Moving soil also gives the beetles somewhere to hide, he adds, whereas triple-rolled headlands, which should, in theory, have been destroyed by the pest, were fine, indicating that good consolidation is important.

Mr Smart believes the optimum seed rate could be between 35-40 seeds/sq m, with 50 seeds/sq m possibly producing too thick a crop in relation to the drill width (see box).

However, he will only be able to determine this at harvest, when he is able to properly get in and assess the branching.

Mr Smart hopes to drill at least some of his crop next season with the Vaderstad Tempo in order to be able to place starter fertiliser when drilling, but for comparison he will still broadcast some of his acreage using his original drill.

Mr Smart will place the microgranular starter fertiliser UmoStart with his OSR seed.

“If the soil hasn’t been moved then it needs nutrition,” Mr Gruber says.

“There’s a hierarchy with nutrition, starting at the top with true starter fertiliser, followed by 30kg of DAP applied at the start, and then 30kg of nitrogen.

“The key thing to think about is if it’s bone dry in the middle of August then don’t go drilling.”

Equally, conditions must be dry enough to direct drill.

“Last autumn was extreme and direct drilling was the right thing to do,” says Mr Gruber. “But it wouldn’t have been the year before.”

Many growers try to reduce the impact of flea beetle by using a high seed rate, even though high plant populations, agronomically speaking, don’t produce the best crops.

The plants already can’t achieve the best yields, and while they can overcome adult grazing to a certain extent, they have no advantage over the larvae, says Mr Gruber.

This was proved when one of Mr Smart’s neighbours lost a headland to flea beetle which had accidentally been drilled at a very high seed rate, while a nearby area drilled with a hybrid at 50 seeds/sq m survived.

In order to determine the right seed rate Mr Smart is running a second trial this season comparing four passes of OSR drilled with the Vaderstad Tempo with another four which are bio drilled, both at 50 seeds/sq m.

These will also be compared with four passes drilled with the Vaderstad at each of 40, 30, 25 and 15 seeds/sq .

“We were looking at the what-if scenario,” Mr Smart says. “It’s no good drilling at 50 seeds/sq m – we know that’s going to grow.

“We said, let’s push it to the extreme, and it’s so easy to change the seed rate.”

At 50 seeds/sq m Mr Smart says the plants are almost too thick in the row, although they do have room to grow sideways.

The plants look too big, bushy and thick, but they might be fine come harvest, he says, when the level of branching can be determined and the whole field will be yield mapped.

He says the ideal way to plant them is to broadcast so that the plants are not standing in rows, but broadcasting results in poorer germination.

“Everyone thinks you’ve got to have a thick canopy, but you need it like a Christmas tree.

“You could say the perfect plant population is around 25-30 seeds/sq m, but you’ve got to be a brave man,” he adds.

“It might be bad that we drilled at 15 seeds/sq m, but we have at least established that we don’t need to drill at a high level.”

Next season Mr Smart plans to run the trial again with starter fertiliser, with the aim of finding the right plant density.