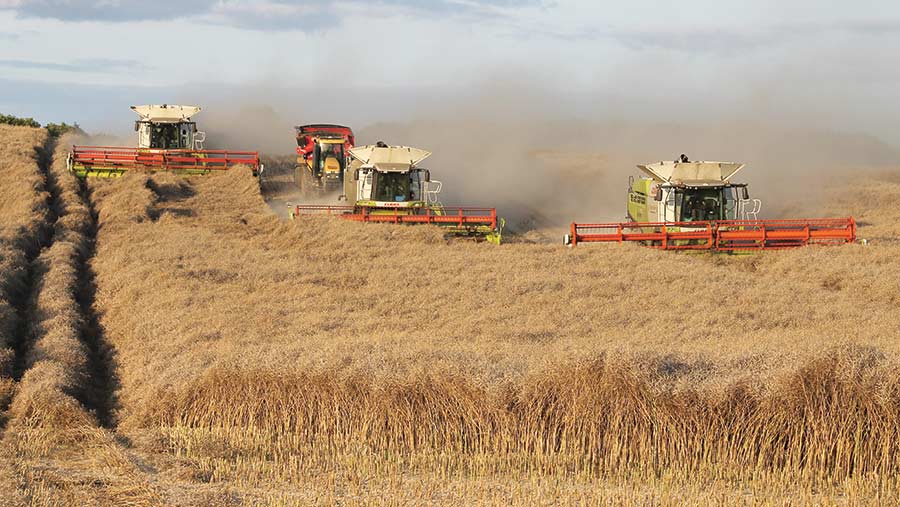 Combines are starting to roll again this week, with high hopes of making good progress with a more settled spell being forecast for the Bank Holiday weekend.

Especially with the wheat harvest just starting in the North, which has seen more than its fair share of wet weather in recent days.

With the barley harvest almost done and wheat on the horizon, harvest has been very stop start, according to Andrew Gloag at Busby House Farm, Stokesley.

“It has been a challenge so far and hard work compared with last year,” he says.

Having just completed 405ha of the hybrid barley Bazooka and conventional variety Funky, Mr Gloag is delighted with yields of 9.9t/ha.

However, 229mm of rain in the past three months meant there has been problems with germination, and specific weights are a touch low at 60-61kg/hl.

“Elements of it have gone down, which will be a challenge to cut, but it is just going to be one of those seasons,” he says.

Other local farmers are hoping to start wheat in the next day or two.

Gary Bright at Grainco also says the wheat harvest is just beginning in the North, with the first farms combining on Monday (19 August).

“Barley and oilseed rape yields are good, but farmers are panicky because of the weather.

“Hopefully, with the better 10-day outlook, it will be all go.”

Further south, it has been a busy time for Dan Murphy at Woldgrain.

“The past two weeks have been extremely challenging; getting the sheer tonnage in and dried and keeping up with modern-day combines,” he explains.

“Oilseed rape tonnage is down on expectations this year due to the weather, pigeons and a massive flea beetle problem,” he says.

“However, it has been a very busy year for winter feed barley, with some yields being exceptional and much higher than expected.”

“There is an ongoing trend of having more weather extremes, and there is not much we can do to adapt.”

“We’ve had to purchase 60,000 litres of kerosene to get through the upcoming bank holiday weekend, which is an added cost for growers to deal with.”

It is a similar story in Devon, where the barley harvest is almost complete, with above-average quality, according to Duncan Lyon at Devon Grain.

“The combines are just starting to roll again here now. We have only had 20% of the wheat that we were expecting – the store is only 50% full and last year we had nearly finished harvest,” he says.

Wheat was now entering the store at 17-18% moisture.

“The wet weather usually causes the quality to drop off, however, so far it has been encouraging.

“There is a long way to go before we see a problem.”

Despite the catchy weather, harvest is in full swing in Cambridgeshire, with Camgrain intaking up to 20,000t/day across its stores.

“It is very different to last year,” says the firm’s Philip Darke.

“The barley is coming in fine, however, the nitrogen is not as high as last year.”

Wheat was yielding well, with good yields so far, he adds.