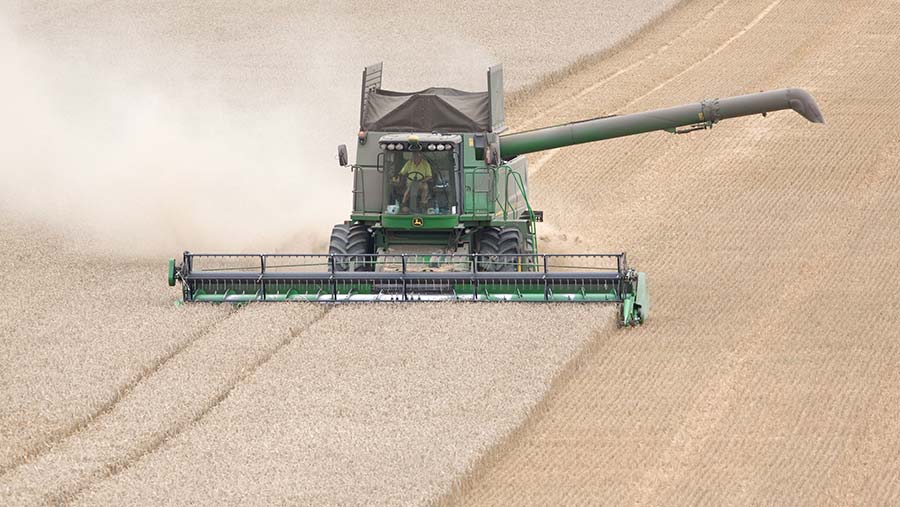 Harvest is back in full swing after recent rain, and although some crops have gone flat, yields and quality are looking promising across much of the country as the weather turns sunny and warmer.

Spring barley harvest is just under way at Lockdhu Farm, Nairn, and so far Hamish Forbes is pretty pleased with both the yields and quality.

“We’ve got Laureate and Sassy and have averaged 6.9-7.9t/ha on light land – although on the really light land it droughted early on so would be below that,” he said.

“It’s looking really promising. Nitrogen contents are very low at 1.3-1.4% – I think the plants have used all the nitrogen to grow, so there’s plenty of straw compared with last year.”

Winter wheat is not quite ready, but has looked well all season. “We should be into it next week,” predicted Mr Forbes. “We’re about a week behind a normal year, but nothing’s suffering. Barley and wheat are still standing although there are some flat oats in the area.”

“It’s definitely yielding over 10t/ha, but I’ve got a new combine and haven’t calibrated it yet, so that’s based on a calculation into the store,” he said.

“We’ve had a torrid time really – we had four inches of rain over one weekend two weeks ago – I’ve gone from cutting the wettest oilseed rape ever (at >20% moisture) to the driest wheat I’ve ever cut, at 15% – it’s just bizarre,” Mr Tuer added.

The Alizze oilseed rape was something of a salvage job, as it was just starting to sprout, but the 50ha which was combined in good time yielded a pleasing 4.6t/ha.

Most of Mr Tuer’s remaining crops were standing well, although further south some fields had gone flat.

“August is always our wettest month but it’s excelled itself this year,” he said. “Fortunately, September is looking better, as it always does.”

It’s a similar story at Eyton House Farm, Telford, where Bruce Udale and his daughter Isabel Udale-Moseley have been getting on well with harvest, in between the showers.

“We finished the oats yesterday [22 August] and are now back on to the wheat,” Mr Udale said.

The Mascani oats yielded more than 8.6t/ha, which was well above the farm norm of 7.4t/ha. “The bushel weight in the last field wasn’t brilliant but the rest was fine,” Mrs Udale-Moseley added.

Specific weights were also good, with Costello coming in at 78-80kg/hl. “I wasn’t expecting it to be so good, with the extremes of weather we had,” he said.

Windozz and Campus oilseed rape also did well, at 4.2-4.7t/ha, Mrs Udale-Moseley said. “Normally 4.3t/ha is pretty good for us.”

The family now had about 81ha of wheat left to cut, she added. “The Dunston wheat looks pretty good, so I’m looking forward to the results. Another week should see most people finish off around here.”

Across in Woodbridge, Suffolk, Stuart Baker plans to finish harvest at Ivy House Farm this afternoon (23 August). “About 50% of people are done around here, and most of the rest don’t have much left, although it just depends how you caught the showers,” he said.

Yields have generally been very good, although Mr Baker was flummoxed by the season. His Barrel and Gravity first wheats did a consistent 10.4t/ha and 10.6t/ha, respectively, while his second wheat Diego managed 11t/ha.

“Bizarrely, my 45th year of continuous wheat – which was Grafton – was the highest yielding at 11.4t/ha, and I don’t know why,” he said.

Any crops which looked thick and plentiful had slightly disappointed, while thinner crops had trounced them – even though specific weights hadn’t been very good, at 74-76kg/hl across the board.

Wembley and Elgar oilseed rape yielded below average, at 4t/ha – although given the cabbage stem flea beetle damage in the area Mr Baker was happy with that.

Cassia winter barley went flat early on and came in at 9.4t/ha – below the expected 10t/ha, while Planet spring barley managed 9.3t/ha. “I would have been happy with 8t/ha – and hopefully it will go for malting, too,” he added.

But the crop of the year was Tundra winter beans, which produced 5.75t/ha. “They looked great all year and have been sold for human consumption,” Mr Baker said.

That left just the spring wheat to cut this afternoon. “It’s got great long ears, so I’m pretty excited to get that done.”