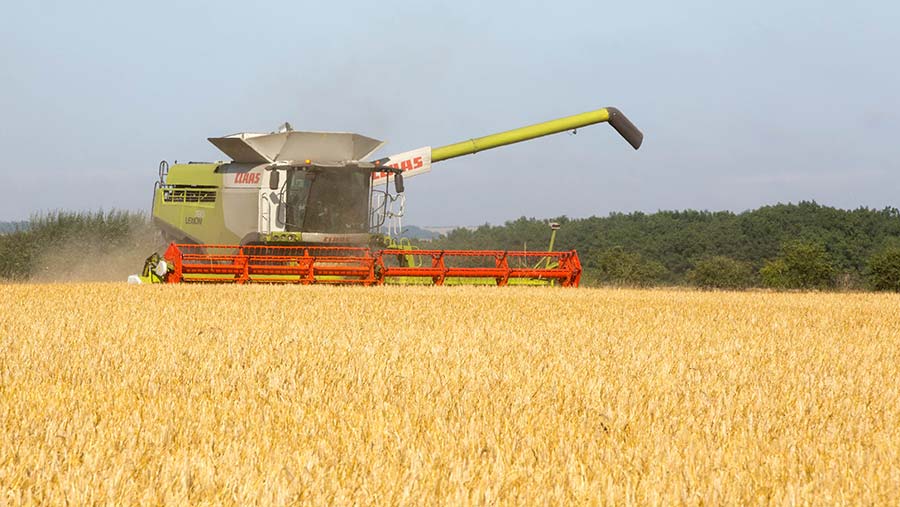 A week of record-breaking temperatures and torrential storms saw combines working through the night to dodge the weather and get grain safely in stores, and as harvest progresses prospects are looking more positive, with good yields in winter barley and some early-cut wheat.

Winter barley harvest is almost complete at Tregirls Farm in Padstow, Cornwall, with 40ha of Cassia cut and significant progress made on the remaining Maris Otter crop.

“The Cassia is yielding quite well at 6.1t/ha. Given the dry weather this year, we are very happy with this, and the straw has been OK too. Specific weight is averaging around 65kg/hl,” said grower Charlie Watson-Smyth.

Next to meet the combine is a crop of Propino spring barley, which is anticipated to be fit within the next 10 days. “Despite the severity of the dry weather this year, things are looking OK at the moment,” he added.

The outlook isn’t so positive for Stephen Moore, with his oilseed rape yields down significantly at Manor Farm, near Salisbury, Wiltshire.

“So far, we have cut 20ha out of 120ha and it is yielding quite badly at 2.5t/ha,” he said, but added that while rapeseed yields are down, spring barley is looking well.

“Around a quarter of our Laureate spring barley is fit and it is looking quite good. Thankfully, I have got forward sales on the barley, so the crop is actually worth quite a lot of money,” he said.

“The hot weather should help to give a boost to bushel weights in wheat and while the rapeseed is going to be poor, I think we are going to be OK in the South West. It’ll be an average harvest, not a total disaster,” added Mr Moore.

“This year we grew Libra and Bazooka and yields have been average at around 8t/ha,” said grower Stephen Whitby.

With barley safely in the stores, focus has now turned to wheat, with 40ha of Zyatt cut over the past two days.

“There looks as if there is going to be a massive difference in yield depending on the soil type this year. On the lighter soils, it hasn’t really performed. I’m estimating an average of about 8t/ha,” he said.

Unlike much of the country, Tim Barrell has escaped the burden of cabbage stem flea beetles at his 240ha farm near Dereham, Norfolk, with oilseed rape yields coming in surprisingly well.

“We started cutting on Monday night (22 July). I didn’t think it was going to be fit, but the moisture was 7.5% so I was pleasantly surprised,” he said.

“It has been a bit of an odd week, with not knowing what the weather was doing and trying to avoid the rain, but we have been really pleased with the yields so far,” Mr Barrell added.

He grew 35ha of the variety Expansion for the first time this year, which has yielded an average of 5t/ha.

“We haven’t grown oilseed rape in a while, and when I was drilling it, I didn’t think it was going to be great, However, it has done well considering the flea beetle pressures this year.

“I did give it a hit of early nitrogen – around 80kg/ha – in the early autumn just to help it get away, but I think we have been very lucky,” he said.

Still to meet the combine is 88ha of Siskin and Gravity winter wheat.

“The wheats are one or two weeks away, but so far I’m really impressed – especially with the Gravity. Even with the drought last year, it performed excellently,” he added.