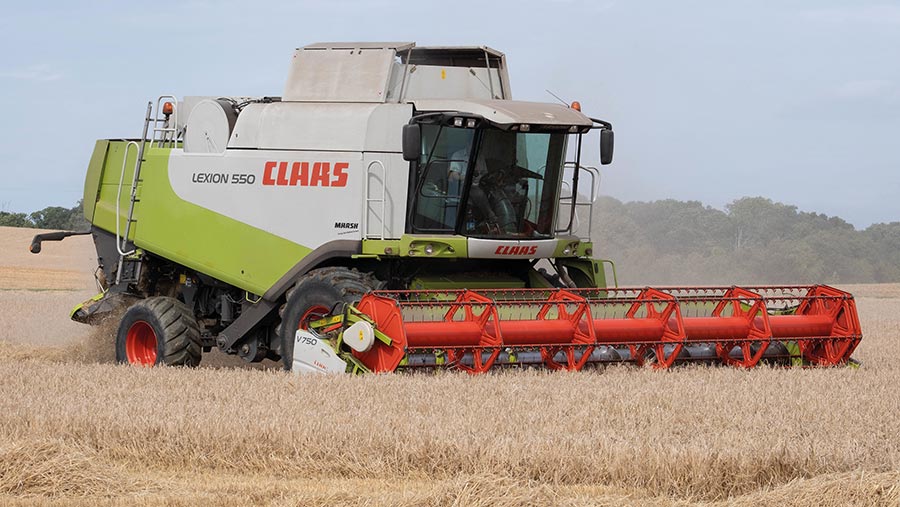 Cereal quality has deteriorated sharply since the rain, but combines are making good progress again, so there is an end in sight for harvest 2020 across most of the country.

In the South, combines are just clearing up the last of the spring wheat and beans, with harvest set to conclude by mid-week (16 September), according to Mike Clay, operations manager at Trinity Grain.

“Anything cut after the rain – particularly the spring barley – has deteriorated very quickly, with pre-germination and weathered grains,” he says.

Farmers cut about 90% of the winter wheat and 50% of spring barley before the rain, so only about half of the spring barley crop has made the malting grade.

“Spring oats are very weathered, but spring wheat has held up – other than some ergot, it’s been fine at 13-14% protein and 300+ Hagberg,” Mr Clay says.

Yields have been mixed, and winter wheat protein contents have been low, averaging around 12%.

“And bean yields are very disappointing – 30-40% down and with very high Bruchid levels.”

On a brighter note, only about 20% of the total store intake had to be dried, compared with 40-50% in a normal year.

Further east, the grain driers have been running non-stop at Weald Granary over the past few weeks. “Since the rain crops have been coming in at 16-22% moisture, with beans up to 25%,” says laboratory manager Chloe Sullivan.

“We haven’t had any human consumption beans this year – they’ve all failed due to Bruchid damage and discolouration.”

Yields on all crops have been massively down, she adds. “And anything cut since the rain has ended up as feed due to pre-germination.”

Even spring wheat has lost its Hagberg since the rain – to 100-200 seconds – although protein contents have been high at 13-14%.

Nitrogen contents have also been high in the spring barley, averaging 1.87%, so, with the added weather damage, only about half of the crop has made the malting grade.

It’s a similar story further up the country, where a third of the Laureate spring barley and 43% of the Planet has been downgraded to feed, says Dan Murphy, lab and transport manager at Woldgrain.

Harvest is now about 84% complete in the area, and quality has seriously suffered post-rain. “We had 30 loads of spring barley in on Tuesday (15 September) and only four passed for malting, due to pre-germination and high nitrogen contents.” Laureate has averaged 1.76% nitrogen, with Planet at 1.83%.

Hagbergs in later winter wheat have all dropped off, although spring wheat has held up reasonably well, with high protein contents across the board reflecting the poor yields, explains Mr Murphy.

But the biggest issue has been ergot. “We’ve seen an awful lot in both wheat and barley – as much as I’ve seen in 10 years. Almost every load of spring wheat has some ergot in it.”

Across all the wheat, 57% of loads have had ergot present, compared with 27% of the barley. “It’s just one of those years when everything has gone against us, quality-wise; which growers certainly didn’t need on top of the poor yields.”

In sharp contrast, growers in the north of Scotland have enjoyed a relatively good harvest, according to Gary Catto, chief executive at Highland Grain. “Spring barley yields look healthy; we missed the rain that hit further south – and it’s a few degrees colder overnight here – so there’s no pre-germination, and specific weights are a good few points up on last year,” he says.

Nitrogen contents are very low, averaging 1.37%, but skinning has been a problem through harvest, with up to 22% skinned grains.

Spring barley harvest is 85-90% complete, with store intakes about 50% through, adds Mr Catto. “There’s still wheat left in the fields, but members are quietly confident that it will be a decent crop. We’ll be finished by the start of next week if the weather holds.”