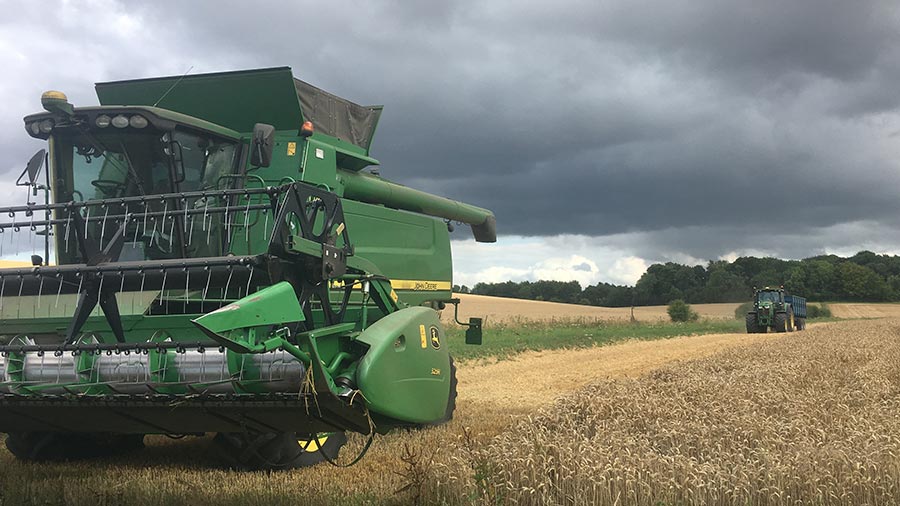 Yields continue to be disappointing as growers’ frustations grow with the unsettled weather, but quality is generally high with crops meeting premium specifications.

However, the quality is not enough to compensate for the low yields being seen across Britain.

Barley has been a mixed crop for Adrian Ivory at Strathisla Farms in Meigle, with spring barley proving a good crop so far, while winter barley was much less pleasing.

“It was better than expected and pretty good quality, with the advantage of being ready 10 days earlier than Laureate,” he explains. “As long as the maltsters want it, Sassy will win out.”

Mr Ivory has heard that Laureate is having some germination issues and thinks it might not last in Scotland.

He has 12ha of Laureate to combine and 121ha of high nitrogen Fairing barley which is ready to combine when there is a weather break.

He finished winter barley in July, with the six-rows doing better than the two-rows. Kingston averaged 7.9t/ha and Kingsbarn 7.5t/ha, while the two-rows achieved 6.9t/ha which was disappointing for Mr Ivory.

With wheat, he still has 40ha of Skyscraper, 40ha of Istabraq and 40ha of Jackal to combine, but it all looks to have recovered well after the winter. His biggest concern is how reduced his straw yields have been so far. “The yields have been dreadful.”

Growing triticale and spring wheat for seeds, his yields averaged 6.01t/ha and 4.27t/ha, respectively. “They were disappointing and down 40% on a normal year,” he explains.

This was despite him irrigating the crops. “If we hadn’t irrigated I don’t know what we would have got”.

In contrast, specific weights came in good at 76.2kg/ha for the triticale and 74.5kg/ha for the wheat. “The straw was also good and it’s in the shed and not getting wet,” he adds.

Harvest has also finished for Mark Turner at Needham Hall Farm, Gazeley, but his crops also suffered from the drought. “We are about 50-60% off where we should have been, as our sandy ground doesn’t hold the water.

His winter barley only achieved about 50% of his farm average which is over 8t/ha. “Feed barleys usually do really well on this land, but it just didn’t stick the drought.”

Spring barely yields performed similarly and winter wheat came in 60% less than expected, with highs of around 10t/ha expected in a good year.

“It’s been a nightmare year and we have suffered badly with secondary growth,” he added.

Wheat yields are coming in variably for Daniel Harding at Alvis Contracting, Redhill. “We have done a fair chunk of the wheat, but yields range from 4.9t/ha to 7.9t/ha, with nothing coming in over that,” he says. “But the majority of the crops we got in before the rain made milling grade.”

“There will be a bit of a premium, but this won’t make up for the lost tonnes – the yields are just down too much.”

Mr Harding has also suffered with regrowth and had to spray off some wheat that had grown a load of extra tillers. “We didn’t want to leave it any longer and so had to go over it with glyphosate.”

He is hoping to move into his 162ha of blue peas next – a crop he hasn’t grown before. “We tried, but it’s too wet now and we can’t get into them and the sample we took doesn’t look too good.”