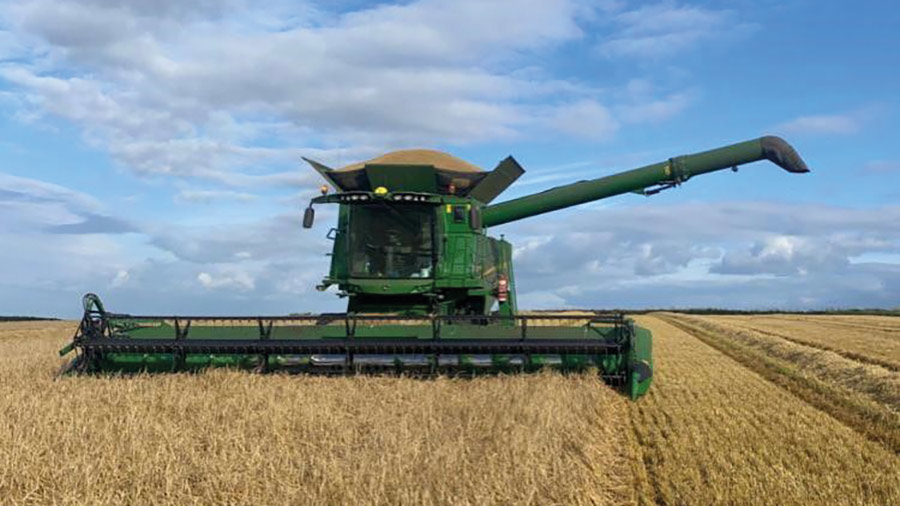 Wheels are back in motion across the country after some patchy weekend weather, with some concerns about retention and brackling in spring barley. However, quality and yields remain reasonable.

Hopes are now pinned on a period of fine weather to complete the harvest, with spring barley now taking centre stage.

Kicking off north of the border, the spring barley harvest is off to a slow start – hampered by sporadic weather conditions. “We’re about 15-20% through the spring barley and quality is good so far,” said Gary Catto, chief executive at Highland Grain.

Across two varieties, Laureate and Sassy, nitrogen has been favourable at 1.49% with screenings low for most and skinnings within specification – however, yield is back on last year.

“The drought has undoubtedly had an effect on yield, but to what extent we don’t know yet,” said Mr Catto.

“The forecast over the next couple of weeks looks OK, but there is some barley that is a couple of weeks away from being ready for harvest – timings seem to be a mixed bag this year.”

In Lincolnshire, Woldgrain is expecting 10,000t of spring barley, having taken in 5,000t of malting barley so far, according to Dan Murphy, laboratory and haulage manager.

And spring barley has been the success of the season so far. “The oilseed rape and the wheat have been a bit dodgy quality-wise, but the barley has been good,” he added.

In the East, spring barley has been performing well and a complete contrast to last year, according to Philip Darke, operations director at Camgrain. “We’re averaging less than 1.65% nitrogen, and last year the nitrogen was through the roof,” said Mr Darke.

Harvest is later than usual due to the cold April. “We’ve taken in Laureate and Planet and we’re about halfway through. We just want some fine weather now; I think within two weeks, hopefully, it will largely be over.”

Heading south, farmers are progressing with malting barley, albeit with a very stop-start harvest due to the weather, said Simon Wilcox, farm grain origination manager at Cefetra Wessex.

“Barley that has gone down has probably failed, but the spring barley that is still standing seems to be holding out – by and large, germination is good on those,” said Mr Wilcox.

With 40% of the spring barley harvested so far, nitrogen has been variable at between 1.4% and 1.6%.

However, retention is a more pressing issue. “A lot are below 90% and that is just something to be aware of – it’s still making the grade, but we are assessing it carefully.”

In Wiltshire, harvest is largely complete for Josh Stratton at East Farm, Codford St Mary. “We had 450ha and we have done 350ha – all Laureate,” said Mr Stratton.

Although what has been cut was quite brackled, there is 100ha that is not ripe yet as it was later drilled, so is all still standing.

The quality has been good at 1.65% nitrogen, 63kg/hl, and a lovely bold sample, explained Mr Stratton.

Yields have been pleasing although slightly down on previous years. “We normally get about 9t/ha, but this year we have been down at 8t/ha, on average, on the spring barley. We’ve been cutting at 18% moisture so it’s all being dried.”

Rainfall stopped play early in the week, but Mr Stratton hoped to get back out on Tuesday (24 August).

“It’s been a bit painful, but with the forecast looking good, we decided to leave the combine standing and let the sun and wind dry everything through – then, hopefully, we will have a clear run.”