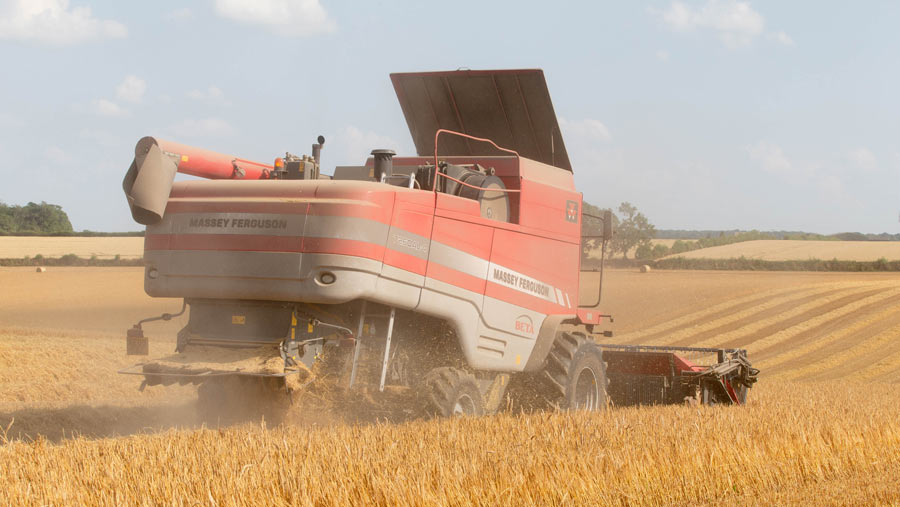 Combines are rolling up and down the country, with winter barley and oilseed rape producing steady yields after fair weather harvest windows.

See also: Is undersowing cereal crops with clover the next big thing?

But while yields averaged over 7.4t/ha as expected, the specific weights were disappointing at 63-64kg/hl. “It’s a familiar story listening to others – weather has a lot to do with it and the grain didn’t quite fill like it ought to.”

Old favourite Cassia topped the table, followed by Orwell, with Tower bringing up the rear. “I was glad we only put a small amount in. I’m not an agronomist, but it seemed to have a bit of every disease,” he says. “Being where we are we get a bit of disease and aphid pressure, but the other varieties stood up to it.”

Mr Collins is now waiting for the 202ha of spring barley to ripen. “It’s looking well in the field. There’s some lodging on the headlands, but it’s minimal so I’m not concerned.”

Further north, Richard Bruckshaw is fresh into this year’s harvest at High Ercall, Telford, having cut 36.5ha of the 85ha of Expectation and V367OL oilseed rape.

After the rapeseed is finished he will move into the 6ha of Planet spring barley grown for seed – expecting an average yield of 7.4t/ha – followed by 109ha of Gleam and Siskin winter wheat. “We grow predominantly for feed, but there is a chance of a premium this year I think.”

“Overall, we are pleased with the crop – it’s the best looking OSR we’ve grown in 10 years,” he says. “We cut three fields; yielding 3.6t/ha, 3.7t/ha and 3.8t/ha, which is up to 1t/ha down on our yield expectations, but I think the April frosts caused some blind pods.”

Gravity, Saki, and Skyscraper make up the majority of his 120ha of winter wheat, with Grafton as a second wheat and 45ha of Belepi spring wheat. “They are potentially very good this year.”

Later in the year he will be combining 25ha of Tundra winter beans and 30ha of combining peas. “We expect them to average 5-6t/ha – we haven’t grown peas for 20 years and they look good.”

Richard Beachell also had a good start to harvest at Field House Farm, Bainton, where he has finished combining winter barley.

“The weather was fine – we managed to do all the Craft winter barley at 14% moisture – yields were pleasing at 7.5t/ha and we might see a bonus with the nitrogen at 1.6%,” he explains.

Quality isn’t an issue, with no disease challenges and specific weights of 67-68kg/hl – however screenings are a slight concern.

Mr Beachell is hoping for decent weather next week (2 Aug) to start combining his 45ha of winter oilseed rape, Campus. “It’s the best it’s looked in a few years and we’re hoping for around 4t/ha.”

Thereafter, he has 182ha of Firefly and Gleam winter wheat and 45ha of Laureate spring barley to harvest.

“Neither will be ready for at least another until two to three weeks – and that’s only if the weather is right. “We are expecting to see wheat exceeding 10t/ha across the board.”