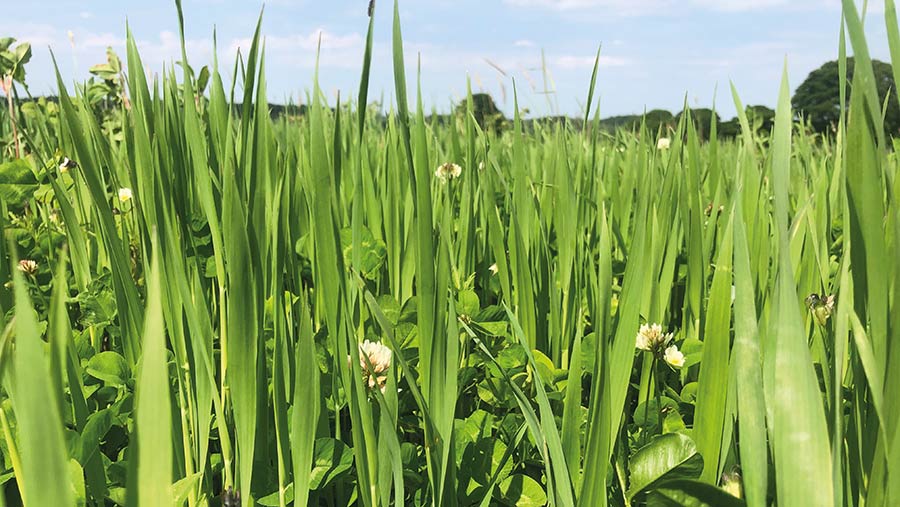 In a field lab trial last spring, six farmers from across England attempted to grow a living mulch cover, which they believe will help build soil fertility, sequester carbon and cut costs.

Using a seed mix comprising 70% small-leaf and 30% medium-leaf white clover, the group of conventional and organic growers hope to find out if growing the mulch can be achieved without significantly affecting crop yields.

Out of the seven trial fields, four were successfully established in the project run through the Innovative Farmers programme, before direct drilling into the mulch with an autumn cereal crop.

We catch up with three farm triallists to find out how they’re getting on. 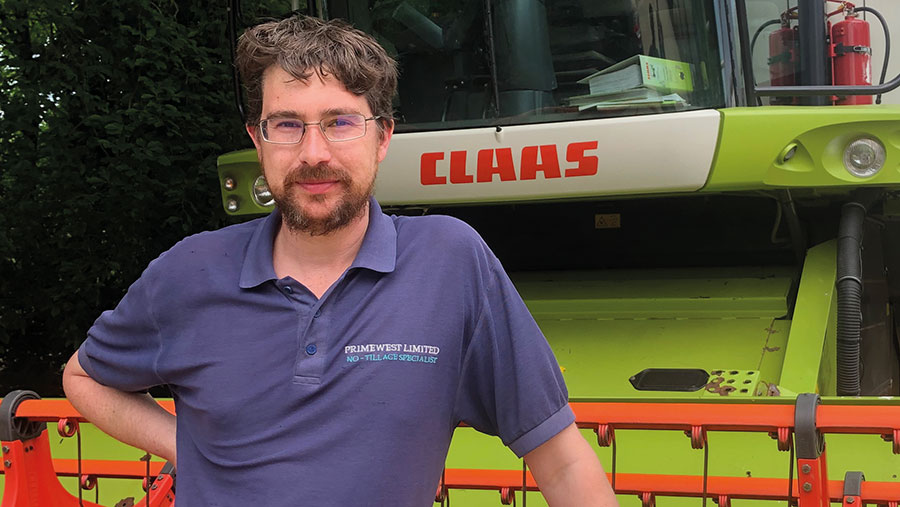 Oxfordshire contract farmer and no-till specialist James Alexander is one of the growers trialling the living mulch over his conventional and organic land.

He hopes undersowing with clover will reduce weed pressure and promote soil health, thereby reducing the need to plough on organic land, as his ultimate aim is to develop an organic no-till system.

Mr Alexander farms 607ha of arable land – 320ha of which is organic – and has been cutting back inputs in conventional practices as much as possible, using no-till and cover crops.

“Currently we have to take one-third of the organic land out of production every year for clover leys, so we are losing a lot of productivity. If the living mulch works though, we could drill directly into it.”

In May last year, he drilled a 3ha plot of clover directly into both an organic and conventional spring barley crop at the T1 stage, using a Horsch drill.

The mulch on the organic land established “perfectly”, at a rate of 7.5ha across the farm’s Cotswold brash soils, he says. The clover did not exceed more than 7.6cm in height and caused no issues when it came to harvest.

Mr Alexander even recalls a slight yield increase in the barley, which he suspects was due to the nitrogen-fixing capabilities of the clover.

However, he admits that the mulch establishment was a bit patchy in places, but after harvest it filled out nicely to form a complete ground coverage which he is “really pleased with”.

Unlike the organic clover, the clover on the conventional land failed to establish, despite being drilled with the same drill, on the same day. Mr Alexander believes synthetic nitrogen residues could be the culprit and has since re-sown the clover.

Currently, a winter oat crop planted in the third week of October is growing in the organic living mulch, planted in 20cm-wide rows, with promising results so far.

“The oats stood proud over the clover all winter and those crops grown in the mulch are looking taller, darker and stronger than our farm standard, due to improved nitrogen fixing,” he says.

But with the farm sitting 290m above sea level, crops were left exposed to May’s cold and wet conditions, which severely impacted crop growth.

“The crop was one month behind due to the cold weather and such slow growth could lead to the mulch outcompeting the cereal crop,” he warns.

One way of dealing with this problem could be grazing the clover off over winter to limit its growth and in turn stress the clover, which releases nitrogen into the soil.

Going forward, Mr Alexander has a range of potential rotation plans. He will leave the clover and either put it into a second oat, beans or add grass to make a grass ley. 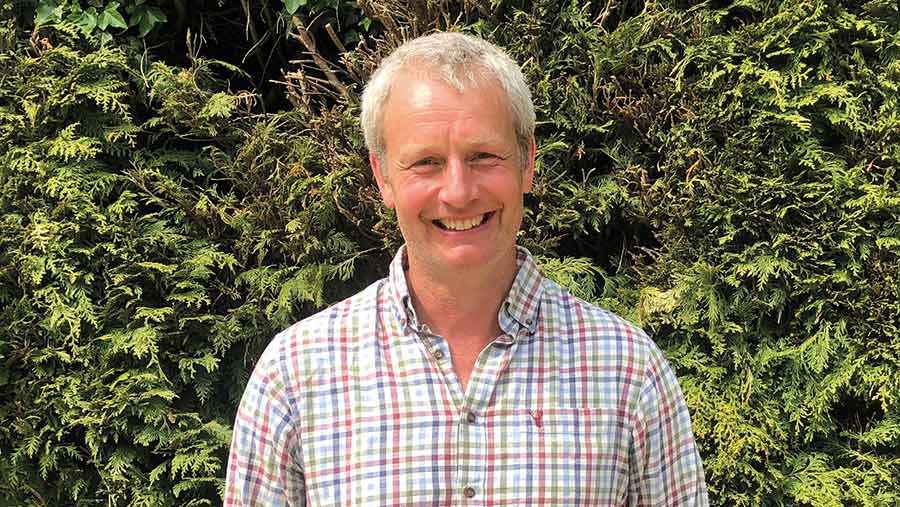 As an organic farmer, grass leys play a key role in building soil fertility and grazing for his flock of 800 sheep at Lower Field Barn, where 50% of the 340ha area is down to grass at any one point.

“We need grass leys for the sheep and soil-fertility building, but it seems stupid to keep killing off the grass only to regrow it again, since it all takes time, money and fossil fuels,” says Mr Stephens.

“The principle of it is absolutely doable, and the potential of this working is massive. It offers financial and environmental benefits from all different levels – farm efficiency, fuel consumption and wildlife,” he says.

However, his clover mulch unfortunately failed to establish last spring at the farm near Pershore due to drought conditions, which brought a strong emergence of ryegrass and other weeds.

He is trying again this year, after ploughing the land in February to remove the weeds. He is growing the mulch alongside a nursery crop of oats to aid establishment, where the clover and oats were planted in April.

“We’re sacrificing the oats in order to get a good crop of clover,” he says.

In addition to the trial standard (70% small-leaf and 30% medium-leaf white clover), which aims to offer good ground cover, an entire plot of medium-leaf clover has been sown, which he hopes will provide greater competition against weeds and promote sheep grazing.

Mr Stephens plans to graze his sheep flock across the mulch from autumn until January and as he wants the system to be flexible as possible, he has also adapted a CTM Weedsurfer to inter-row mow the living mulch.

“I will use the inter-row mower, to try and control the mulch and encourage the clover to drop its nodules, when the crop would be damaged by grazing,” he says. 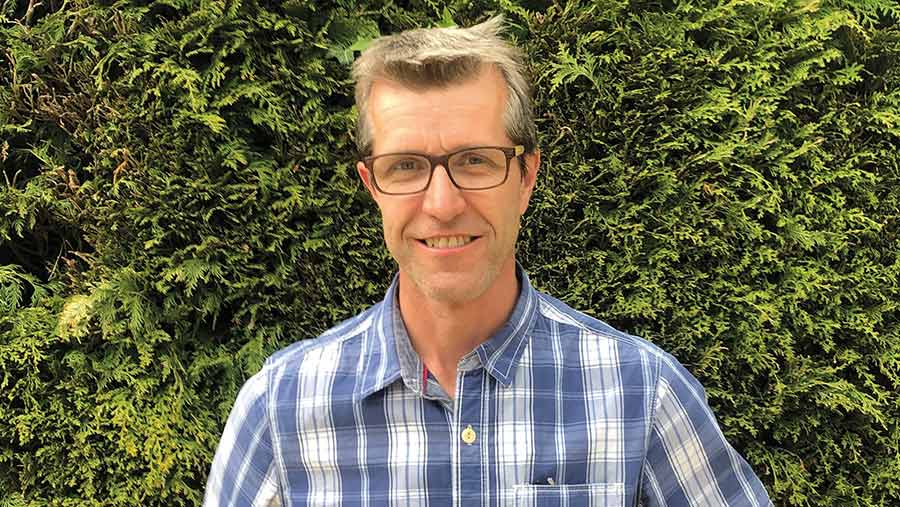 Mixed sheep and arable farmer Mark Lea runs trials every year on his 180ha organic farm in Shropshire, but says the living mulch trial has more potential than anything he’s ever been involved with before.

“I don’t think I’ve ever been involved with a trial that I thought was potentially quite so significant. It’s certainly not easy, but the prize is so great and so wide-reaching,” he says.

Mr Lea managed to successfully establish his living mulch into sandy loam soils in May 2020, by broadcasting clover seed into a spring wheat crop at 7-10cm tall, before the wheat enters its stem extension phase and grows rapidly through the early summer months.

After harvest of the spring cereal, sheep grazed the clover for three weeks to suppress its growth, before direct drilling winter rye and oats into the two 2ha clover blocks grown on his farm.

“We’ve done something I wouldn’t have thought was possible two years ago, and so far it’s worked.”

“As we approach harvest, the crops look well and I don’t see any harvesting difficulties. The yield penalty isn’t yet known, but we can certainly accept a reduction as there have been significant cost savings,” says Mr Lea.

The benefits of a living mulch

This, in turn, benefits the main crop,  says Dominic Amos, senior crops researcher at the Organic Research Centre – the research firm involved with the farm trial.

“The two key services that need to be delivered for a living mulch system to best contribute to agricultural productivity are weed control and nitrogen supply,” he says.

He continues that a wider range of benefits can also be gained from the establishment of a successful living mulch such as:

It is hoped that by using a permanent living mulch, no-till farmers can also reduce reliance on glyphosate to make the system work, as it removes any need to terminate temporary cover crops.