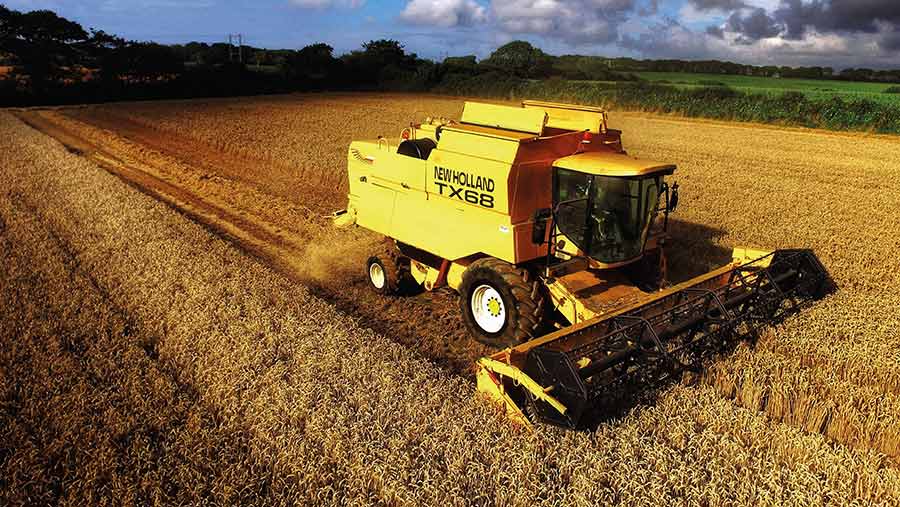 Nick Dymond’s unique cropping approach of not using fungicides or insecticides and a focus on crop nutrition has seen yields of his Extase winter wheat peak at 10t/ha.

With specific weights as high as 78kg/hl, five years ago Mr Dymond noted a significant improvement in grain size after cutting back on chemical inputs and optimising plant nutrition.

His latest crop came off at 17.5% moisture, with an average yield just shy of 9t/ha at his Cornish farm, near Truro.

It was after Mr Dymond attended a meeting discussing the use of chemicals versus nutrition and its impact on crop health, he realised that his farming practices had to change.

“I was of the chemical generation, but our yields had stagnated, cost of production was increasing and chemical resistance was on the rise. I knew something had to change,” he said.

He now puts his faith into nature and believes that healthy plants have improved abilities to withstand disease – similar to that of healthy plants withstanding pest attacks.

“Cutting back on fungicide inputs felt right as I didn’t feel particularly comfortable using chemicals, particularly from a safety perspective,” he said.

Although no fungicide or insecticide applications are applied to his Extase and Graham varieties at the 250ha Trevispiean-Vean Farm, crops are not grown under organic status.

Mr Dymond kept his options open by having the security of being able to use chemicals in a strategic manner, if required.

“Our biggest focus is nitrogen applications, as when nitrogen is taken up by the plant, crops become more vulnerable to disease,” explained Mr Iliffe.

Detailed soil testing in the autumn also helps pave the way for improved crop performance, while plant tissue analysis and sap testing, which is carried out every seven to 10 days throughout the growing season (starting in March), helps correct any nutritional imbalances.

Mr Dymond also grows a few conventional fields, where fungicides are applied. Each year for the past five years, his fungicide-free crops have delivered a better margin and often outperformed the chemical crop on grain and straw yield.

Fungicide-free crops are direct drilled into maize stubbles or brassica vegetable crops such as cauliflower and broccoli. A Vaderstad Rapid drill is used at a seed rate of 140kg/ha and crops were planted during the second week of October.

Mr Dymond rotationally ploughs every three to four years, but tries to keep this to a minimum, as up to 30% of organic matter can be lost from the soil with each pass of the plough.

Organic matter levels are now well over 6%, aided by the growth of brassicas that provide a lot of green matter back to the soil as well as manure applications.

Cover crops of phacelia, vetch and oats are also sown between crops, as soils are never left bare. As glyphosate applications are not used to remove the covers, they are flailed and then incorporated.

However, cutting back on inputs isn’t always plain sailing. Mr Dymond unfortunately had a low-yielding block of winter barley, which suffered from poor establishment after he trialled direct disc drilling into maize stubbles, without any prior cultivation.

Looking back he believes, an early growth regulator application to help encourage tillering early in the crop’s development would have been beneficial.