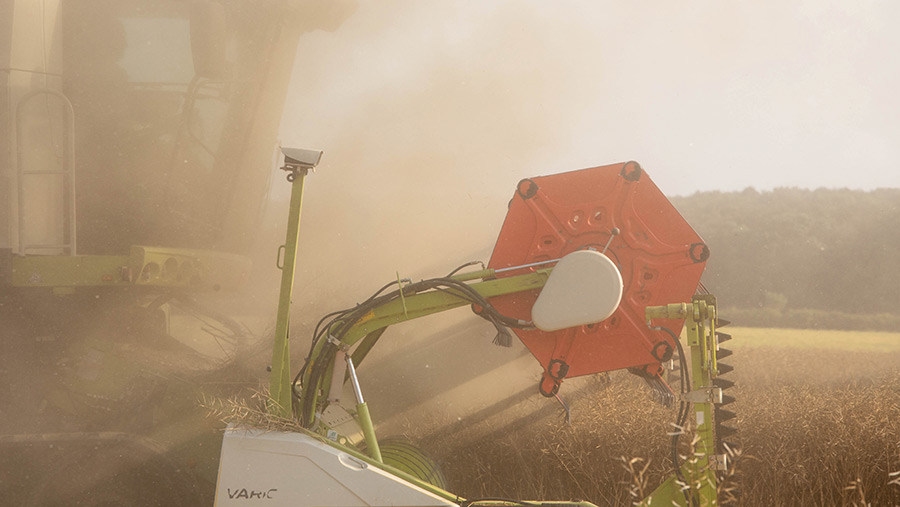 After a late start and an unsettled spell, merchants are anticipating a rush with better weather forecast in the coming days.

We round up how harvest is progressing around the country.

In East Anglia, Andrew Dewing, managing director at Dewing Grain, has already seen some highs and lows – but believes a little pessimism can yield a few pleasant surprises.

Winter barley is variable, with malting varieties yielding particularly well. “There has been some retention, but overall good, usable grain with low nitrogen,” he said.

Oilseed rape has come in below the 4t/ha expectation, ranging from 3.2t/ha to 3.6t/ha, with oil content averaging 41%. “The oils can be put down to the lack of sunshine right when the crops needed it.” Mr Dewing said.

But winter wheat on lighter land will be a pleasant surprise. “Normally averaging 8t/ha, but this year we have seen 10t/ha after drying. Where there is milling wheat, growers are achieving good hagbergs.”

Spring barley is a crop to watch. “We’ve seen big, bold grain with low nitrogen and very good yields. There’s a lot of life in the malting market and with yields up to 8t/ha, it’s a profitable crop.”

Heading west, store manager Izzie Lawrence at Trinity Grain anticipates a rush with the weather forecast to improve this week.

“We are behind, with about 10% of grain in store,” she said. “We’ve taken around 10,000t in winter barley, namely Craft, oilseed rape, winter wheat, oats and some malting spring barley, namely Planet.”

Yields on winter barley have been mixed, with specific weights averaging 63kg/hl. “The grain looks nice with good colour, and while retention was a concern, the grain is actually doing OK.”

Oilseed rape may not have thrilled with yields, but it has yielded better than last year. “Overall it looks nice and has come in around 7% moisture with oil content up to 45%,” said Ms Lawrence.

Winter milling wheats Zyatt and Skyfall are popular varieties, with the former the strongest performer. “Zyatt has performed well with proteins around 12.7-12.8% and hagbergs into the 300s,” she said.

In the South East, Richard Spencer at Garrington Farm has had a less-than-ideal start, with the absence of a good spring holding back crop potentials.

Starting a week late (23-24 July), 16ha of Hawking winter barley yielded light at 8t/ha on an expectation of 10t/ha – and with specific weights at 59kg/hl there was more disappointment.

His 135ha of Campus winter oilseed rape proved a mixed bag. “Yields ranged from 2.25t/ha to 3.95t/ha, with the difference largely down to flea beetle,” he said.

Mr Spencer has made a start on his winter wheat (on 5 August), combining 50ha of his 500ha of Zyatt – and is hoping for milling quality.

“Proteins have been up on previous years at 12.8% with specific weight at 76kg/hl,” he said. “Hagberg is 310 and while we don’t have crop disease concerns at the moment, persistent wet weather could change that.”

Heading North, the winter barley harvest has finished for East of Scotland Farmers, with good quality and high specific weights, according to general manager Robin Barron.

Yields have also been good at an average of 8.4t/ha across the 6,000t taken in by the store. Moisture content has averaged 15% with specific weights at 63-72kg/hl.

On the feed barley, Mountain is the standout variety, having achieved nearly 10t/ha and a specific weight of 72kg/hl.

The oilseed rape harvest has barely started with just 100t seen so far, while the few samples of spring barley which have come through have pleasing quality with low nitrogen content.

“There is some spring barley ready, but with the patchy forecast we’re waiting to get going, there is a concern that if the weather comes right, everything will be ready at once,” he said.