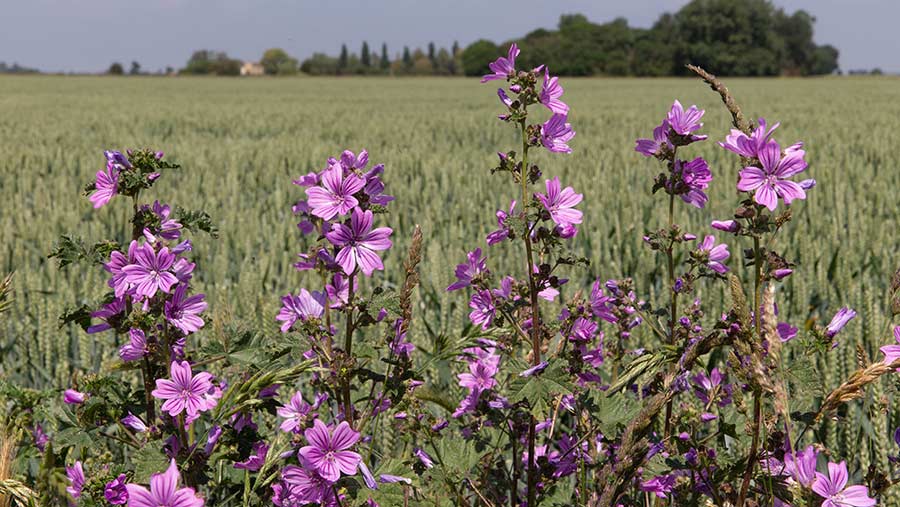 Tackling crop pests is increasingly challenging, with growing pesticide resistance and fewer active ingredients, which is why more farmers are looking to integrated pest management techniques such as flowering strips.

Flowering margins can be helpful in promoting natural predators, but they will travel only so far into the field, meaning few benefits are seen away from the field edges.

The aim of in-field flowering strips is to improve the spill-over of natural pest control – beneficials – into fields. Insect pollination can also increase crop yield and quality.

“Beneficials tend to drop off after around 50m, with the greatest number found near the field boundaries,” says Richard Pywell, head of biodiversity at the UK Centre for Ecology and Hydrology.

“This is why putting a wildflower strip in the middle of the field can increase the number of beneficials found in the crop.”

See also: Q&A: How one farmer upgraded his grain dryer and storage

When establishing the strips, field margins should be at least 6m wide and run the length of the two longest sides of the field.

Internal strips should also be 6m wide, running through the centre of the field – separation of three boom widths (96-108m) should fit the tramlines and they do not need to connect at the headland.

South facing, sunny field margins are the best location as pollinators and hoverflies like sun, but Prof Pywell also says you should consider what time of year the strip will be flowering and which beneficials will be attracted.

In terms of what to include in the seed mix, a ratio of 4kg/ha of wildflowers to 10kg/ha of grasses is recommended.

This mixture should benefit habitats of both ground-dwelling beneficials such as ground beetles and provide habitat for flying beneficials including parasitic wasps, bees and hoverflies.

“Often the strips will be put into land which is in production, so it has high quality soil that’s great for growing crops, but a lot of the plants in the strip mix don’t actually like high nutrition soil,” he adds. 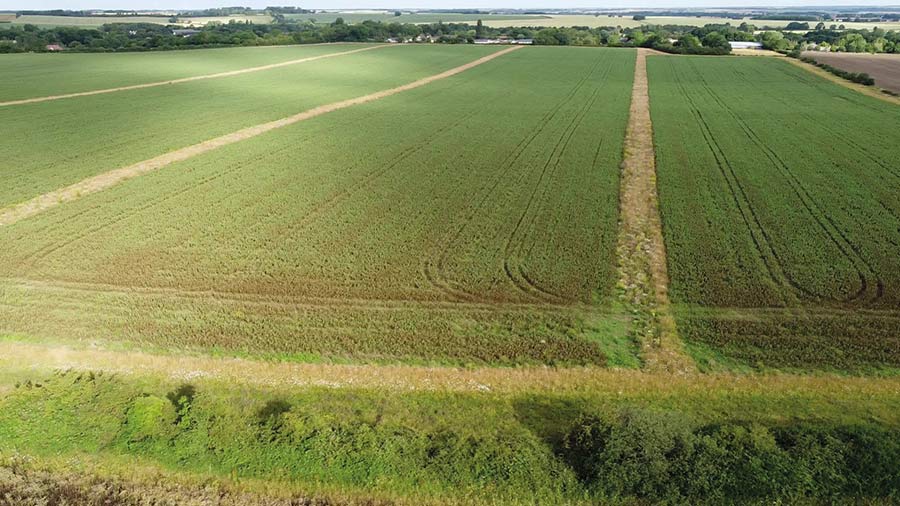 Simple flowers work best, as well as a mix of early and late flowers, annuals and perennials.

“Mixes which are designed for pollinators will have deep flowers because bees and butterflies have long tongues which can go deep into the flower to get the nectar, but these mixes won’t be suitable for beneficial insects in terms of pest management, because they can’t get the nectar,” says Dr Ramsden.

Wildflowers which could be included:

Grasses which could be included:

The strips can also provide a winter habitat for flora and fauna, as well as alternative prey for beneficial insects – so it is important to keep the strip in over the year, and ideally for several years.

When and how to drill

A firm and fine seed-bed is optimum for establishment; the soil needs to be fine enough for the seeds to remain on the surface when sowing.

“They need to be broadcast as they are very small seeds, so if they are buried they just won’t come up,” says Prof Pywell.

“The better the seed-bed, the lower the seed rate,” he adds. “If you can get a good seed-bed and get the weeds under control at the beginning, you will save yourself money in seed – you won’t need as many seeds to get success.”

There are two drilling opportunities, in the autumn and spring. “Late August is the optimum time to drill, early September at the very latest. In the spring, it would be April when the soil temperatures are right,” says Prof Pywell.

It is advised to roll after sowing to ensure seed-to-soil contact.

The first year will mainly be managing weeds. “Don’t expect an amazing floral bouquet to pop up in the first year because it’s not going to happen unless you’re very lucky,” says Dr Ramsden.

The strips need to be mowed and, if weed pressure is high, three or more cuts might be necessary. “It will need mowing pretty regularly to keep the weeds down and keep the grass under control,” he adds.

“Collect the cuttings (rather than mulching them) so that the floral plants have a better chance of establishing. Once you’ve got it going, later cuts in the summer are possible – July and August are the best time to cut after most of the flowering has happened,” he says.

“Dry the cuttings in place and then remove them – so the seeds will disperse back into the margin,” adds Dr Ramsden.

Make a final cut when growth has stopped around mid-September, then after the first year – depending on weed pressure – a single autumn cut will be required. If it is not possible to collect the cuttings, more frequent cutting is less likely to leave a damaging mulch on the strip.

“Do remember that if you’ve got a low population of beneficial species to start with, it may take a few years for those to build up and really start to pay dividends in terms of crop protection – it’s not going to happen overnight,” he adds.