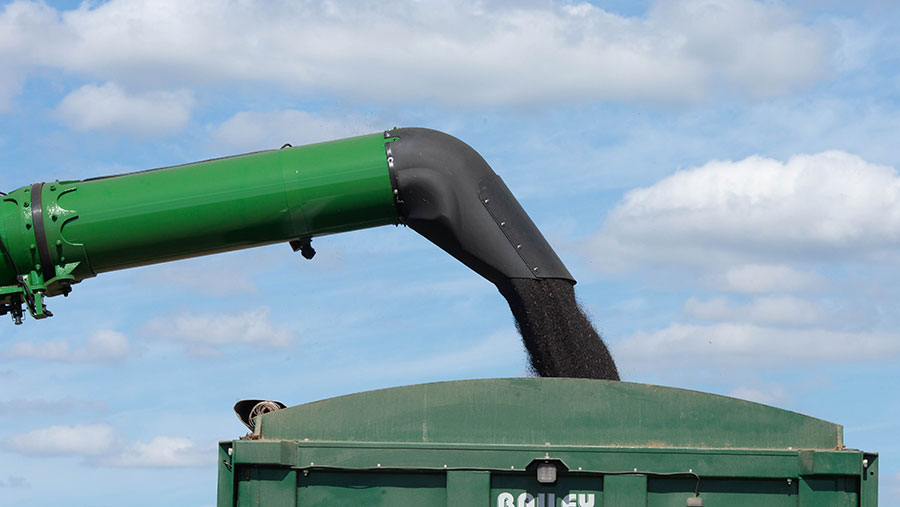 It was Mr Chappell’s approach to tailoring crop nutrition that saw nitrogen applications driven down to their lowest ever rate at Chappell Farms, near Scunthorpe.

With harvest running two weeks ahead of schedule due to hot temperatures, crops seem to be turning fast, with relatively dry moisture contents.

“Starting on 13 of July at 8.30am, moisture content was 15%, but this dropped to 5% by 2pm. Meanwhile, the following day we started at 9.30am and moisture levels were already as low as 6%. By the afternoon we had to stop, as moisture was too low,” he says.

By closely monitoring crop performance through green area index (GAI) measurements and regular sap and tissue tests analysis, the low-input crop, which had followed a year of fallow, came into the spring with a GAI of 3.5.

After attending a number of oilseed rape webinars, Mr Chappell realised he didn’t need to apply such high levels of nitrogen to the crop considering its GAI.

“You can only feed what’s in front of you, and with this amount of crop biomass we knew we could significantly cut back nitrogen rates. This is why measuring and managing crop nutrition is so important,” he says.

Opting for an early drill date of 8 August in order to hit soil moisture content and make the most of Duplo’s rapid growth, the crop was planted with a Triton direct drill.

A sustainable phosphorus source known as Crystal Green, derived from the water industry and similar to diammonium phosphate, was placed down the spout with the seed.

In the spring, 30kg/ha of ammonium sulphate was applied to the soil, followed by a foliar nitrogen spray at flowering.

A few years ago Mr Chappell was applying 220kg N/ha across most of his oilseed rape area to achieve a similar yield, but now he is cutting costs and gaining a greater margin.

He has focused on a 10% nitrogen reduction year on year, feeding crops on a field-by-field basis.

With such a positive experience growing the variety Duplo for the first time this year, Mr Chappell is contemplating planting his whole rapeseed area to the variety next year, but he is wary of putting all his eggs in one basket.

“Duplo’s rapid and vigorous growth is a very worthy trait and can compensate for early drilling dates. It is also robust enough to take on a build-up of cabbage stem flea beetle larvae and come out the other side,” he says.

Next on the harvest to-do list will be spring oats, which are turning rapidly, followed by winter wheat, which looks as if it could be about 10 days away.

Colin Chappell’s winter barley harvest kicked off two weeks early on 7 July, and he says he is astonished about how well it yielded.

Yielding 9t/ha with a specific weight of 70.9kg/hl, he was blown away by how well the six-row hybrid variety Bazooka performed.

“We put every trailer over the weighbridge to find that it was coming back as the same weight as a trailer load of wheat,” he says.

He puts this down to having such a good sunlight season, with solar radiation levels through the roof. This has driven grain fill, as did the use of a foliar potassium spray and applying 150kg N/ha.