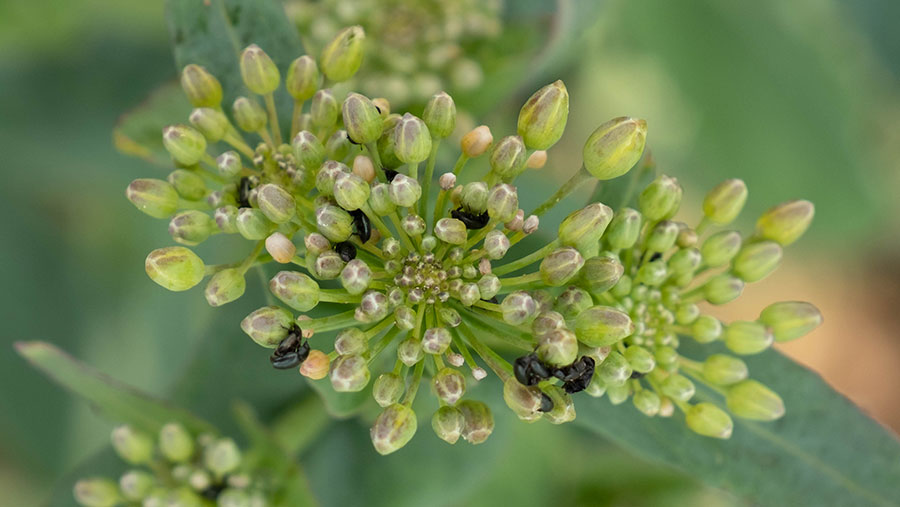 A survey from the NFU has revealed a significant drop in oilseed rape yields for the UK’s 2019 harvest.

Rapeseed yields have fallen to 3.4t/ha, below the five-year average of 3.6t/ha, due to heavy cabbage stem flea beetle pressure.

Farmers from across the UK have battled the pest since the loss of neonicotinoid seed treatments in 2018.

Tom Bradshaw, NFU combinable crops board chairman, said: “The glaring result from this survey is the significant drop in rapeseed yield, which can almost certainly be attributed to the loss of effective plant protection products to control pests.”

As a result farmers were reducing the area of oilseed rape grown, he said.

“I have heard from countless farmers that they’re questioning whether it is worth growing the crop, demonstrating how crucial it is to have an agricultural policy that gives farmers confidence to grow crops, not the opposite,” said Mr Bradshaw.

Oilseed rape is a vital break-crop for the arable sector and is crucial to a broad rotation. It has a huge demand across a wide range of products including food, cosmetics, plastics, energy and animal feed.

“If farmers stop growing this crop, we will simply become more reliant on imports of oilseed rape and other oil crops, either produced with products which are illegal in this country or being produced with a huge environmental impact,” Mr Bradshaw said.

British farmers and the arable sector would be severely undermined as a result, and this was why the NFU had called for the government to ensure that any new domestic agricultural policy looked for solutions to make growing oilseed rape viable for the future.

“We need a future plant health strategy that allows farmers and growers to harness innovation while providing growers with solutions to run sustainable businesses,” he said.