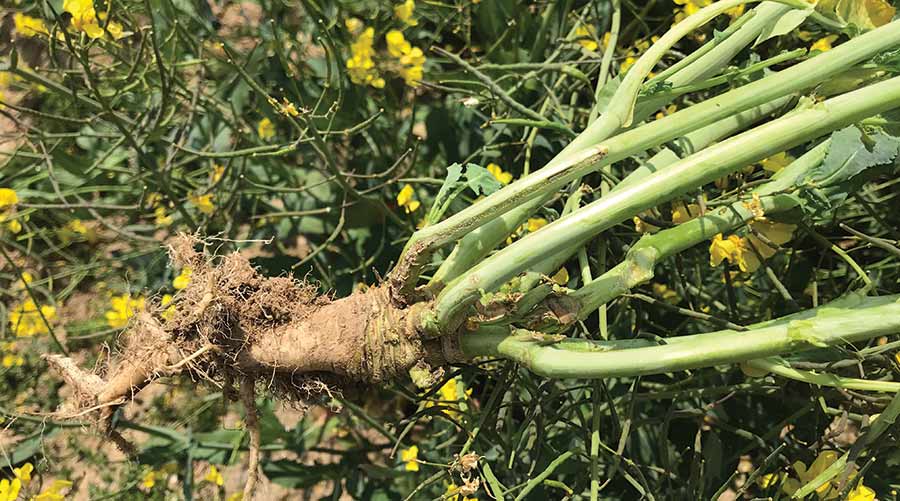 An on-farm trial of defoliation methods in West Sussex has reduced cabbage stem flea beetle larvae numbers by up to 61% this spring.

Larvae numbers in grower Paul Helyer’s oilseed rape crops at his farm near Chichester, part of the Plain Farming Group, had jumped up from one or two larvae per plant in recent years to well over 10 per plant this season.

One of Mr Helyer’s agronomists, Jonathan James of Chichester Crop Consultancy (CCC), took larvae counts across the farm in December.

This was as part of his work co-ordinating the Association of Independent Crop Consultant’s cabbage stem flea beetle national survey, where he found very high numbers in certain fields.

As a result, Mr Helyer is one of several growers taking part in an Innovative Farmers Field lab this season, trialling defoliation by both grazing and mechanical topping.

“While we could still grow the crop, we wanted to develop a sustainable means of growing it,” says fellow CCC agronomist Richard Cartwright.

In the autumn, larvae move into the plant’s petiole to overwinter before migrating to the stem in the spring, when they do the most damage.

Defoliating the newer leaves works in two ways – by removing the older leaves, larvae are unable to migrate to the stem in the spring, while also exposing the larvae to the cold.

Mr Helyer drilled 50ha of varieties Elgar and Imperial using a Vaderstad min-till drill in the last week of August.

He holds off from drilling too early as being on the south coast crops can get too large, and the highest numbers of larvae are associated with the earliest drilled crops, according to AICC data.

In the grazing trial, sheep from a neighbouring farmer started grazing the crops around 17 December at a net benefit to Mr Helyer of between £10/ha  and £20/ha.

Ideally, to not affect yields, the sheep need to be moved off the crops by the middle of January.

At this stage of the trial, both Mr James and Mr Cartwright say grazing is the best method of defoliating, as the sheep eat most of the petioles, or trample them.

However, for Mr Helyer, despite the small additional cost of topping of £10/ha, mowing would be his preferred option when considering the total 160ha of OSR crop grown by the Plain Farming Group.

“With topping there is a small cost, but from a timeliness and workrate point of view it is better. To do grazing we would need thousands of sheep,” he says.

Although a much larger area can be defoliated in a short space of time, a level seed-bed is critical to ensuring the crop can be consistently removed, and conditions in December must be fit to travel.

Two fields topped at the same time showed a 14% and a 49% reduction in larvae numbers, while untreated plots had 37 larvae per plant.

This season, the topped crops are shorter than the grazed ones, while in previous trials they have been shorter.

“The ability of the crop to recover is very much related to the inherent yield potential of the soil.

“The critical thing is the timing of the defoliation and making sure to get the nitrogen plus sulphur on early to rebuild the green index area,” says Mr Cartwright.

Crops on poorer soils are two weeks behind those on the best soils, but flowering will be delayed in all defoliated crops.

High levels of pollen beetle meant that all of the defoliated crops have had to be treated.

In a very good year Mr Helyer would expect to achieve 4.9t/ha.

For topping to be worthwhile, Mr Helyer says he would need the mowed crops to achieve 4.32t/ha at harvest, and the untreated areas to yield substantially lower.