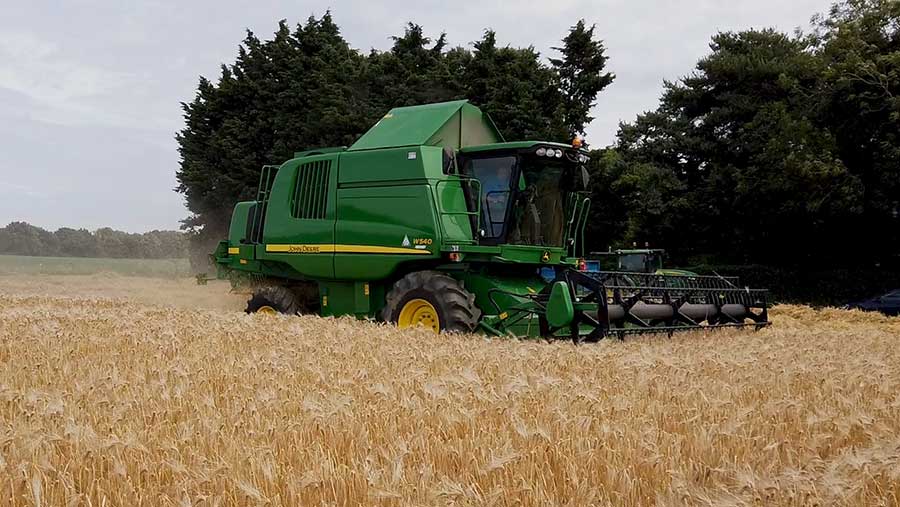 Cereal harvest is now underway in East Anglia, with Norfolk grower Mike Dennis pleased with the yield and quality of his winter barley, after a very wet winter and parched spring.

Farming on light land on the northern edge of Breckland, near Swaffham, the yield of his six-row conventional barley variety, Funky, was showing an average of 7.5t/ha. This is in line with last season, with no lodging seen in the crop.

The combine was fired up a few days earlier than normal and raced through nearly 3ha of his earliest crops, with only a little bit of green in the straw and grain moisture a touch over 14%.

“Six-row barleys suit this light land; they come to harvest early, and we are pleased with the yield,” Mr Dennis told Farmers Weekly, as the farm started its cereal harvest on the last day of June.

The early harvest is particularly welcome, as all the farm’s barley and wheat is used to feed the 200-strong outdoor sow herd – producing weaners for fattening – and grain stocks were running low.

No grain is sold off-farm, but the grain sample looked to be over the feed compounders’ minimum standard of 63kg/hl for barley.

The winter barley was drilled early in mid-September and received more than 150kg/ha of nitrogen with no plant growth regulators used, as the farm needs all the straw it can bale for the pig herd.

Mr Dennis runs the 64ha Kings Row Farm – in North Pickenham, some four miles south-east of Swaffham – with his two sons, Colin and Christopher, as MP Dennis & Sons, along with a contracting business.

He has a total of 12ha of winter barley to cut over the next few days. He will then move into Skyscraper feed winter wheat and, finally, spring barley. The farm also grows sugar beet.

The barley and the soft feed wheat are fed into the farm’s own mill, and are mixed with soya beans and fishmeal for pig rations.

Small pockets of winter barley were being harvested this week on the lightest land in East Anglia, but the main winter barley harvest in the region is likely to start next week.

This season’s UK winter barley area is forecast down 23% at 347,000ha, according to the AHDB Early Bird Survey, while the spring barley area is up 47% to 1.042m ha, making the overall barley area up nearly 20%.

Although grain traders are pencilling in a much lower wheat crop at 9.5-10.0m tonnes, after 16.2m tonnes in 2019, due to a fall in the area, they see a largely unchanged barley crop putting the emphasis on exporting any surplus.

Tom Eaton, grain trader at Glencore Agriculture, says taking a five-year average of barley yields, he sees a crop of about 8m tonnes this year after 2019’s 8.05m tonnes.

One of the UK’s biggest export markets is the EU, so there will be pressure to trade before 31 December 2020 if Britain leaves the EU without a trade deal. Feed barley prices at about £128/t ex-farm may have to dip slightly to attract other buyers.

“We are trading at export parity with the European Union at the moment, but prices may have to drop $5/t to interest the North African barley market,” he says.