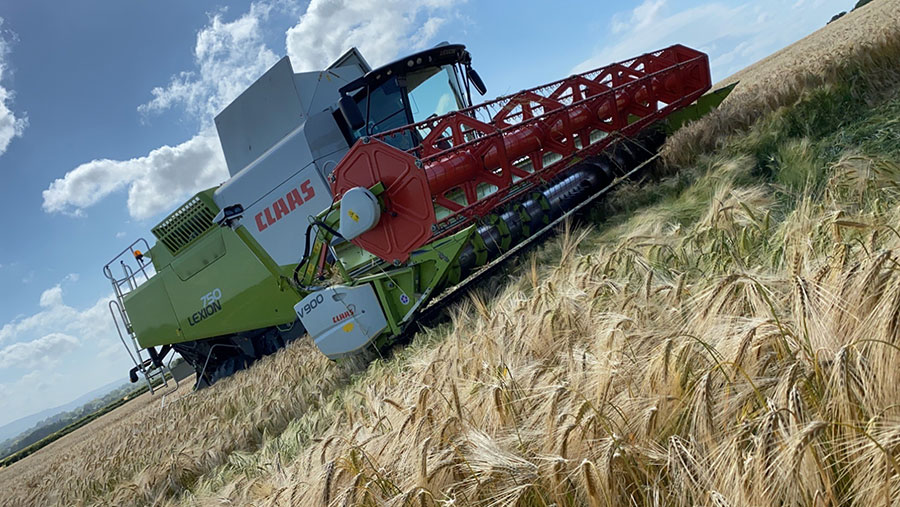 Harvest 2020 has begun at Higher Woodlands Farm, near Taunton, Somerset, where the Lucas family started cutting their winter barley crop, ready for crimping for livestock feed on the family’s 650ha mixed beef, dairy and arable farm.

A total of 65ha of hybrid six-row variety Bazooka was planted – one-third of which is now being harvested at 25-35% moisture, with yields averaging an impressive 12-13t/ha of wet weight, which they assume is about 10t/ha dry.

The crop is rolled, crimped and treated with a preservative before it is ensiled and later used as livestock feed on their 400-head beef unit and 270-head dairy herd, where 150 beef cattle are finished annually.

“After crimping, the crop is pushed up into a heap and sheeted down in a pit, just like silage,” said Tom Lucas.

The preservative effectively controls the fermentation process of the crimped grain, reducing nutrient losses to ensure a high-quality animal feed, while also protecting against spoilage organisms which damage the feed once the clamp is opened.

Despite the unpredictable weather this season, Mr Lucas said the barley crop looked well throughout, and the farm team managed to drill their original cropping plans, but he admitted a few of their bean crops are a bit patchy.

“This year’s harvest has started two weeks earlier than last, and even the straw is good quality this year – it’s slightly green, as we are cutting it earlier than most would, but this causes no major problem for us,” he added.

This is the fourth year that the Lucas family have grown hybrid barley, as the crop consistently yields well and is effective at outcompeting blackgrass, aided by the farm’s diverse rotation, which keeps weed pressure low.

A second third of their winter barley crop will be harvested slightly drier at 18-22% moisture, where it is rolled and treated with propanoic acid, acting as a preservative so it can be stored loosely in a conventional grain store. The remaining area will be conventionally harvested in about 10 days’ time.

Next on the harvest to-do list will be 24ha of rye and 160ha of winter wheat, which will also be crimped and acid treated for livestock feed.

Meanwhile, a snap poll of Farmers Weekly readers has found half plan to bale more straw this year amid concerns of a possible future shortage, with plantings down following a year of weather extremes.