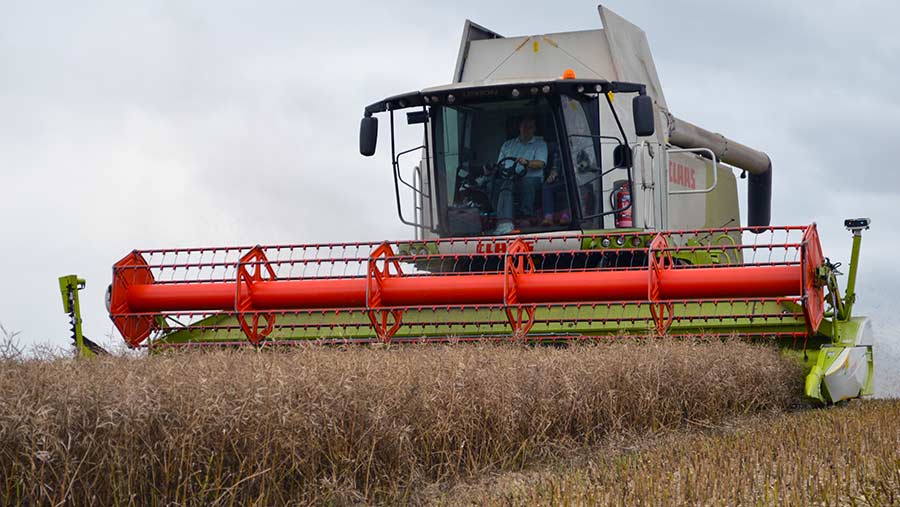 High on the Lincolnshire Wolds, grower Tim Lamyman is trying to break his own world yield record for oilseed rape and the omens look good.

There is thick carpet of oilseed rape ahead of the combine header, the crop is short and packed with long pods – the only problem appears to be the weather.

Dark rain clouds hang over the harvest field as Mr Lamyman tries to better his current world record yield of 6.7t/ha in 2015 – such a high yielding crop that it blocked the combine.

He had pushed nitrogen fertiliser rates up and used a programme of foliar feeds and micronutrients, and was budgeting for a bumper 7t/ha crop on one his most fertile fields.

Rain showers scurried in from the south west causing an hour-plus delay in the mid-afternoon, and serious rain arrived just as the last strips were being devoured by the combine in the early evening.

But after a “nightmare” period of sunless wet weather in the weeks leading up to the record attempt, the weighbridge punctured the early optimism and the yield fell short of a new global high.

Watch the video below to find out how the record-breaking attempt went.

So what went wrong with a crop which established well on this chalky soil and had an almost ideal growing season until flowering in the spring?

Mr Lamyman believes micronutrients mixed with fungicides helped the crop over a very dry period at flowering and then the heatwave in June, but it was the lack of sun in July which did for the crop.

“It looked like a good crop but the last two weeks hurt with 90% overcast skies not being conducive for a record attempt,” he tells Farmers Weekly.

This still came out as his top-yielding field from 120ha of oilseed rape grown on the farm, with his average yield of 4.9t/ha way ahead of an early estimate that this year’s national crop may average about 3.8t/ha.

The season had started so well for Mr Lamyman on his largely arable 600ha farm at Worlaby just over 20 miles east of Lincoln, on one of the highest spots on the upland chalky Wolds.

The new short-strawed conventional variety Django was chosen for a fertile field of red wold clay over chalk which was stiff enough to stay standing and yield a bumper crop. 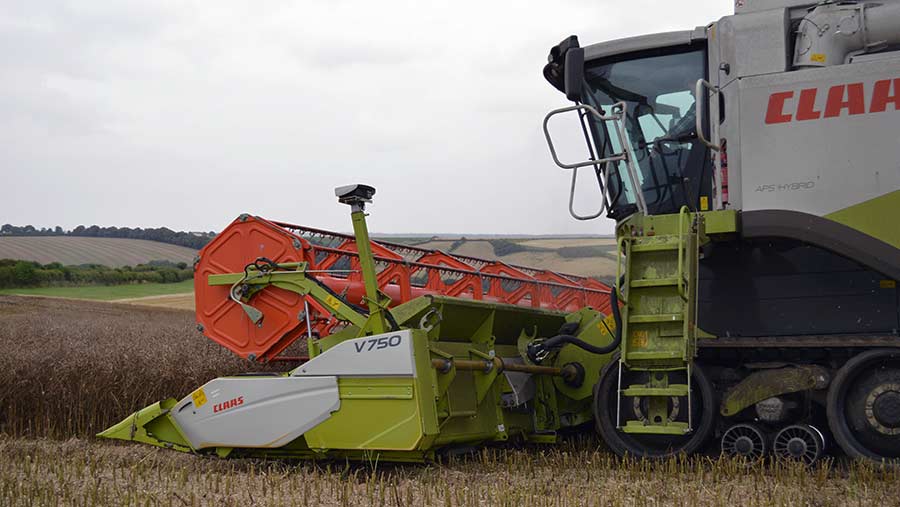 “We were looking for a variety that was short and stiff and so had the standing power when we were pushing the crop to its extremes,” he says.

Seed rates were at a recommended 4-4.5kg/ha for a conventional variety and the crop simply “sprang out of the ground”, had enough water through the early season and created a crop with a very dense set of pods.

Mr Lamyman used his well-tried foliar feed and micronutrient programme with three applications in the autumn and three in the early spring, often applied along with other sprays such as herbicides and fungicides.

A key test for the crop came with a dry period at flowering, when he fears that a lack of moisture can suck calcium out of a rapidly flowering crop.

“Any stress to the crop at flowering such as dry weather can strip calcium out of a flowering crop and so lead to flower loss,” he adds.

He used a calcium product (CalFlux) with his early flowering fungicide spray to enhance flowering and give good pod set, then added a boron and molybdenum mix (Rainbow Wave) as boron is often lacking in oilseed rape and is needed to help pollination and pod set. 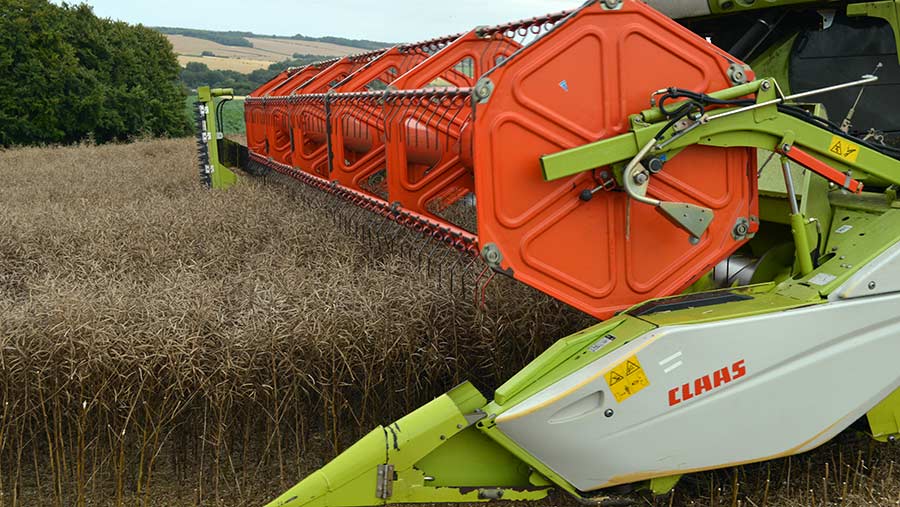 The foliar feeds and micronutrients are marketed by Anglo-Spanish group Ecoculture Biosciences and Martyn Pearce, the company’s business director, says the aim is to feed the plant to allow it to perform to its genetic potential.

“The aim is to stop there being a block to growth, so frequent applications are important to get nutrients to where the plant needs them,” he says.

Combining was relatively straight forward for the Claas 750 Lexion 25ft header, with Mr Lamyman describing it from the cab as an almost perfect carpet of pods before the rain struck.

Moisture content moved up from 10% to 12% with the rain showers and the combine grumbled its disapproval as it struggled with the damper crop.

However, the shorter crop definitely helped with the combining compared with two years ago when the taller Picto variety blocked the combine and the straw chopper had to be turned off. 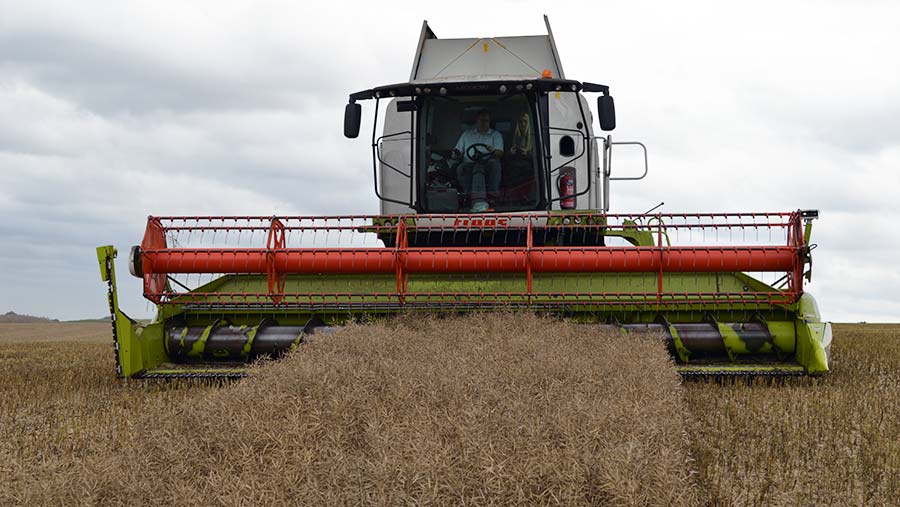 This season’s variety Django, like Picto, came from breeders KWS and the group’s oilseeds manager, Julie Goult, says as well as a good yield and oil content, it has good autumn vigour and disease resistance to impress crop consultants Niab. Both varieties are conventionals rather than hybrids.

“It is the highest oilseed rape variety that Niab has even seen in its trials,” she says.

The variety comes up for inclusion in the AHDB Recommended List at the end of this year, while there should be enough seed for 2-3% of the national oilseed rape area for drilling this summer, she adds.

For the world record yielding crop in 2015, the variety Picto was drill on 21 August at a seed rate of 2.5kg/ha, 220kg/ha of nitrogen was used and the crop cut on the 5 August to give a standardised yield for 9% moisture and 40% oil content of 6.7t/ha