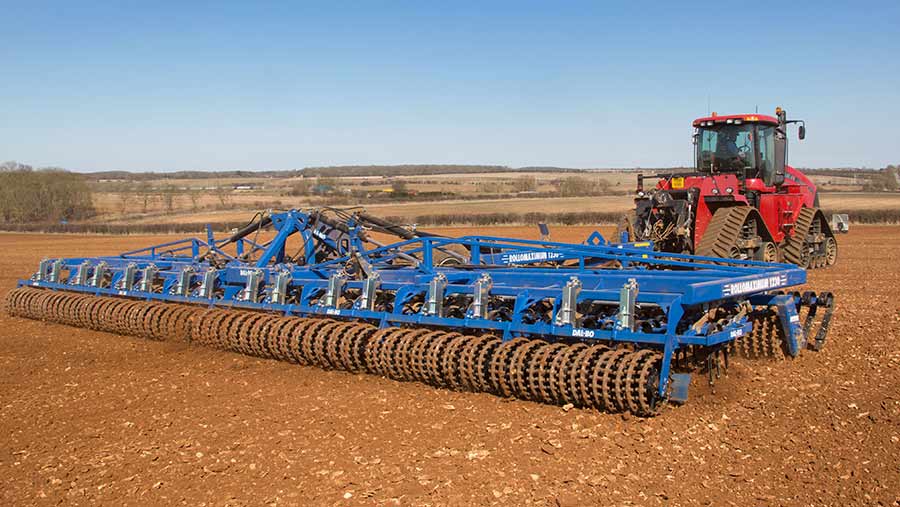 Collaborating with a neighbour to share the two biggest overheads, labour and machinery, could be one way to head off the increased cost pressures experienced since the Brexit vote.

The weaker sterling has already pushed up many input prices, while uncertainty about Brexit means margins could get tighter still.

According to Bradley Hurn, agri-business consultant at Brown & Co, the only reason commodity prices in the UK are above last year is due to the Brexit vote weakening the value of sterling.

Outside of this cushioning effect, global stocks are oversupplied with plenty of cheaper alternatives to UK cereals. Should the pound firm, prices could plummet.

Therefore, now is a good time to examine costs of production.

“If we had not had the Brexit vote, then conceivably we could have seen wheat prices below £100/t,” says Mr Hurn.

There has also been considerable variable cost inflation over the past five years, coupled with an increasing blackgrass burden hiking up herbicide costs.

With pressures on all sides and sizeable changes to subsidies likely to be around the corner, Mr Hurn advises farmers to start making changes to businesses with a mind to survive.

Labour and machinery are often the biggest costs to farmers and can be key areas in which to make significant savings.

However, they can also be hard topics to address; particularly labour, which can be an emotional cost to cut, he says.

“Making an employee redundant is not nice, but might be something that has to be done.”

Identifying where to cut back can prove difficult, so evaluating the current farming system is the place to start. Benchmarking can highlight areas to focus on, but it’s important to compare like-for-like when doing so.

“Repairs are often an unavoidable expense, but could be minimised by altering cultivation techniques, which can sometimes cause overwear and excessive fuel use,” explains Mr Hurn.

If cultivation can be changed to take less time and man-power while achieving the same results, it can reduce costs, he adds.

“There is not much that can be done about variable costs and it is still necessary to strive for the best yield and quality.”

However, cutting costs too much can be detrimental to a business, so instead farmers could consider collaborating to share labour and machinery.

There are numerous benefits to collaboration such as generating economies of scale and improving efficiencies, as well as creating opportunities for expansion, says Mr Hurn.

Brown & Co has developed software to help identify the costs and considerations farmers should take into account when addressing collaboration as a cost-cutting tactic.

“To start with, farmers need to have a willing neighbour with the same objectives and the right attitude,” says Mr Hurn.

The decision cannot be half-hearted, as it will result in a seismic shift to both businesses and how they are run.

When collaborating, all parties will have to be honest and open throughout the whole process.

They need to define how much machinery and man-power is required, as well what type of system will be operated, such as cultivation and drilling techniques and when contractors will be needed, he explains.

“From our initial experience, most businesses overstate the necessary labour force by at least one person,” says Mr Hurn. Therefore, it might be a case of hiring in casual labour during peak times.

Farmers do not need the cost of paying for someone when they are not fully using them, so this is where substantial cash savings can be made.

This is both in terms of absolute labour cost and the reduction in machinery you need to acquire and maintain if you have fewer employees.

Costs of each crop

The next step is to break down the costs per crop, looking at overall costs, depreciation, labour, interest, insurance, repairs and fuel, as these will all be coming out of the joint venture.

These should be benchmarked to a point beforehand and, once operational, each farmer will pay into the venture according to the work done.

“Sometimes it might be better to hire tractors when they are needed or to get contractors to do certain work – so it is worth establishing this beforehand,” says Mr Hurn.

A formal agreement is then usually drawn up between the parties, with a solicitor and accountant to get the legal and tax framework right.

“Setting up a separate company together is the most transparent way to go about it,” advises Mr Hurn.

Here the farmers can decide and formalise what input each will have, as well as the objectives of the individual and the land provider.

“Whether one wants to be more involved than the other, or if they want to step back, this can all be set out honestly,” he adds. “It is taking two farms and managing them as a whole, so the farmers need to be in it together.

It is also worth keeping in mind that sometimes yours might be the last field drilled and that you are relinquishing some of your control, but it is important to recognise the other benefits, explains Mr Hurn.

“Collaboration is not something to enter lightly, as often the route back from these kind of changes is very difficult.”

Letting go of some control and being confident to move forward can help farmers realise a real cost benefit to their businesses, he adds.

“With Article 50 being triggered in March 2017, this leaves two harvests to get businesses into a stable position before entering a new trading environment.”

How collaboration could save money – a worked example

Two businesses are setting up a machinery and labour-sharing venture together and are well aware of the cost savings collaboration will yield.

With five enterprises between them, the two farmers are going to join forces under a separate business with the sole purpose of sharing all machinery and labour between them.

Brown and Co’s Bradley Hurn says they may have already been sharing machinery to some extent, but are now in the process of formally committing to a more structured approach to cost savings.

Covering 1,000ha between them, they currently have four full-time employees and two part-time, but will be reducing this to one full-time and three part-time, with one farm manager overseeing all enterprises.

They have reviewed their cultivation techniques and analysed areas where savings can be made, using the Brown & Co calculator, while being careful not to jeopardise the existing farm performances. They are also reducing the number of tractors from five to three.