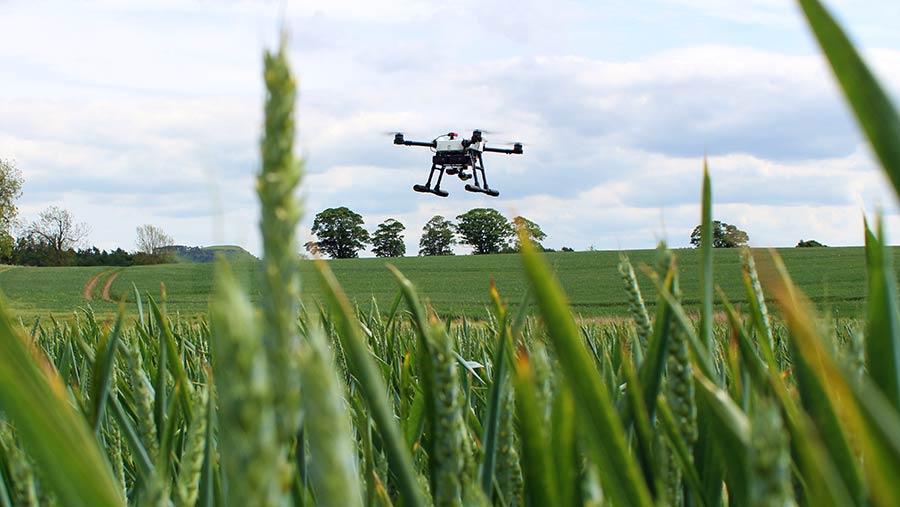 Farmers are forever being told that in the not-so-distant future drones will become a common crop monitoring tool, but what good is this technology if it cannot withstand the unique and often unpredictable traits of the British climate?

Most off-the-shelf unmanned aerial vehicles (UAVs) that are currently available will only manage to move about in gusts of wind up to about 20mph and if it’s raining they won’t be moving at all.

In short, these complex and expensive mechanical mosquitos need to toughen up before most UK growers will give them a chance to prove their worth.

This is where the Storm Agri Pro comes in, a newly developed quadcopter UAV launched earlier this year, aimed squarely at agronomists and farm businesses wanting to get maximum airtime with this powerful technology – whatever the weather.

Four years ago Jack Wrangham started Drone AG on the family mixed farm near Alnwick, Northumberland, and his brother Hugh has since come on-board after a stint testing high-tech sports cars made by McLaren.

All the electrical components are sealed in a unit at the heart of the machine, making it rain-tolerant and it is fitted with dust filters to keep the usual farm micro-grime from infecting its brain.

“The idea behind it is that you can have the system in the air in less than ideal conditions,” explains Hugh.

“Your average drone used on farm can’t handle changeable conditions, so if you were mapping a field and saw a band of rain moving in you’d have to stop the scan and land immediately.

“With this system you would be able to finish the job because it is built to withstand and work in such conditions.”

While it can tolerate a rain shower or two, flying in a full-bore storm is not recommended. 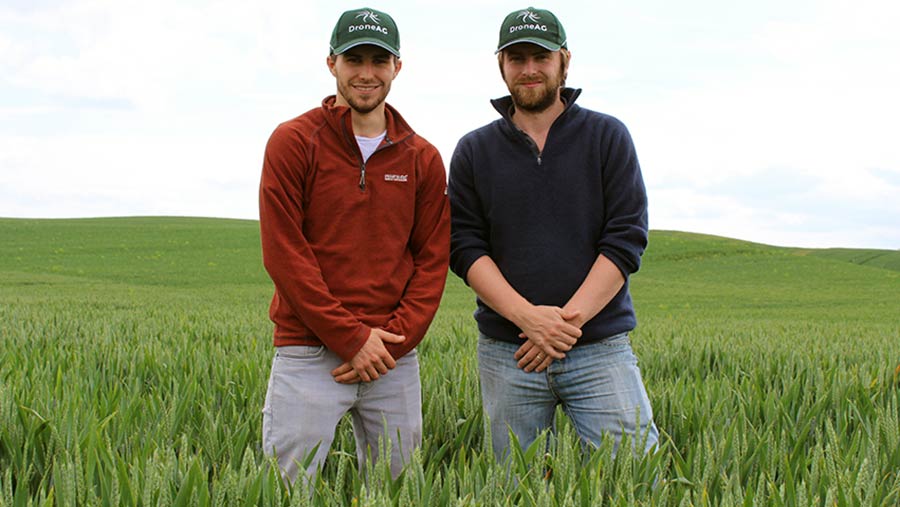 While it looks like a hefty piece of kit, the Storm Agri Pro only weighs 5kg thanks to its feather-light yet super-strong carbon fibre skeleton.

Powerful rotors placed at each of the four corners are beefy enough to maintain stable flight in gusts up to 30mph.

“In Northumberland we only have about 25 days a year on average when conditions are good enough to use a more conventional off-the-shelf UAV,” says Jack. “But this more robust model means we could actually use it about 120 days of the year.”

Dual batteries give this drone enough juice for up to 30 minutes of flight time, while dual GPS receivers and redundant flight control means that if any of the three on-board flight controllers were to fail, the system would continue to fly rather than hitting the deck in wallet-crippling style.

It also comes equipped with a top of the range multispectral sensor, developed specifically for crop and vegetation analysis, spotting potential problems in need of attention or treatment. 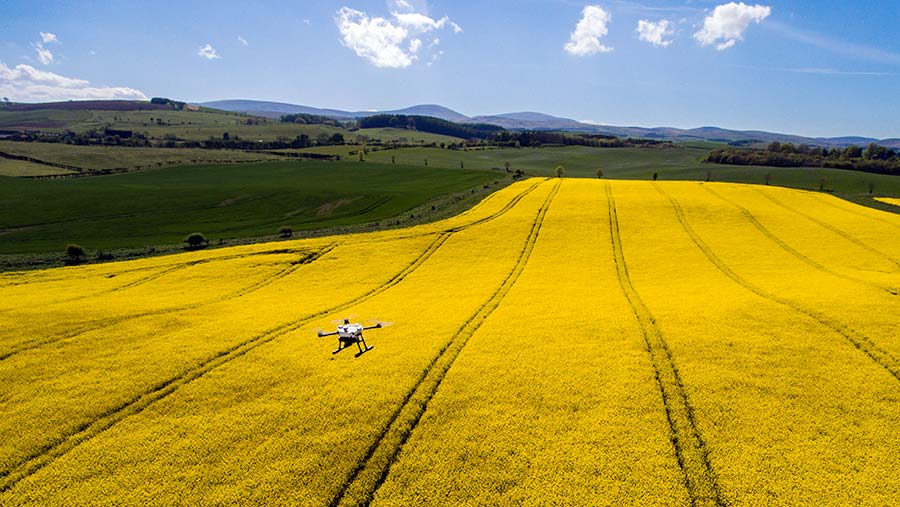 Even the most sophisticated drone is of very limited use without the right software to turn the data it harvests into meaningful information for farmers and agronomists to actually use.

Hugh explains that while the data collected by drones has shown to be extremely useful in assessing plant health and identifying weed growth, they have experienced issues when trying to convert the raw data into usable on-farm information.

So, to work with the new hardware, data processing will be handled by Drone AG’s software partner, South African-based company Aerobotics.

All the information will be run through the cloud-based software, AeroView, which is already used on farms in South Africa and Australia.

The Wrangham brothers are confident that the package will rapidly bring big advantages to farmers and agronomists. 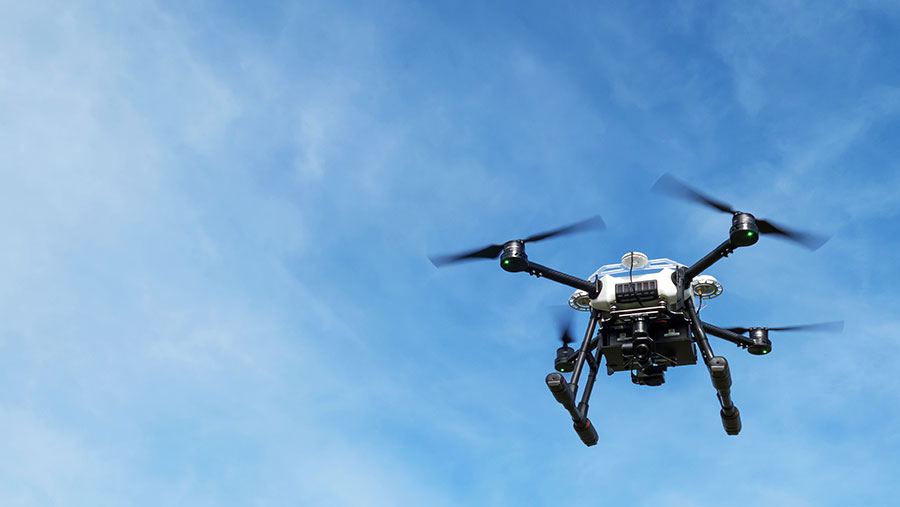 “We believe the combination of a UAV built for agriculture, alongside a powerful, user-friendly farm management tool and a nationwide support service, will open the doors to numerous high-precision farming techniques,” says Hugh.

“AeroView provides an intuitive and easy-to-use platform with groundbreaking analytics, which simplifies the process and gives our clients the information they need to make better decisions on the ground.”

The great thing about this software being cloud-based is that farmers won’t need to invest in a new computer to run this system because all the data is uploaded to AeroView. 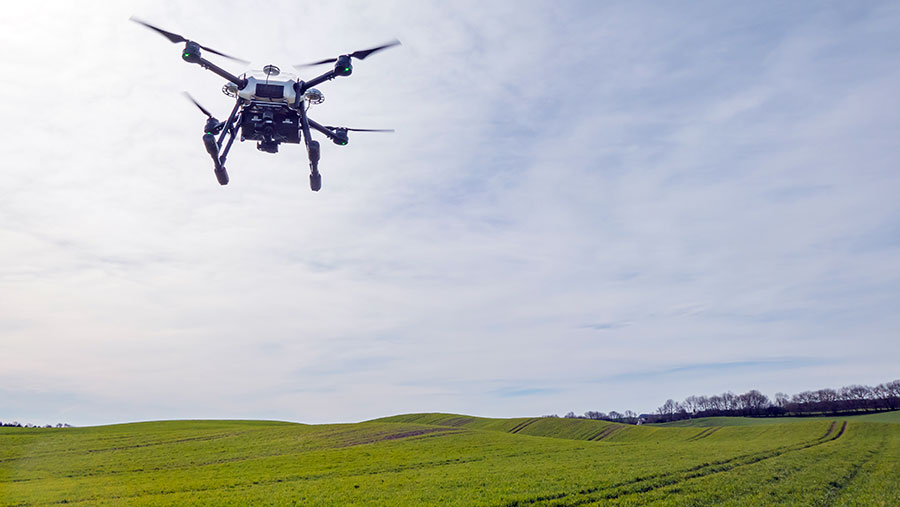 However, internet speed will be the main factor in deciding how quickly the software churns out results, with the process typically taking about 24 hours using the ultra-slow web connection at the Wrangham’s farm.

Usually the computer will be left to do the work overnight, adds Hugh.

The main reason why it takes such a long time to upload is the fact that drones capture an incredible amount of detailed information, so there’s a lot of data to upload.

“We are pushing to reduce those times and even eliminate the need to upload raw data,” says Hugh.

Image processing is done in-camera, meaning processing times of only a few minutes after landing with a mid-range laptop and no need for an internet connection.

See also: Drones can have a key role in predicting potato yields

Ongoing support with the cloud-based AeroView data processing, analytics and exporting to other precision farm equipment for variable rate applications costs £150 per month. 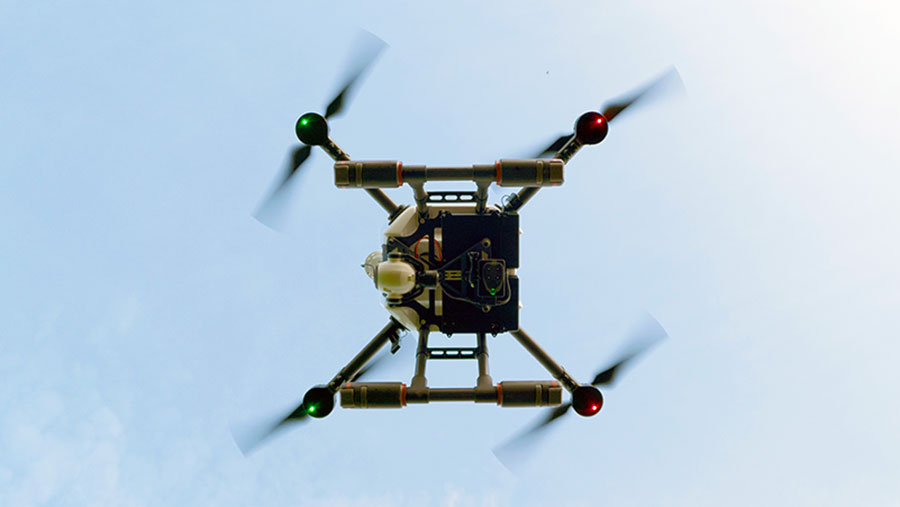 This new sensor is also higher resolution than those that have come before it, giving a resolution of 5cm per pixel at an altitude of 120m. By contrast, more commonly used satellite images have an accuracy of 3m per pixel on average.

Optional RTK technology can also be added to the drone to bring overall position accuracy down from metres to less than 5cm.

“With RTK setup, you can draw field boundaries and mark obstacles such as telegraph poles more accurately than you can with satellite data,” explains Hugh.

“You could map the entire farm once with great detail, put this information into your farm management software, create all your tramlines and use this to run the whole precision farming system.”

Spot spraying patches of a crop infested with weeds is also possible, but there is little point in having field maps accurate to a few centimetres if growers cannot use their sprayers to target these areas with enough precision.

This potential is now being realised however, as sprayer technology is catching up with the level of detail offered by UAVs.

The development of individual nozzle control on sprayers means that, when opting to spray off small patches of blackgrass-infested crops, growers can be sure they are not applying chemicals to a larger area than is necessary.

There is no denying that this approach is far more sophisticated than the sprayer operator manually turning boom sections on and off to hit weed-smothered areas as he drives along.