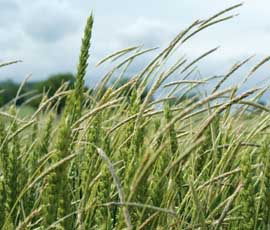 Results from BASF-funded research shows a mean dormancy figure of 23%, reveals Sarah Cook of ADAS Boxworth, meaning that growers are likely to see a more protracted germination period than they have for the last two years.

“Put another way, only 23% of the blackgrass will readily germinate,” she explains. “This means that blackgrass will be emerging slowly over a longer period of time, even where there’s good seed-bed moisture.”

The results are based on 52 geographical samples, continues Mrs Cook. “There were some samples which showed lower dormancy levels, reflecting the importance of local conditions, but there were no obvious regional differences.”

Weather conditions during maturation influence the dormancy level of blackgrass, she explains. “The period between mid-June and early July is critical. In 2011, these couple of weeks were a little cooler than the average.”

Before drilling, growers should spray off any blackgrass that has emerged. “It will be less than in a low dormancy year. And as most farmers achieved high levels of control this year, try not to plough up more seeds than you bury.”

For some, minimum tillage may be more appropriate than ploughing this autumn, she believes. “But that means cultivating to a depth of just 5cm. However, if you’re dealing with very high weed numbers, ploughing is still the best approach.”

At drilling, aim for a competitive crop, urges Mrs Cook. “Don’t be tempted to reduce seed rates. Seed-bed preparation will also be important – you want to avoid cloddy seed-beds so that you maximise herbicide performance.”

She adds that pre-emergence herbicide treatments must contain a residual component to cover the protracted period of weed emergence. “The post-emergence spray will also benefit from a residual element, again to deal with later emergers. Fortunately, these plants tend to be less competitive, which is why a well-established, competitive crop can help.”

Contrary to some expectations, high dormancy does not lead to a spring flush of blackgrass, she reports. “It tends to wait until the following year. If the seed-bed isn’t moved, the blackgrass won’t emerge.”

According to Phil Brown of BASF, pre-emergence herbicide Crystal (flufenacet+pendimethalin) is ideally suited to manage this autumn’s extended weed germination. “When the weeds are emerging over a longer period of time, you are more reliant on the residual component working for the same duration.

“Pendimethalin, which works by both root and shoot uptake, is longer lasting in the soil, so is the preferred partner to flufenacet in these conditions. Even 100 days after application, there is still 64% of the active ingredient remaining in the soil.”

Dow AgroSciences is funding an ADAS grassweed emergence monitoring scheme this season, to help growers with the timing of post-emergence sprays.

Following on from last year’s pilot scheme, the emergence of three key grass weed species will be monitored by ADAS on a weekly basis at five sites across England.

Two September and October sowing dates will be used, with the weed plants being counted from the start of emergence to mid-December, and again from mid-February to early April.

“We will be communicating weekly to agronomists with the emergence figures,” says Dow’s Stuart Jackson. “The counts will include blackgrass, Italian ryegrass and sterile brome, with the information coming from sites in Humberside, Cambridgeshire, Worcestershire, Oxfordshire and Kent.