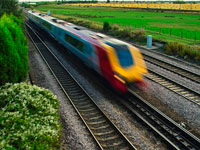 Plans to move the proposed high-speed rail link from London to Birmingham away from villages could see it cut through the National Agricultural Centre at Stoneleigh Park.

The Warwickshire village of Stoneleigh was granted a reprieve last week when the proposed route was moved away from homes, but it is feared the National Agricultural Centre may now stand in the path of the £30bn high-speed track.

The line was re-drawn after talks between MPs and the Department for Transport, which is keen to avoid a lengthy battle with pressure groups.

Should the move go ahead, the revised route would cause considerable disruption during the building phase and could reduce the area available for shows and events.


The NFU, Agriculture and Horticulture Development Board, Lantra, Farmers Weekly and FWAG all have offices at the showground and would suffer considerable disruption.

Steve Lloyd, finance and commercial director for the Royal Agricultural Society of England who own the site, said: “We’re waiting to find out more details and at the moment we only know what’s in the public domain. These are just proposals at the moment. The map is not at all precise and until we receive more detail we can’t say any more.”