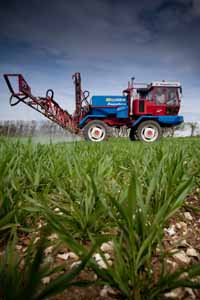 Wheat crops yielding more than 9.5t/ha are most likely to give a clear positive return on investment from a T2 application of new Bayer SDHI fungicide Aviator 235 Xpro.

Analysis of 40 trials from three contrasting seasons from 2008 to 2010, by Bayer’s James Taylor-Alford found that sites with the highest yields showed the greatest additional response to Aviator Xpro over the current standard T2 of three-quarter dose triazole plus 80g/ha of strobilurin.

Using Aviator Xpro at T2 at sites with a yield potential of 8-9.5t/ha saw a 2% or 0.18t/ha increase, while low-yielding trials with less than 8t/ha yields only gave 1% or 0.08t/ha response to Aviator Xpro.

“The best response is in high-yield potential crops where you see the benefit of the Aviator Xpro technology.”

Perhaps surprisingly, the analysis suggested that disease pressure wasn’t necessarily the major factor in the increased response, with septoria levels in the untreated plots being relatively similar across low, medium and high-yielding sites.

“There appears to be something else other than just septoria control going on, probably akin, but not exactly the same as, the strobilurin fungicide physiological responses.”

That said, it made sense to use the best products for disease control when pressure was high, he stressed.

Less surprisingly, high-yielding crops also produced the largest return on investment from switching to Aviator Xpro, which will cost £6-8/ha more than current standards, he said. “The higher the wheat price the greater the margin delivered by Aviator Xpro.”

For example, a farm switching to Aviator Xpro on 100ha of high-yielding wheat sold at £150/t could see an additional £6000 income.

“But on low-yield potential crops there are more questions about switching,” he admitted.

To achieve the yield benefits on high potential sites it was critical to use at least 1.0 litres/ha of Aviator Xpro, he stressed. “There is a strong dose response with Aviator Xpro, and in trials we’ve found that if you drop the dose to 60% or 0.75 litres/ha you’re not really doing anything you can’t do with existing chemistry.”

Region and variety should be non-factors in any decision to switch. Six variety trials in 2009 and 2010 switched Aviator Xpro for Firefly at T2, and showed a fairly consistent yield response for the new chemistry, Mr Taylor-Alford said.

The first generation of the group, which inhibits an energy pathway in the fungus driven by the succinate dehydrogenase enzyme, started in the 1970s with carboxin and was more recently re-introduced with the discovery of boscalid by BASF, sold as Tracker in cereals.

The new generation has greater persistence and activity against key diseases in wheat and barley, offers some physiological properties similar to those seen with strobilurins and, of course, greater yields.

Aviator 235 Xpro is a specific formulation designed for the UK, containing a higher dose of prothioconazole than a German formulation, which will also be launched this year, and will be known as Aviator Xpro.

Note: Any mention of Aviator Xpro in Farmers Weekly, Crops or on www.fwi.co.uk refers to the UK formulation unless indicated otherwise.

• Yield increases of around 0.5t/ha over standards