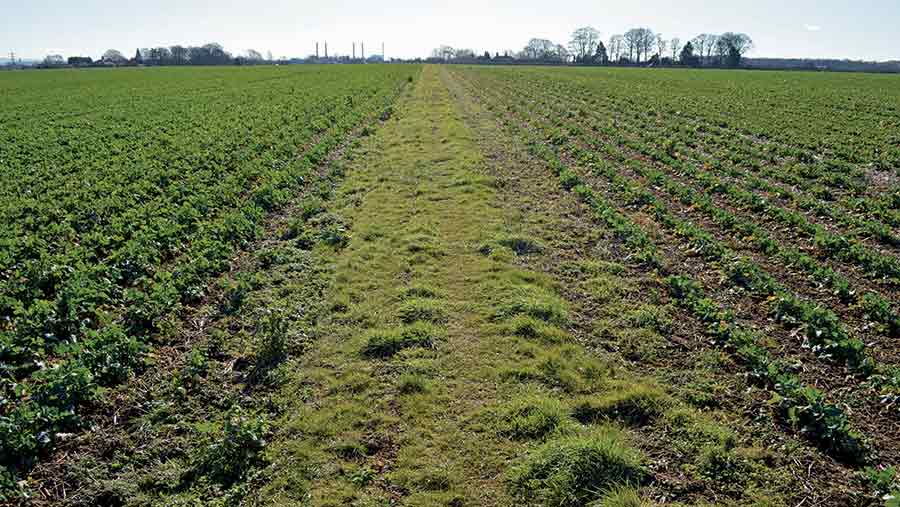 Comparison of the two trial plots

David Richardson is optimistic for oilseed rape yields of 5t/ha after seeing healthy crops come out of the winter as he trials a high-input system alongside his own farm regime.

The only difference between the two systems so far in monetary terms is a higher rate of autumn fungicide for the high-input system and also higher seed costs.

“It’s a very forward year, and we would expect a crop of 5t/ha, as our average last year was just shy of 4.5t/ha,” he tells Farmers Weekly.

This season there has been more light leaf spot and phoma disease in the crops due the mild and wet autumn and winter, but Mr Richardson still sees good potential yields.

Recent frosts have checked the crop, which was racing away by Christmas, but it still looked very forward as spring work was getting started.

Mr Richardson is using a 29ha field with a light limestone soil to compare a high-input system using a hybrid variety and full fungicide programme devised by Bayer and his own typical farm practice using a conventional variety.

The hybrid used is Bayer variety Harper, which looked slightly further forward in early spring – with green buds visible as early as February – compared with the conventional variety Barbados from KWS.

Mr Richardson is using his own farm practice for seed, fertiliser and herbicides across both trials, with Bayer devising its own fungicide/insecticide strategy.

Since Farmers Weekly‘s first visit in late September to the predominantly arable 900ha Lodge Farm near Appleby, four miles east of Scunthorpe and close to the River Humber, an  autumn fungicide was applied in mid-November and then AstroKerb herbicide in December.

The initial plan for the high-input system was to have two autumn fungicides and one insecticide, but the strong growth of the crop only necessitated one fungicide.

“The disease in more prevalent in this area. Variety choice can be key, but certainly light leaf spot is more and more of an issue,” he says.

Barbados scores a 7 for light leaf spot resistance on a 1-9 scale, while Harper is a 6. For phoma, Harper scores slightly higher at 8 compared with Barbados at 7.

The insecticide Hallmark was used to control cabbage stem flea beetle in the trial and across the 135ha of oilseed rape grown on the farm this season. 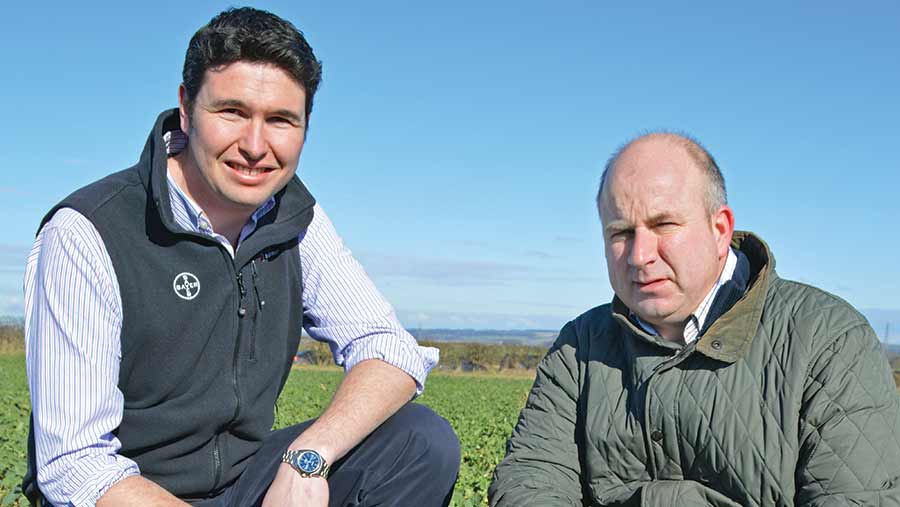 For the spring, Mr Garnett plans an early fungicide of Corinth (prothioconazole + tebuconazole) to keep on top of the light leaf spot, while the second azole tebuconazole has some plant growth regulation properties.

Mr Richardson is still to decide whether he will go with a fungicide or fungicide plus a plant growth regulator in the spring.

The herbicide AstroKerb, which was applied in December, did a good job on broad-leaved weeds, especially groundsel, cranesbill and shepherds purse.