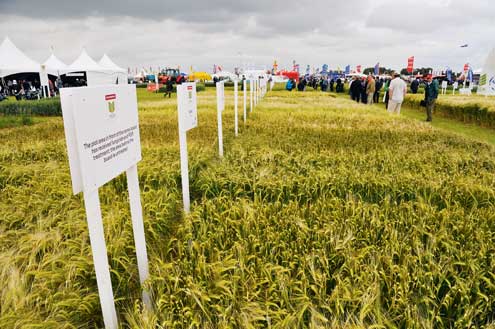 Limagrain is growing three high-yielding Group 4 wheats up for recommendation. Coronation is a first or second wheat with a yield similar to Oakley. Myriad is a soft Group 4 and Revelation, another soft, scores 9 for yellow and brown rust resistance.

New wheats from KWS include KWS Kielder and KWS Croft, a soft wheat with Oakley-like yields.

Pioneer is showing three candidates, all available this autumn. PT211 and PT206 are normal-height high-output hybrids, and PX104 is a Maximus semi-dwarf hybrid with a yield of 107%.

Dekalb is displaying candidates DK Excellium and DK ExStorm as well as two new varieties being launched at the event – DK Extrovert and DK Explicit.

Semi-dwarf Troy, from DSV, is up for recommendation in November. Fellow DSV candidate Marathon, is currently the highest yielding variety in trials for the East and West region.

A brace of KWS two-row barleys, KWS Discovery and KWS Glacier, up for UK recommendation this year, look set to lift barley yields to new levels.

Senova’s Talisman is the highest yielding winter barley candidate variety, with malting potential. Magellan, a potential malting spring barley, has the highest specific weight of all candidates. SY Venture is the new malting barley from Syngenta, which has BYMV resistance.

The Oxford Farming Conference at Cereals

Four sessions will be run over the two days, with 20 panellists debating a range of topics.

The first session will consider whether farming should be prioritising food production over the environment. Panellists include NFU president Peter Kendall, Martin Harper, conservation director at RSPB and Richard Butler, chairman of the Voluntary Initiative.

DEFRA minister Jim Paice will take part in the afternoon session which is considers the need to increase yields to feed the world. Together with the other panellists, he will address whether there is the political, scientific and economic means to significantly increase UK crop output.

The second day kicks off looking at whether farming is attracting new farmers for the future and how to overcome any barriers to entry. Panellists will include CLA president Harry Cotterill, contractor Adam Metcalfe and David Llewellyn of Harper Adams University College.

To help growers tap in to this market, IEC is launching a 10-year RPI-linked rental or contract farming agreement for difficult-to-manage areas of UK land at the event. IEC will establish and use the crop for 10 years before returning it to the farmer who still has 10 years or more of profitable energy growing.

Anaerobic digester specialist BioG UK will be on hand to discuss its novel joint venture package to help farmers who are thinking about installing a plant, but are put off by the cost.

Windcrop will be demonstrating a full-size, working wind turbine to dispel fears about the size and noise of the system. The company installs and maintains turbines and receives the feed-in tariff while the landowner gets free electricity.

Lemken is showing its next generation Sirius 8 and 10 series mounted sprayers. The Sirius 10 is the first Lemken sprayer with individual nozzle switching.

Horsch will bring three new sprayers to the UK, the self-propelled PT 270 and trailed GS 8000 and GS 6000. The high-spec sprayers can operate precisely at speed using Horsch Leeb’s boom control.

Cereals is the first outing for the Dammann DT500. The self-propelled machine, based on a Mercedes-Benz Unimog, includes 4-wheel steering, a 4,500-litre tank, a 60-litre induction hopper, and a three-section folding 36m boom.

Micron’s Varidome S3, a shielded inter-row CDA sprayer for weed control in OSR makes its Cereals debut. It can spray inter-row widths from 170mm to 700mm.

Kubota UK will show its new M110GX and M135GX machines while McCormick distributor AgriArgo UK is unveiling a five-model range of six-cylinder tractors.

John Deere’s new 6R Series small and medium sized tractors, rated from 105 to 150hp, will be on show. New Holland’s recently introduced T6 tractor – models range from 119 to 175hp – will feature alongside its bigger brother, the T7.

Weaving has developed a smaller zero-till drill for small to medium-sized farms. The 1.5t hopper version is available in 3m or 4m versions and only needs 100hp to pull it. It can plant all seed sizes from oilseed rape to beans.

By contrast, Amazone’s new 15m tine coulter Condor 15001 direct drill has a hopper capacity of 8,000 litres and will require at least 270 hp up front. Amazone is also launching the Citan 6000, a 6m solo drill to work on cultivated land offering high-output drilling.

Opico is unveiling the Puma, a new folding rotary cultivator from Maschio for 120-200hp tractors at 3.2m, 3.7m and 4.2m with a variety of tine and roller options.