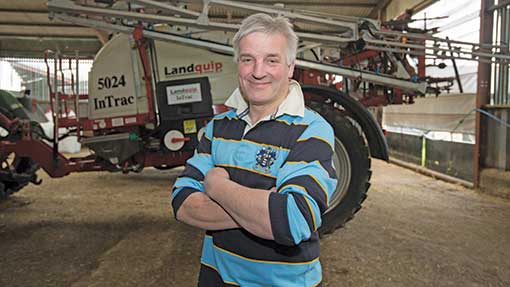 Fine-tuning, rather than radical change, has been the main focus for Cereals 2014 host farmer Robert Law since he last hosted the event at Chrishall Grange on the Cambs/Herts border in 2010.

Crop areas have been adjusted slightly – with only peas eliminated from the rotation entirely – while extensive conservation work has continued across the 1,500ha farmed from its Royston base. Despite political and financial uncertainty surrounding the future of environmental schemes, all of the land has been entered into new higher-level stewardship (HLS) and entry-level stewardship (ELS) schemes.

Robert Law: At a glance

Conservation Grade wheat, oats, rye and barley are grown on contract for local markets which, together with the production of various seed crops and sugar beet, allows Mr Law to add value wherever possible and reflect the need to maximise returns from the light, chalky soils that dominate the area.

“Every year is a drought year here,” he points out. “While the soils are free-draining and easy to work, they don’t hold moisture for long and dry out very quickly in the summer. We are under constant threat of drought.”

His commitment to running a mixed farming system is clear; a 2,500-ewe flock is run on 240ha of permanent grassland, supplemented by 240ha of catch crop stubble turnips and some rotational grass and the reintroduction of cattle is being given serious consideration.

“The foot-and-mouth crisis in 2001 ended cattle rearing here,” he recalls. “But the market is there, with some of the best prices ever, and beef production is falling. The economics look encouraging.”

A former Farmers Weekly Farmer of the Year and a regular Farmer Focus writer, Mr Law describes the past four years as fairly settled. “Having been through a period of rapid expansion in the years before that, we’ve now consolidated the system.”

Since he last opened his gates to thousands of visitors to Chrishall Grange, he has taken the decision to stop growing winter wheat on 160ha of sandier land that runs alongside the A505 and is now using it to produce barley, oats, rye, sugar beet and catch crop stubble turnips.

Unlike 2010, a park-and-ride facility won’t be on offer to visitors to Cereals on 11-12 June at Chrishall Grange, near Duxford, Cambridgeshire. Instead, a pedestrian bridge over the A505 will be used to access extra car park areas and keep the main A505 flowing.

This year’s event will be held on the biggest area ever for Cereals, with everything being contained on a single 64ha site. More than 27,000 visitors are expected to attend.

All of the barley, oats and rye are contracted to Jordans/Ryvita, as is 60% of his winter wheat, with some contracted to Allinson’s local mill. All of the cereals are grown to Conservation Grade standards.

Winter barley, all of which is the variety Carat, is grown for pearling. Consistent results, along with yields up to 9.5t/ha, have persuaded him to stick with the variety for the time being. “It’s a very early variety, which helps on these soils. It also produces a bold grain, with low screenings and it stands well.”

However, rye has been the big surprise, he admits. “We originally grew it on some reclaimed gravel extracted land and managed to get about 5t/ha. We are now growing it on the lighter, sandy soils at Chrishall Grange using hybrid varieties, with yields of 9t/ha being achieved.”

Having spent the past eighteen months renewing classic countryside stewardship schemes with HLS and ELS elements on his farm, Mr Law is now wondering about forthcoming greening payments.

“I don’t know yet how many of the options we have in HLS/ELS will count towards greening. I’ve always been in the habit of taking what’s there while it’s available.”

The three-crop rule is no threat for most of his farming operation, with the exception of one 50ha contract farming agreement. “Because of the size of that unit, I block-crop it for simplicity. That won’t be possible any longer.”

A new barn is under construction at Thrift Farm, with a dual livestock housing and grain storage purpose. A significant woodland project is also under way on some new land, while a classroom is run for school groups.

Concerns about succession and manpower in farming are the same as they were in 2010, but Mr Law has now added the role of Europe to his list of threats for the future.

That yield level has been reached when rye is grown as a third cereal, he says. “It’s relatively cheap to grow and rabbits steer clear of it.”

Buying hybrid seed is an additional cost, he admits, but low seed rates help to offset the extra expense. “It’s about £1,000/t for the seed, but we drill it at 90kg/ha.”

Oats have proved to be a useful break crop for the farm and also feature on the Nottinghamshire farm he manages. “A total of 500ha is grown across all farms.”

The land’s take-all problem is minimised by growing oats, explains Mr Law, as the crop isn’t affected and provides a take-all break. He grows milling oats on his Cambridgeshire/Hertfordshire farms, while on the Nottinghamshire unit, where achieving milling quality can be difficult, seed oats are produced.

“All of our oats are the winter variety Mascani, which has taken over from Gerald,” he says. “Mascani consistently produces the grain quality that’s required by the millers and our yields average about 7.5t/ha.”

Fortunately, wild oats and blackgrass aren’t a great problem on either farm, as their control in oats can be challenging. “We have a wide rotation and plenty of spring cropping, so grassweeds haven’t been able to make the headway they have on heavier land in the area.”

Other advantages of oats include lower input costs, with both nitrogen and fungicide requirements being considerably less than wheat. “And of course there’s no need to mix lots of active ingredients together simply to get grassweed control.”

The oat harvest follows barley and is finished in time for the wheat to start. “We do put quite a bit into the oat crop, as the Conservation Grade protocol requires us to include managed wildlife habitats. But they are holding their own.”

Otherwise, 130ha of sugar beet, which is moved around the farms, is grown for the Bury St Edmunds factory. Lifting takes place in three hits, so that winter wheat can follow the earlier December dates and spring barley the later dates in February.

The remaining 130ha of arable land produces seed crops of fodder rape, stubble turnips and mustard. “The mustard has replaced peas, which were too inconsistent and too much trouble, as well as being very attractive to pigeons.”

The entire wheat area of 380ha is in soft varieties, mainly Group 3s, to meet the needs of three local mills – all situated within 35 miles of the farm.

Varieties are chosen for their consistency, reliability and quality, rather than their paper performance, with Mr Law remaining loyal to those that have met these criteria and been acceptable at the mill.

For this reason, he is still growing Consort and Wizard, although he accepts that they might be nearing the end of their time. “They have given us the quality, every year, and been weatherproof, holding on to their Hagbergs and specific weights.

Another stalwart has been Istabraq, he says. “We dropped Invicta and Tuxedo last year, which had poor years, while Scout and Viscount didn’t suit us either.”

In the ground this year are Zulu and Horatio, with Crusoe being grown for seed. He is also interested in Monterey, which is looking good on neighbouring farms and appears to have the grain quality the end users require.

Last year’s wheat yields rose to 10.1t/ha, he says. “That was up on the previous three years, when we achieved 8.5t/ha.”