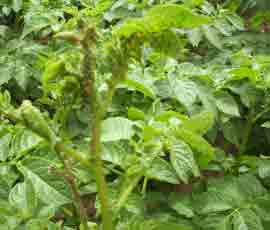 The recent hot spell has seen a sudden increase in aphid numbers building in potato crops around the country, prompting warnings of a growing threat from yield-robbing viruses.

Potential yield losses may be up to 85%, warn experts, depending on variety and growing conditions.

“The increase in temperature has seen a sudden and significant increase in both winged and non-winged aphid species,” he reports.

The peach potato aphid (Myzus Persicae) remains the greatest threat for transmitting viruses in potatoes and other crops, such as potato leaf roll virus (PLRV) and potato virus Y (PVy)

Aphids are the major reason for crops failing seed certification, as seed crops in particular, need constant monitoring as infected tubers will not be accepted if infection is present.

“After the late planting and slow start to spring, many seed crops are still at early tuber initiation stage, when they are most susceptible to virus transmission by aphids,” comments Stephen Williams, Syngenta potato technical manager.

The advice to growers from Dr Sarup is to be vigilant. He suggests the use of neonicotinoids as the peach potato aphid currently has no resistance issues. However, he urges growers to consider applying when plants are not flowering, and when bees are not foraging, such as early morning and late in the evening.

To give an extra dimension to protection against aphids, he also suggests the use of a “resistance breaker” mix like a neonicotinoid to get the ingestion action of the active ingredient, together with the repellent type effects of a pyrethroid.

For more information, see the Potato Council’s online aphid monitoring tool for up to date information on aphid levels in your area.