Sugar beet yields could be slashed by up to 30% if a total ban on neonicotinoid seed treatments is implemented, experts believe, as forgotten diseases reappear in Britain’s fields.

Alan Dewar, independent pest specialist, believes “the writing is on the wall” for the three actives in question.

However, there is a European Commission proposal for a blanket ban on these and a vote is due on this in 2018.

And concerns about this have been compounded by a change in stance by the Defra secretary Michael Gove who has said he now supports a total ban.

In the background is growing public pressure fuelled by a stream of negative headlines in the national press, based on research reports.

For example, Dr Dewar points to last summer with the reporting of a large-scale European study co-ordinated by the Centre for Ecology and Hydrology, which showed a negative impact on bees in the UK and Hungary, although not in Germany.

Other recent research papers claim to have discovered neonicotinoid residues in up to 52% of honey samples collected from across the UK since the ban was implemented in 2013, and evidence of rivers “polluted” by these neonicotinoids, especially in the east of the UK.

“It’s a constant stream of bad news,” he says, adding that although residues are well below safety levels, these caveats never appear in the headlines and the ag-chem industry is losing the media battle.

So what impact will a total ban have on future pest control? A good place to start is by looking at what has happened in oilseed rape. 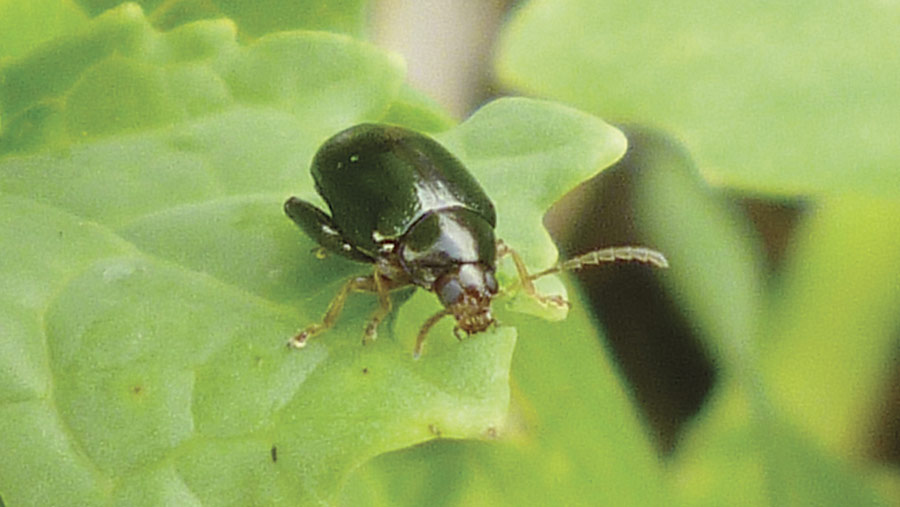 One obvious change in this crop is the pecking order of pests. Back in 2010, pollen beetles were the farmers’ top target, accounting for 34% of total OSR insecticide use.

But by 2016, cabbage stem flea beetle (CSFB) had become the most important pest in rapeseed, accounting for nearly 60% of foliar insecticide use.

Farmers are seeing extensive damage by CSFB adults during establishment in autumn, with further damage by larvae in the following spring.

Routine crop monitoring surveys carried out each autumn and spring by Fera confirm the explosion in CSFB numbers since the ban and they have remained higher.

Consequently, pyrethroid use in OSR has doubled and agronomists are seeing a spread of resistance to the chemical in CSFB from the hotspot areas in Essex, Cambridgeshire, West Suffolk, Hertfordshire and Bedfordshire.

“They [pyrethroids] were doing quite a good job until resistance came along,” he says.

The problem is no other available insecticides give any better control. Therefore, he believes CSFB is likely to be a serious problem for the foreseeable future.

It’s a better situation for aphids in OSR, as there are alternative insecticides that do work.

For example, Myzus persicae, the main vector of turnip yellows virus that can slash yields by up to 25%, can be controlled by pymetrozine (Plenum), thiacloprid (Biscaya) and acetamiprid (Insyst), including those that are resistant to pyrethroids.

However, these are more costly than pyrethroids, and only one application is permitted, so correct timing is vital to get effective control. 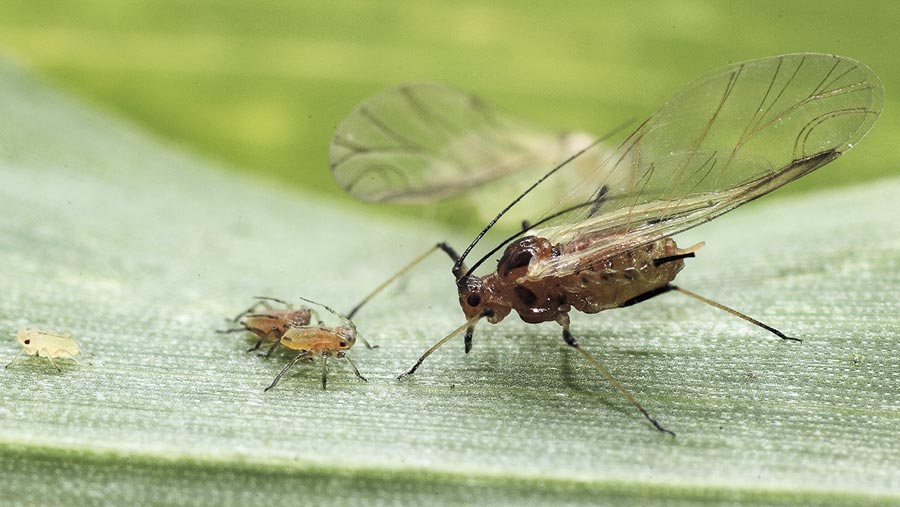 Moving to cereals, he says there are three pests that would be affected by the ban – grain aphids, bird-cherry aphids and gout fly, which are all autumn pests.

Aphids are by far the top target in cereals accounting for 93% of insecticide use in winter wheat and 97% in winter barley in 2016. The bird-cherry aphid is a key pest in both crops, spreading barley yellow dwarf virus (BYDV), but it is still well controlled by pyrethroids.

Grain aphids also carry BYDV, but there were reports of control failures in 2012 and 2016, which have been attributed to resistance to pyrethroids.

However BYDV is well controlled by neonicotinoid seed treatments, which have increased in usage in recent years. In 2015, 37% of winter wheat and 27% of winter barley was treated with the neonicotinoid, clothianidin, as Deter.

Dr Dewar believes a consequence of its loss will be a significant increase in pyrethroid use in cereals in autumn (as in OSR), as they are the only insecticides approved for that timing.

He predicts BYDV epidemics will become more frequent due to selection for resistance to pyrethroids, and the impact of global warming, which will allow uncontrolled aphids to fly later in the autumn, and survive milder winters.

The good news is there are other insecticides, such as Dow’s Isoclast, which offers a new mode of action and may come to the market this autumn, and Biscaya (thiacloprid), which may become available for autumn use. 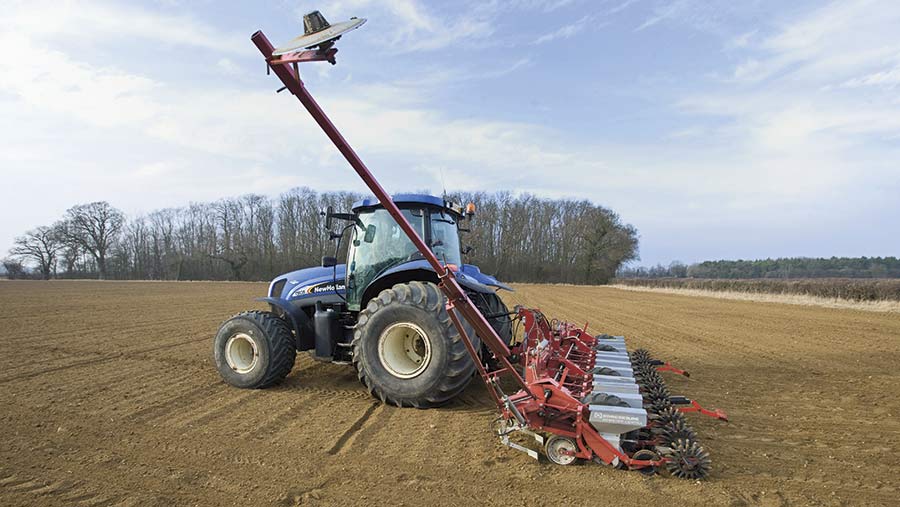 However, sugar beet is the most vulnerable crop with 97% of the area grown treated with the neonicotinoid seed treatments, Cruiser or Poncho Beta.

Back in the 1970s and 1980s, beet yellows was the most prevalent disease in sugar beet; the arrival of neonicotinoid seed treatments in the mid 1990’s largely saw it disappear.

“It was so well controlled that many believe it had gone for good ,” he says.

But Dr Dewar warns it has not gone away.

There have been recent cases of serious infection, for example in one trial in 2015 in East Cambridgeshire, and last year in a field of fodder beet in the West Midlands which had almost 100% infection.

Similarly in northern France in 2017, the ITB – the French sugar beet growers association – reported heavy (25%) infection with virus yellows in a crop where neonicotinoid seed treatments were not used, which resulted in a 36% yield reduction in sugar yield in infected patches. 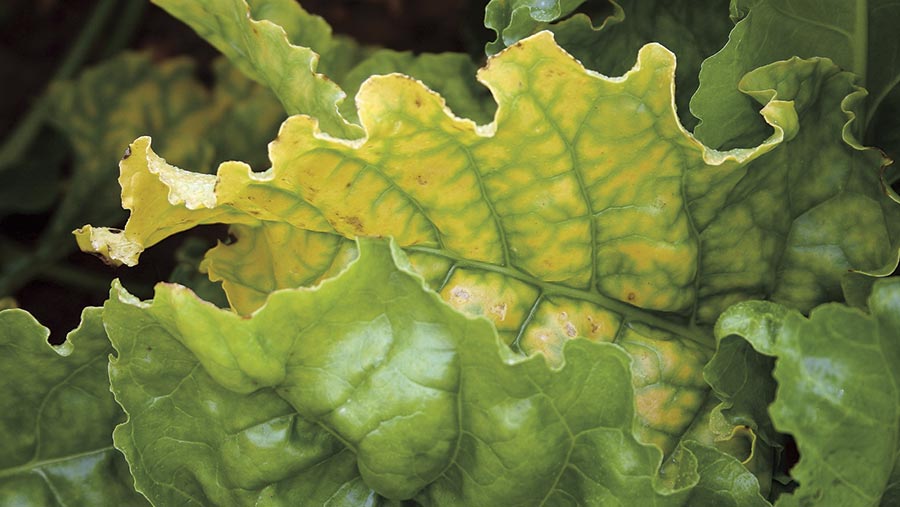 So where did this come from? The observations suggest there is still a reservoir of the disease and what is troubling is the speed of spread.

“The disease appeared at a high level in a matter of five months, not five years,” says Dr Dewar.

The problem is the peach potato aphid, the main virus yellows vector, is almost totally resistant to pyrethroids and pirimicarb (the latter is no longer approved in any case).

There are no other insecticide sprays approved for use in sugar beet, leaving growers totally exposed to the disease.

So a total neonicotinoid ban could lead to the rapid reintroduction of beet yellows, bringing substantial yield losses.

Looking ahead, new insecticides urgently need to be approved for use in sugar beet and their use will need to be coupled with the re-introduction of a virus yellows warning scheme.

This tool proved valuable before neonics were adopted, helping target insecticide use, he says.

In conclusion, a total ban will see a change in farmers’ pest priorities in cereals and sugar beet.

It will require a greater adoption of integrated pest management (IPM) approaches, including forecasting and monitoring services that used to be done before neonics were introduced.

Alan Dewar was speaking at the recent Association of Independent Crops Consultants (AICC) conference held near Towcester. The AICC has more 250 members representing 50% of the UK arable advice market.