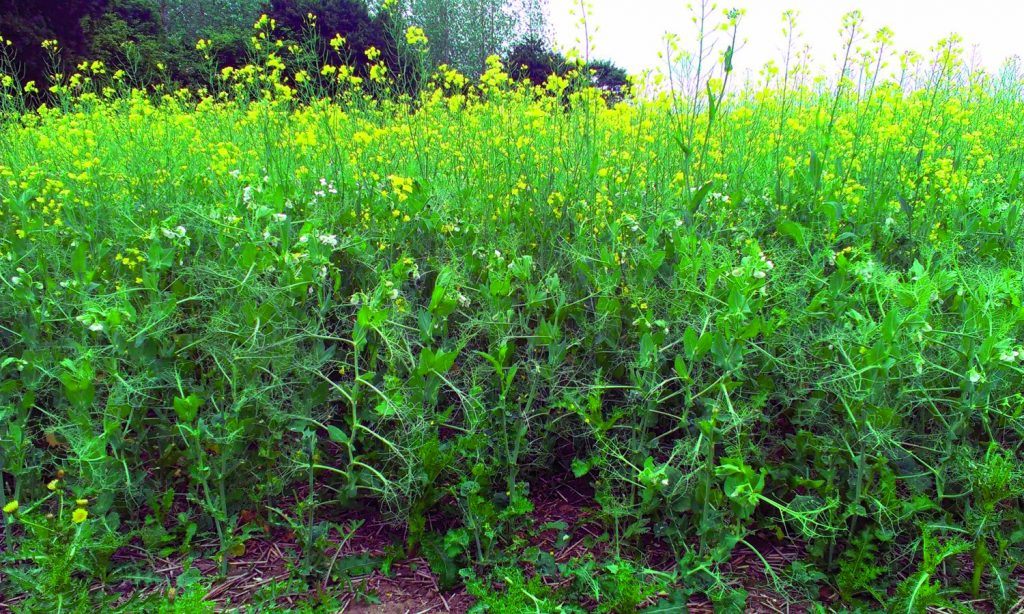 Growing more than one crop could play a valuable role on UK farms, through raising yields and slashing the need for inputs, and it may even help solve problems such as barley yellow dwarf virus, says Andrew Howard.

The 2015 Nuffield scholar and Kent farmer is convinced that many of the techniques used overseas are relevant and could be put to good use by UK growers.

See also: Get up to 1t/ha extra OSR yield with clover companion crop

Having travelled to farms across the world, visiting nine different countries, Mr Howard reveals that yield increases of up to 30% are possible where intercropping is being carried out successfully and genetic diversity is being exploited.

He adds that it has also helped to reduce weeds, pests and disease in many situations, replacing the need for high-input regimes and their associated expenditure.

However, despite the enormous potential, there is no blueprint for success, he stresses.

“There’s no one-size-fits-all solution. Every farm will lend itself to different cropping combinations. And individual sites may have particular constraints or issues that make them unsuitable.”

So what is intercropping? And how does it work in the soils and conditions found in the UK, which can be very different to those parts of the world where intercropping is an established practice?

“Intercropping is the growing of two or more crops in the same field at the same time, where one or more of them is taken to harvest,” explains Mr Howard.

“It’s a principle that was established 5,000 years ago, with plants chosen to complement each other above and below the ground, filling all the niches available.

“As time has passed, we’ve moved to farming systems based on monoculture rather than polyculture, many of which are now running into problems.”

The simplest form of intercropping is where four or more varieties of the same crop are grown together in the same field.

“It won’t increase yields, but it does reduce disease pressure by adding genetic diversity, and it brings a quality benefit,” he comments.

“However, think about your end market and maturity dates before taking the plunge.”

Relay cropping is where a second crop is planted into a standing crop, giving two harvests in a year.

“There were some good examples of this in North America – for example, where they are drilling soya beans into wheat.

“The wheat is harvested and the bales picked up, leaving the soya beans growing.”

Another version is strip intercropping, which involves having separate strips of crops grown alongside each other in the same field. Originally started for erosion control, it has since developed as a method of reducing risk.

“There are two main reasons for doing this,” he suggests. “It allows beneficial insects easier access into the middle of the field and there are higher yields from the ‘edge effect’.”

He adds that this principle can be applied on a smaller scale by alternating rows of two crops.

“The benefits include a reduction in disease in high-risk crops, so reducing inputs and lowering disease incidence.”

Crops such as radish, lentils or buckwheat are grown with wheat, allowed to scavenge for nutrients and then die off, releasing the nutrients back to the wheat in the spring.

“Temporary is the important bit, as the companion isn’t present when the cash crop is sensitive to competition in the spring,” he explains.

“The companion helps to confuse any pests and gives some diversity in the autumn and winter. This method may have a future role in the UK for barley yellow dwarf virus control.”

The same principle can be used in oilseed rape, where crops such as buckwheat and vetch are sown with a winter oilseed rape crop.

“This is a no brainer,” stresses Mr Howard.

“French research shows there’s a 0.3t/ha yield benefit, a 30kg reduction in the amount of nitrogen required, as well as less herbicide and insecticide used. Better germination is seen, too.”

This is where two crops are planted and harvested at the same time.

“A good example of this is peola, where spring oilseed rape and spring peas are grown together.”

The peas grow up the rape plant, using it as a trellis for support so it’s easier to harvest. Done with 75% seed rate of both, there’s no need for nitrogen and usually only one herbicide is required. Production can go up by 30%.”

Triple harvest is where farmers get three harvests from one planting, perhaps by growing buckwheat, red clover and winter oilseed rape.

“In this situation, you would harvest the buckwheat in the first autumn, the oilseed rape in the following summer and the red clover in the autumn, 15 months after planting.”

This involves sowing a non-cash crop into an established crop.

“In the UK, this has an obvious place where maize is being grown,” believes Mr Howard.

“Once the maize is knee high, it can be undersown with grasses/legumes. These hold the soil together, as well as working as a cover crop, and could be used as forage.”

A living mulch is where you have an undersown crop in place for a few years.

“In France, there was a good example of a lucerne crop being used in this way. It was in place for four years, with four other crops being grown in it in that time.

“Yields weren’t reduced, but both fertiliser and fungicide use was down. The farmer saw a €140/ha (£120) benefit.”

Pasture cropping is where farmers plant a cash crop into permanent pasture.

“This is done in Australia by using the time when the grass is dormant to get another crop, often oats, from pasture land.”

Finally, there is agroforestry, where you grow trees in arable fields.

Variety mixes, companion cropping in oilseed rape and undersowing are the three easiest ways for UK growers to get started, suggests Mr Howard.

“None of these are difficult to do or require specialist equipment,” he says. “A bit of forethought and some planning are all that is required – along with the right attitude.”

On Bockhanger Farms, he has grown peola (spring rape and spring peas) with success, with the legume element being physically supported by the rape component.

“Although we don’t grow oilseed rape any more, if we did, it would be with a companion crop,” he adds.

He plans to continue experimenting with different techniques and aims to have up to one-third of his 360ha farm intercropped in the next five years.

With some of the other forms of intercropping, there are often more considerations, he admits.

“Factors such as drilling depth, row width, harvest dates and variety choice all have a bearing, as does weed pressure, soil fertility and crop rotation.

“Then there are market and machinery considerations, as well as herbicide approvals and any separation requirements. In general, the equipment is already there, but you have to be prepared to think differently.”

That final point is the biggest barrier, he concludes: “Mindset is so important. It can be done, but it is knowledge-intensive and it requires planning and managing.”

Andrew Howard’s Nuffield report The Potential for Companion Cropping and Intercropping on UK Arable Farms is available on the Nuffield International website (www.nuffieldinternational.org). He was sponsored by AHDB Cereals and Oilseeds.