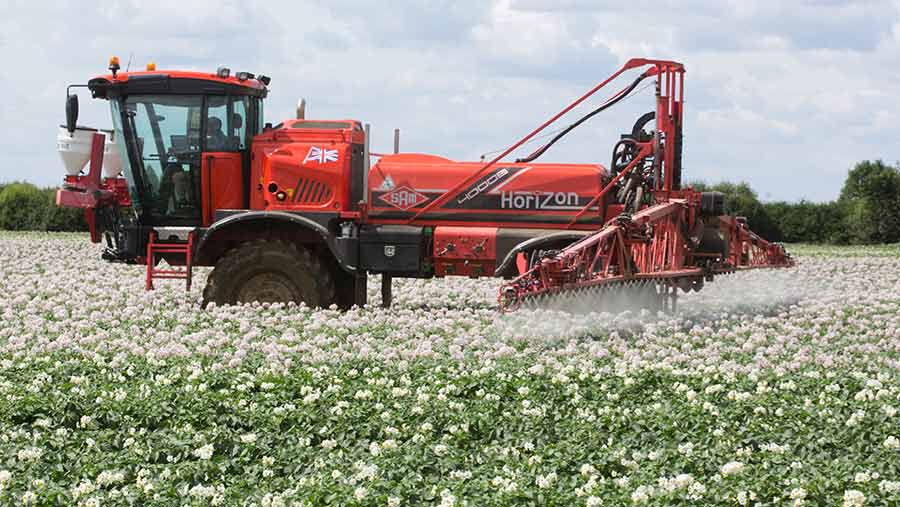 Fungicide use data reveal that potato growers have already adapted their strategies to manage a new resistant strain of blight, although more needs to be done to combat the threat of tuber blight and further resistance developing in 2018.

A strain of the most costly disease of potatoes, Dark Green EU37_A2, has spread to the UK since being discovered in the Netherlands in 2013.

Of particular concern is its reduced sensitivity to fluazinam, an active that has been a blight control lynchpin since the early 1990s. This prompted warnings by resistance experts last season to change fungicide strategies.

See also: Tips for controlling weeds without linuron in potatoes

It is then favoured for tuber blight control mid-season and late on in combination with desiccation sprays using the herbicide diquat.

Data from crop recording software GateKeeper indicates that the industry took the warnings seriously (below), with back-to-back and late season use falling and applications of co-formulated fluazinam products increasing.

Following the advice has since proved wise, with James Hutton Institute’s blight expert David Cooke reporting a dramatic spread in the EU_37 strain, picked up in population monitoring across England.

“It was found in Kent, North Yorkshire, West Midlands and most recently in Suffolk, although it hasn’t been found in Scotland or the South-West yet,” he explains.

“These discoveries are only accounting for samples that we have received, so there could be further outbreaks that haven’t been reported.”

As the 2017 season ended in October, it also became clear that tuber blight had been more of a problem in the UK during the year, despite relatively low incidences of foliar blight reported by blight scouts as part of AHDB’s Fight Against Blight monitoring initiative.

So far, tuber blight samples sent to Dr Cooke have been attributed to a mixture of strains, with Pink 6_A1 responsible for problems in Scotland and England, while 37_A2 has also been implicated in some English outbreaks, including the recent discovery of infection in Suffolk.

“There is a concern that people only used fluazinam for late season applications and that is a dangerous scenario. [The active] shouldn’t be relied on for tuber blight control now,” Dr Cooke adds.

Across the Channel in Belgium, 2017 was a similar season to the UK. Very little in the way of foliar symptoms were seen, but tuber blight has been a problem.

Agrochemical company Belchim’s Belgium-based blight expert Stef Dierickx says he saw one on-farm example where the crop was completely free of foliar blight but full of tuber blight in store, and he attributes this largely to conditions.

Plotting the growers blight applications against rainfall data showed that each spray in his comprehensive blight programme was applied immediately after a rain event.

“This enabled zoospores to travel in from elsewhere – from dumps or volunteers – and get washed into the ridges, as rain occurred at the end of an interval when little fungicide protection existed in the soil and canopy,” he adds.

Considering the “hidden” blight year of 2017, Mr Dierickx questions if there is such a thing as a “low risk” season, as blight becomes more unpredictable and aggressive with the ability to cycle in as little as four days, instead of seven.

Throw into the mix a strain such as EU_37, who’s zoopores aren’t controlled by fluazinam, and the disease is becoming much more challenging to control.

His key message for growers is to load up the programme with tuber blight-active fungicides during the appropriate crop development phases, with the cyazofamid-containing Ranman Top the strongest option.

It provides good leaf protection and during wet periods is washed down through the canopy to help protect ridges. It is also active against zoospores in water droplets – a critical factor in robust tuber blight control.

He adds that active depletion within a potato canopy over eight days can be significant, as it is diluted by natural breakdown, rainfall or irrigation and water soaking through the soil, so rates must be kept robust and intervals tight to ensure the product is working effectively.

Belchim sees Ranman Top as suitable for the rapid canopy phase and again later in the season, leading up to and including desiccation.

Mr Dierickx also stresses that although fluazinam may be ineffective against EU_37 zoospores, it remains active against other blight strains and can still play a valuable role in blight programmes.

Positioning is key and it should not be relied on late season, particularly on crops destined for store.

In most cases, fluazinam should be used in first or second sprays and in the stable canopy period. Wherever it is used, it should always be in partnership with other actives.

“The easy solution to resistance – as seen in fluazinam – is to stop using the product altogether. However, this increases selection pressure [on other products] and the chances of selecting a new strain.

“Perhaps the more [practically] difficult and expensive way is to mix modes of action [including fluazinam] and use curative compounds – there is a need for more varied blight programmes to reduce that selection pressure,” Mr Dierickx says.

Mr Cox echoes these sentiments and says it is particularly critical that the few tuber blight actives remaining are protected as much as possible.

New blight fungicide Zorvec will be used in the UK for the first time this season, sold in a twin pack with Gachinko, which contains amisulbrom – one of the three remaining tuber blight actives and in the same resistance group as cyazofamid.

Another pack option will include Rhapsody, which contains cymoxanil and mancozeb, and it is essential that Zorvec itself is used with the partner product to reduce the risk of resistance.

The industry will also need to take care where replacing fluazinam in blight programmes and try to avoid putting too much pressure on the QiI fungicides, so Mr Cox suggests using actives such as zoxamide and dimethomorph, which can help with mid-season tuber blight control.

“Although it appears we have many fungicides to control blight, there are few options late season and they are only from two resistance groups.

“We need to take extreme care to protect these modes of action and programmes will need careful planning to avoid running out of options in the future,” he adds.

The options for replacing or complimenting fluazinam in programmes are plentiful. However, growers are faced with the quandary of how to adapt late season programmes.

“Late season fluazinam use when mixing with diquat at T1 burn-off will now be tricky at best,” says Mr Cox.

Using fluazinam at burn-off aims to coat ridges with active ingredient and kill zoospores before they wash down onto tubers during rainfall.

Mr Cox says there are complications when using these alternatives at burn-off, with Infinto having limited doses.

In many cases these will be used up during stable canopy where its strengths are best utilised. Also, some end-users won’t allow its application close to harvest.

Amisulbrom-containing Shinkon is a product not widely used, so growers and agronomists have little experience with its efficacy at the end of the season.

It is also in the same chemical group, QiI (quinone inside inhibitors), as cyazofamid in Ranman Top.

Fungicide Resistance Action Group (FRAG) guidelines suggest no more than three consecutive sprays of QiI fungicides are recommended, and they shouldn’t represent any more than 50% of the programme.

“The other issue is that products mixed with diquat can enhance its activity [with wetters or adjuvants in the formulation]. This increases the risk of tuber damage after application and there is a concern on crop safety when using Ranman Top at the T1 burn-off timing,” explains Mr Cox.

Reduce selection pressure and the rise of EU37_A2 by: