Giving visitors a chance to “get lost” has proved an inspirational idea for one Norfolk farming family. Tim Relf finds out how a maize maze has been key to a growing diversification and the part that Gatekeeper software played in its creation.

Some of the original visitors, who came as kids when the Hirst family first opened the gates on their maize maze more than a decade ago, are now bringing their own children back.

This year’s offering, covering 4ha, is in the design of a barn owl. “We always have a theme, which we try to tie in with food and farming,” Richard explains. “This year it’s focused around British wildlife and is called ‘The Not-so-Far Safari’.”

Last summer, the shape was a lamb; the previous year it was a combine. “It’s always a different design and we try to include a subtle educational message.”

The first maze the family created was in 2007. “That was a really wet summer and the crop wasn’t great,” Richard recalls. “On our opening day we had nine members of staff and only six visitors. We wondered what on earth we’d done!” 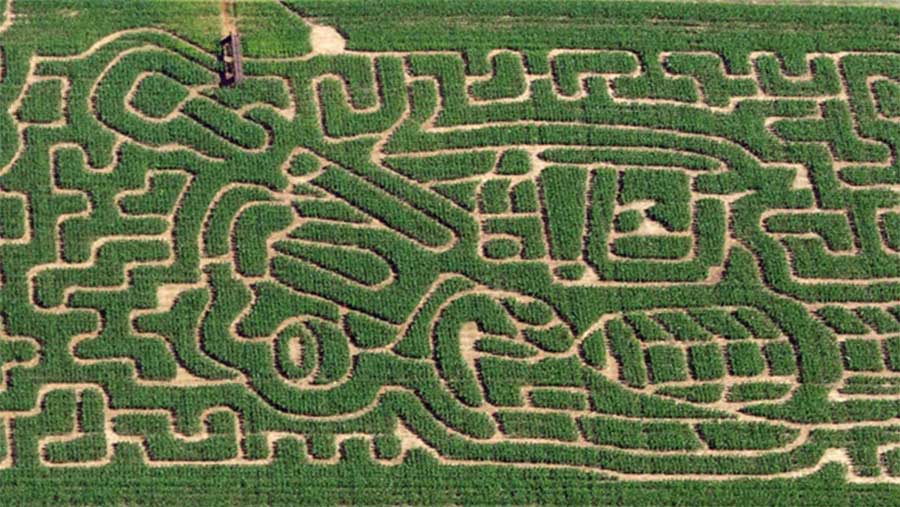 Since then, the venue has gone from strength to strength. They’ve added other attractions, play equipment and events, rebranding what was initially Hemsby Mega Maze into Hirsty’s Family Fun Park in 2015.

The three main seasons are the spring when they host an ‘Easter Baananza’, allowing kids to see young animals in Farmer Hirst’s Lambing and Calving Shed; the summer when the maze is a perennially popular draw; and the autumn when then ‘Halloween Hoot’ gives youngsters the chance to pick a pumpkin then create their own scary design in the carving tent.

How the maze diversification started

The kernel of the original maze idea came to Richard and his wife, Katrina, when they were visiting friends in Nottinghamshire who ran a maze but were selling up. Inspired, they bought some of the kit – everything from benches to a burger van.

“There are about 450,000 people living within 20 miles of us, so even though it’s not a huge catchment area in terms of people, there’s a lot of tourism in this area and we’re on the main road through to the coast at Yarmouth,” says Richard.

“We spotted an opportunity at a time when we were looking around for an enterprise to run in tandem with our farming.

“We get a lot of people returning every year. It’s great that they want to come back, but you need to have something new for them so you’ve got to keep adding on.”

The latest investment has been upgrading the crazy croquet game, which complements a range of play options, such as trampolines and swings, and a café.

“The Funpark site is fenced so it’s very safe – we’ve worked hard to create a very relaxing and very friendly feel. I talk to as many visitors as possible – hopefully they get a sense of how much of a family-orientated business this is.”

Alongside Richard and Katrina, their son Robert and daughters Fiona and Eleanor are all involved, along with Robert’s girlfriend Becca. 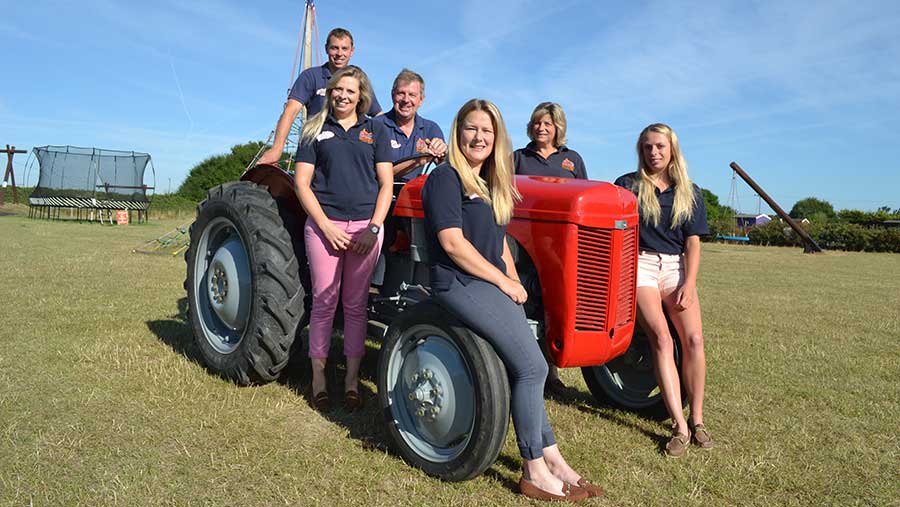 “The Funpark represents a total investment of about £150,000, but when you look at levels of return on capital, right now it makes more sense to invest in this diversification or the livery yard that we run than it does in farming.

“It’s also a relatively quick return compared with farming. The wheat we combine in the summer 2018 will have been drilled in the autumn of 2017, but we won’t get paid for it until August of 2019.

“The Funpark is very much like farming in one respect, though – business is very weather dependant!”

The farm, which Richard’s grandfather bought in 1955, covers 300ha of their own, and they contract across another 150ha.

They run a range of enterprises including milling wheat, malting barley, vining peas, sugar beet, potatoes, salad crops, a 120-head Red Poll suckler herd and 380 ewes. They also fatten pigs and have converted a range of farm buildings into accommodation for seasonal workers.

“A lot of the meat we’re selling here is our own. In terms of beef, anything that doesn’t make a choice cut ends up as a burger. We’re also currently selling 15% of our lamb direct to the public, but this is increasing.”

Advertising and social media has been important but, in terms of the maze, part of the marketing is done by the crop itself, Richard explains.

“If people drive past and it’s not high enough, they won’t stop. It doesn’t need a lot of agronomic input, but it does need the right weather and I was worried this year because of the cold April and May, but in the end it’s grown well.”

Visitors often spend an hour or longer (they’ve got the option of having a map, in case they get irreversibly lost!) exploring the maze and interacting with various quiz boards dotted around it.

Creating it was a huge challenge in the early days, he recalls. In the first couple of years, the design had to be drawn on graph paper and marked out by hand – a task that took four people two days and involved more than 2,500 bamboo canes.

That was before they even started cutting out the crop, by hoeing or mowing it, to create the paths and make the pattern.

They later enlisted the help of a hand-held GPS, but now a unique partnership bringing together a range of experts means they can approach it in a groundbreaking way.

Using the Farmplan Gatekeeper software that Richard uses for a host of crop recording and management tasks, enlisting the help of the Angus Mewze of Mazescape design company, the know-how of Carl Pitelen of John Deere dealer Ben Burgess, and the skills of contactor DH Barnes, they now actually “drill the design”.

The artistic vision was imported into Gatekeeper software which, with some modifications, could then be exported so the John Deere’s GreenStar precision farming system and a Ben Burgess RTK correction signal could follow it. 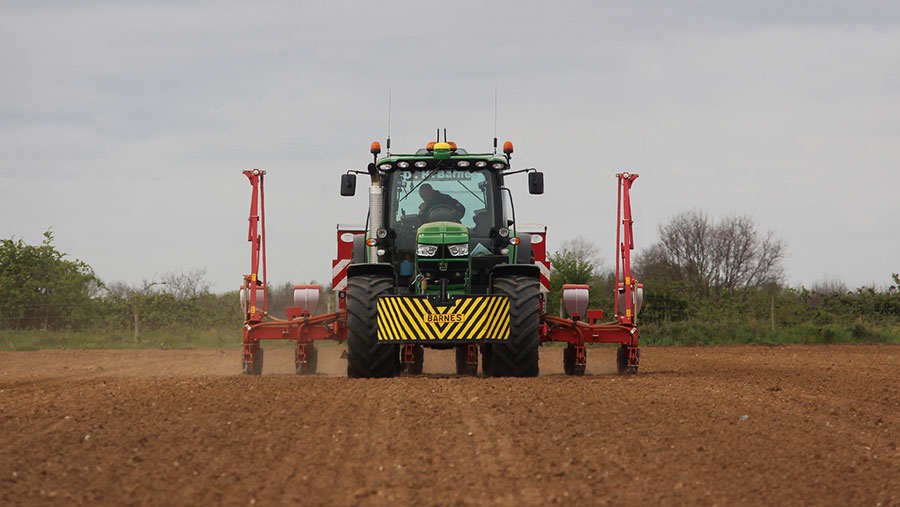 So the tractor and Kverneland drill knew, not just precisely where they were in the field, but also understood the desired pattern, along with all the field’s features.

This allowed each of the drill’s eight rows to repeatedly click on and off many, many times, resulting in the detailed artistic creation. The field was drilled twice in different directions, guaranteeing thick “walls” in the crop.

It’s been an intricate business – “as precise as playing a piano”, according to Carl – and one that shows the potential for precision technology.

“It’s certainly an unusual use of Gatekeeper, but it shows how versatile the product is,” says Farmplan support manager Andy Wolff.

“A lot of customers use the software for traceability and legislative compliance and so they can make better management decisions. With subsidies set to fall and disappear, it’ll be ever-more important to interrogate data and see the relationship between, say, fertiliser applications and yields.

“Gone are the days of making gut-feeling decisions. Agriculture is all about evidence-based decision-making and Gatekeeper is a brilliant tool to allow growers of all sizes to do that.”

Richard adds: “I’ve used Gatekeeper for about 20 years, along with Business Manager which is a great tool for helping run the overall business, particularly given how diversified we are.

“The smart technology and innovative thinking of everyone involved with the maze means we’ve saved valuable time and money by not having to buy and plant seed for bits of the field that we later would have to cut out.”

Meanwhile, all the family’s hard work has been recognised, as well as by happy customers, by local experts – Hirsty’s won the 2017 Norfolk County Farm Business Competition, organised by the Aylsham Agricultural Show Association.

“The Funpark now accounts for about a third of the overall profit. Farming can be uncertain and volatile so we like to think we’re protected against whatever Brexit might bring because we are so diversified.

“I am sure my grandfather would be amazed at how the farm is now compared to when he bought it – but I’m sure he, like the rest of us, would be really proud of what we as a family have created here.”