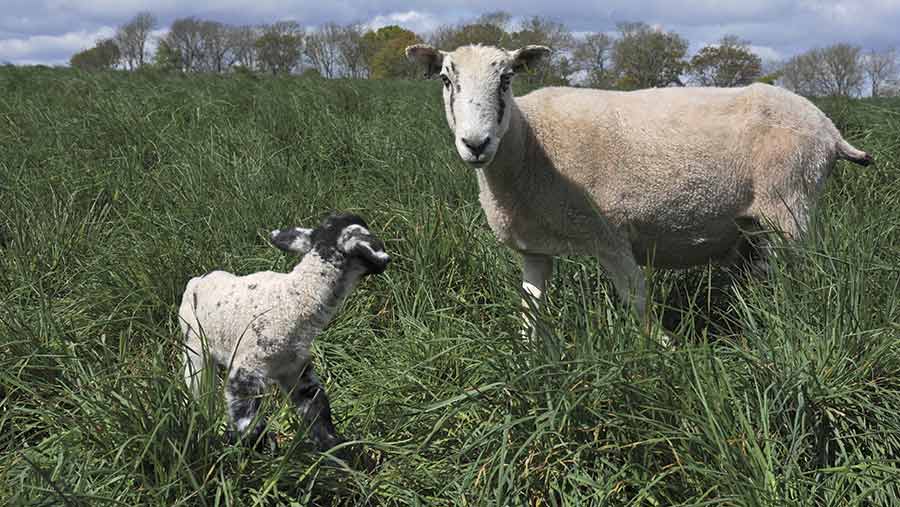 Returning to farming practices common 70 years ago is the radical plan for one Hampshire farmer looking to cut his agrochemical spend by putting half of his 1,000ha arable estate back to grass.

Tim May is switching to three-year grass leys before his cereal crops on his downland farm to build soil fertility and counter rising costs and static yields.

Sheep are grazing his grassland and cattle are planned for next year to cut costly inputs and make the farm business more resilient for the future.

He says with prices static, rising costs and plateaued yields, continuing with the status quo would not allow him to grow the business.

“We are running out of chemical options and what is left is only going to get more expensive – a new active isn’t going to give you three to four percent growth per year,” he says.

Mr May is backing his radical plan by going organic, preferring to outcompete weeds and suppress disease by extending his farm rotation.

Livestock in the arable rotation part 3

This is part three in a four-part series looking at livestock in the arable rotation.

Catch up with part one in the series which showed how sheep were making the most of vegetable waste on light land in Suffolk.

Part two in the series examined how sheep and cattle were helping the battle on blackgrass in east Yorkshire.

Look out for the final article in the series in June.

His new grass leys are being grazed by a flock of 1,700 ewes, while a large low-cost dairy enterprise is to set up and running next year in a share-farming arrangement, with the first heifers already on-farm.

Mr May says his “lightbulb” moment came when he realised that he could make more from each acre by intensive mixed farming rather than monocropping cereals. 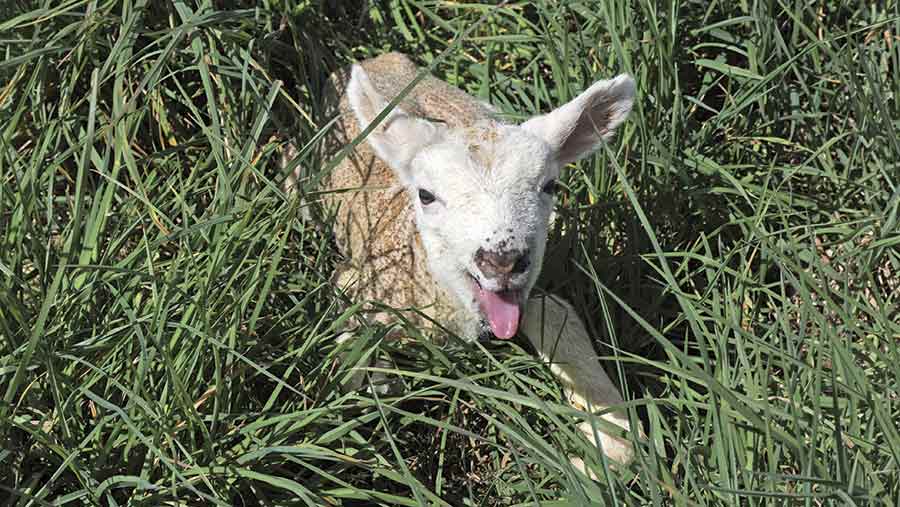 The idea of incorporating of grass on the farm grew from there and Mr May hopes his Kingsclere Estate on the Hampshire Downs can be a self-sustaining farming system.

After gaining a Nuffield Scholarship, Mr May embarked on a world trip to study holistic farming methods, and then put the principles into practice on the gently rolling estate between Basingstoke and the M4. 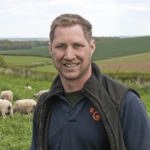 Some of these methods such as reduced tillage were already being practised on the farm as the chalky loam with clay caps and flints were wearing out a set of plough points in as little as four hours.

The leap to introduce grass was made in spring 2013 after the very wet winter left a lot of ground needing to be reseeded.

The farm had been following a rotation of two wheats followed by oilseed rape and barley, but the difficult winter signalled to Mr May there were problems with that system.

Now, he has split his ground into eight cropping blocks of 120ha each, and each season four blocks will be in cereal production and four in grass, with a one, two, three and four-year-old ley in each block.

He says building organic matter is crucial to achieving good yields on his chalky dry land, with Mr May putting the blame for poor harvests in the past down to drought. 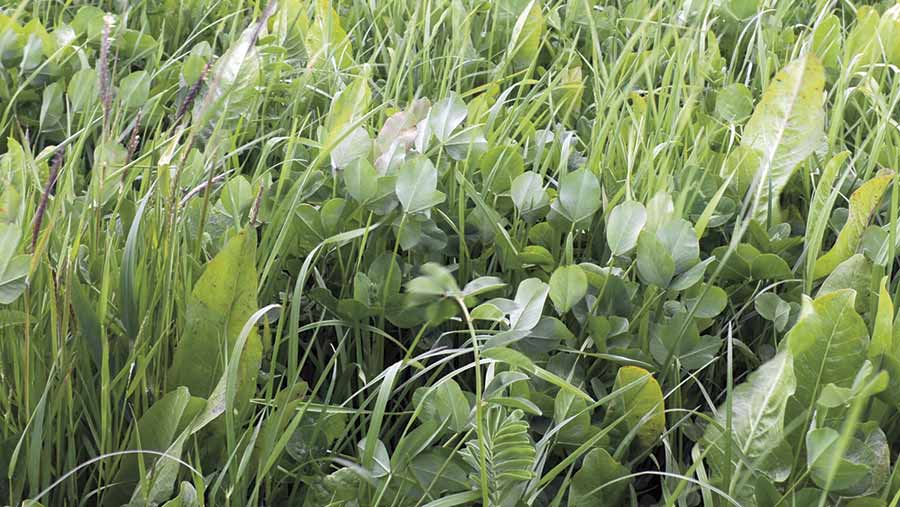 Yields are unlikely to rise on an organic farm, and he has budgeted accordingly, but he says improving his soil health and cutting costs will increase profitability.

Purchasing fewer inputs will shield the business from possible future prices falls, and Mr May hopes to build a brand identity for the estate which will allow him to market direct a big proportion of the meat, milk and crops.

In addition to sowing grass, Mr May has made increased use of his cereals by grazing them over winter with his sheep until they reach stem elongation and spring growth begins in earnest.

He says that crops have suffered no yield penalty after being grazed until that stage on his free-draining land, and it has improved disease control, as stock graze the older leaves which could carry disease through to spring. 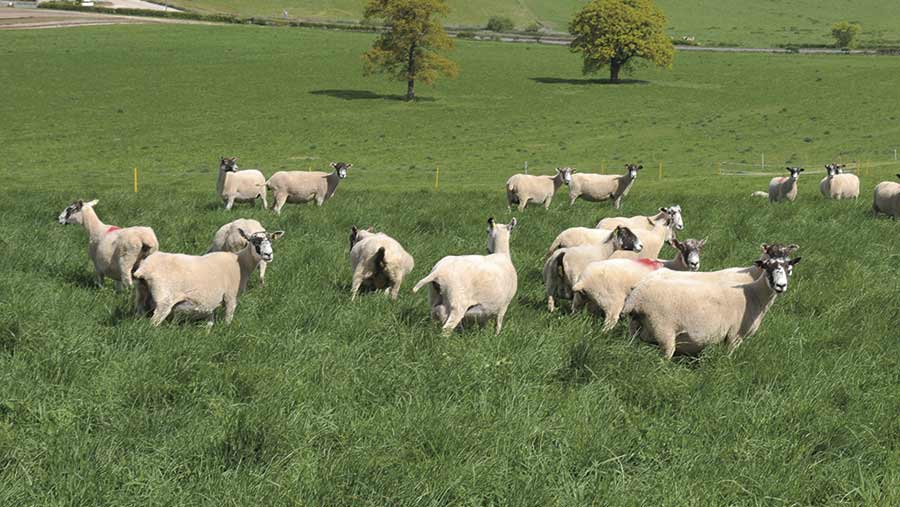 This means crops do not get anything spent on them in the autumn, and if they are not performing come spring then they can be replanted without losing too much investment.

The flock of Mule ewes were purchased from a local sheep farmer in 2013, who also taught him the principles of grassland management.

Since then several different breeds have been purchased as replacements, including Lleyns, Suffolks and wool-shedding Exlanas.

Using large breeds on an outdoor system might raise eyebrows among shepherds, but Mr May says he finds the bigger ewes favourable as they produce a better butchers lamb and trade well in the cull ring.

The flock is outdoor lambed in May, using the drift lambing method where in-lambers are moved to a fresh paddock each day, leaving the ewes which have lambed behind to allow them to be separated for easier management.

This is significantly later than most ewes are lambed, but Mr May says this was timed specifically for grass growth to have started to feed ewes in the crucial final stage of pregnancy rather than at the point of lambing.

This means that less bought-in feed is required to support the ewes, cutting costs, and lambs are also able to be sold in the post-Christmas market, after sales numbers have peaked and prices are rising.

By next year, half the farm will be down to grassland, which is when the share farming dairy enterprise will be launched.

Mr May opted for an outdoor system which can be scaled up quickly rather than invest in expensive assets such as sheds which are costly to adapt for a different system.

The dairy herd will calf in a spring block and be milked outdoors once a day in a portable parlour, with cattle entering from the block they have been grazing, and exiting into fresh grass.

Five reasons why extending the rotation could improve an arable business