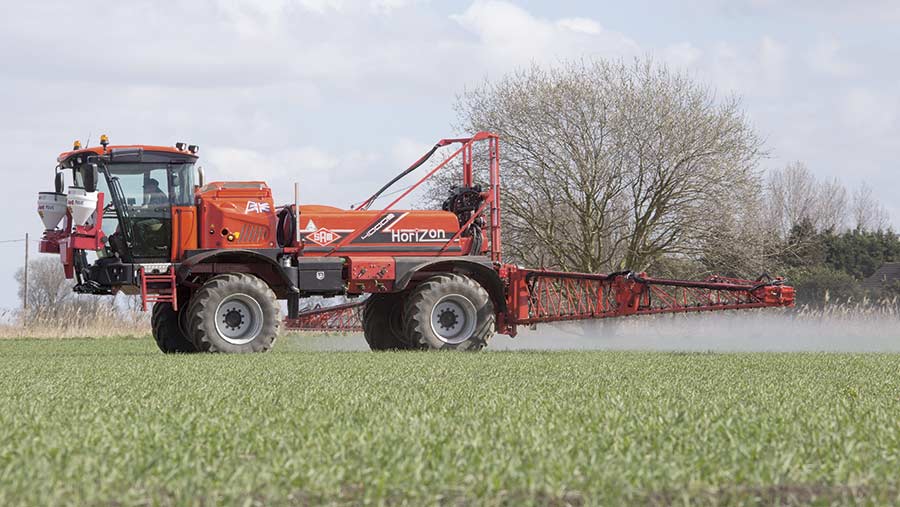 For many growers, blackgrass is their undisputed primary weed problem, and has caused modifications to cultivations, crop rotations and herbicide applications.

And while a forensic focus has been necessary to control this aggressive grassweed, it should not be at the expense of neglecting management of other weeds that are also capable of causing yield losses.

This can be difficult in some circumstances, as control methods for one type of weed will encourage the establishment of another, meaning selecting the correct combination of chemical and cultural controls is critical.

Get the lowdown here on the best way to manage wild oats, Italian ryegrass, brome and annual meadowgrass.

There are two species of wild oats that are weeds in the UK – the common wild oat and the winter wild oat.

The common wild oat (Avena fatua) is an important weed in all parts of the UK and grows in most soil types, causing problems in winter and spring crops. The winter wild oat (Avena sterilis ssp. ludoviciana) has a more localised distribution and is an issue in winter crops.

“We suspect, but can’t be certain, that there are more winter wild oat infestations than growers are aware of,” says Niab Tag weed specialist John Cussans. 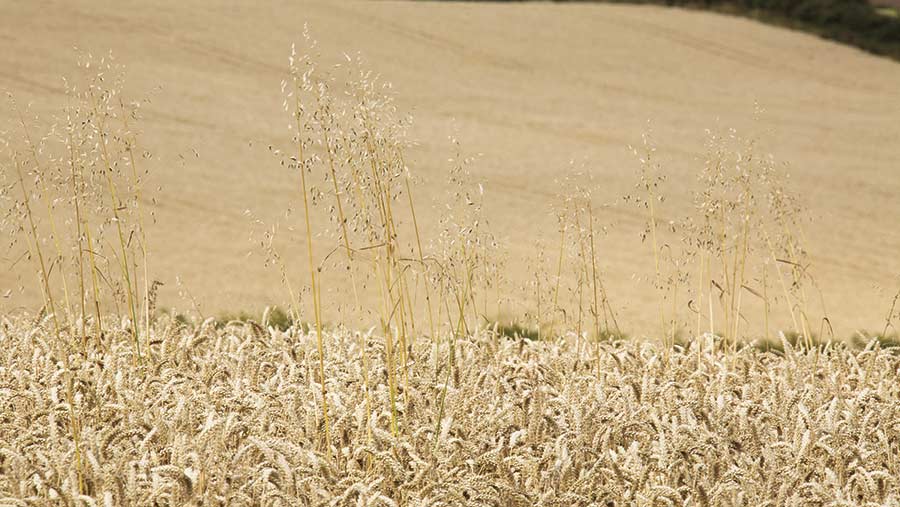 “It matters, because it means you will need to change your control strategy accordingly if that is the case. With winter wild oats, you will need to use some autumn residual herbicides to be sure of success.”

Whether you have one or both types, wild oats are very competitive weeds and can act as hosts for pest and diseases, such as barley yellow dwarf virus.

About one-third of plants will germinate in the autumn, from September until early November, with the remainder in the spring, from January to early May. After a cold winter, spring emergence can be substantial.

As a result, the emergence pattern of wild oats is much more variable than for other grassweeds and has a bearing on their control.

In addition, wild oat seedlings can emerge from greater depths (10-15cm more) than other grassweeds because of their large seed size. This means long-term population trends are barely affected by cultivation method.

Fortunately, populations tend not to build up as fast as other major grassweeds as fewer seeds are produced. The longevity of seeds in soils deep-cultivated annually is not great, and will decline by about 80%/year. In the absence of cultivations, survival is greater.

However, its more protracted emergence and potential to emerge from greater depth means that non-chemical control methods, such as later drilling and spring cropping, are less effective than they are for other grassweeds.

The spread of seeds by machinery, straw and manure should be reduced as much as possible to contain the problem to distinct patches. Wild oat seeds are not thought to survive anaerobic digestion.

Hand-rogueing plants, or spraying off patches in June, can be effective. This should be done before seeds start shedding (late June onwards) and whole plants must be removed, or regrowth will occur.

Consider mapping wild oat patches in June/July and identify which species is present.

Delaying post-cereal harvest cultivations for as long as possible encourages the natural loss of seeds that are lying on the soil surface.

Unfortunately, the best cultivation strategy for wild oats may conflict with those for other grassweeds, such as sterile brome.

Ploughing does give useful control of wild oats, despite that fact that the seed germinates from greater depth. In general, wild oats are a weed of non-plough systems.

Delayed drilling has fewer benefits for wild oat control because of its protracted germination pattern. Young seedlings are sensitive to frost, but their hardiness increases once they reach the three-leaf stage. 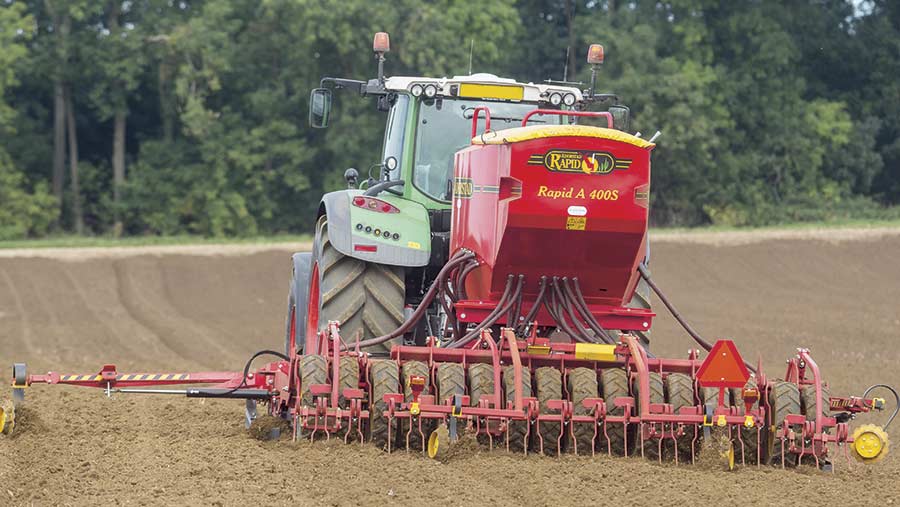 However, the time of sowing can be used effectively, as later-sown crops provide an opportunity to destroy any wild oats before sowing.

Establishing spring crops by direct drilling or with minimal soil disturbance may reduce the numbers of wild oats that germinate in the crop. Any plants that have already emerged can be destroyed with a non-selective herbicide.

Wild oats are very susceptible to competition, especially in their early growth stages.

All of the most-effective wild oats herbicides are either acetyl coA carboxylase (ACCase) or acetolactate synthase (ALS) inhibitors, so are high risk from a resistance perspective.

Herbicide-resistant wild oats are widespread, so the efficacy of most herbicides is reduced.

As with other weeds, the use of herbicides should be integrated with non-chemical methods.

Post-emergence herbicides are used when all of the wild oats have emerged. These include the ACCase inhibitors known as the fops/dims/dens, such as clodinafop, fenoxaprop and pinoxaden, and the ALS inhibitors such as mesosulfuron+iodosulfuron and pyroxsulam mixes.

Pre-emergence herbicides do give some control of wild oats, but success with them depends on emergence patterns. The exception is tri-allate, which has a different mode of action and can be used to give useful control when applied pre-emergence.

An annual grassweed, spread solely by seed, it is more competitive than blackgrass and tillers more profusely. One plant can produce more than 20 heads and 5,000 seeds, so populations can build up very rapidly, while just 5 plants/sq m can cause 5% yield loss.

Italian ryegrass has a very similar biology to blackgrass, in terms of emergence patterns, seed persistence and depth of emergence.

Most ryegrass seedlings emerge in the autumn, with only 6% of the population emerging in the spring. 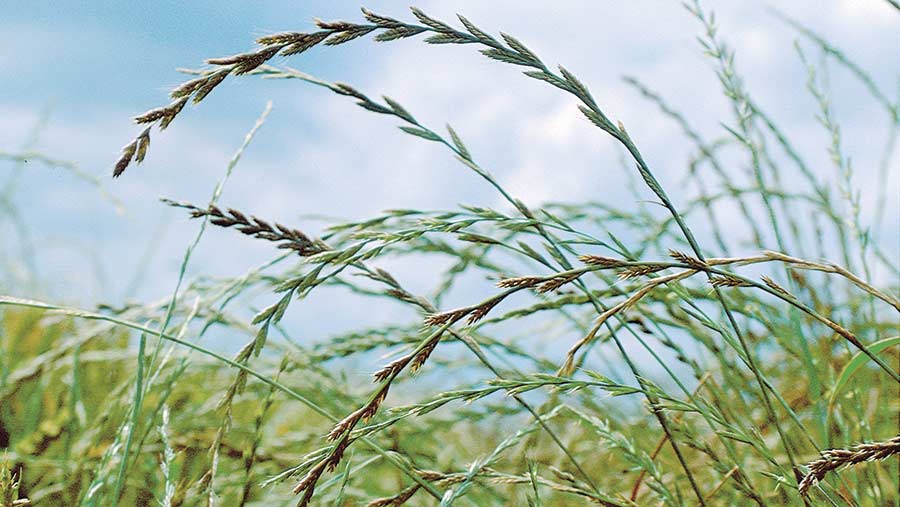 Given these similarities, the non-chemical control methods used for blackgrass are also appropriate for ryegrass, although it doesn’t respond as well to these methods. For successful long-term control, seed return must be minimised.

“Ryegrass is one to watch,” stresses Dr Cussans. “Once you have resistant populations, things can become very difficult indeed.

“Growers must be proactive. As soon as you see it, go out and hand-rogue it.”

Delayed sowing works by allowing any emerged weed plants on stubbles to be destroyed before drilling with glyphosate.

In the same way, spring cropping can reduce ryegrass infestations, although it may need to be repeated for two or three years to achieve adequate reductions in numbers. Fallowing and grass leys can also be effective, providing seed return is prevented.

As with other grassweeds, hand-rogueing and spraying off patches of the weed in early June will prevent seeding and limit the weed’s spread. The aim is to prevent patches from establishing.

Ploughing has role too. It can be very effective at burying freshly shed seed to a depth from where emergence is unlikely.

Before sowing, the destruction of any emerged ryegrass plants is essential. The use of glyphosate will give better results than the use of cultivations alone.

Pre-emergence herbicide choices include flufenacet, pendimethalin, prosulfocarb and tri-allate. All are good choices and their efficacy is only partially reduced by resistance.

Although resistance to these materials is currently less of an issue in ryegrass than it is in blackgrass, it does exist and there are no post-emergence options that aren’t affected by resistance.

As a result, once it has established, it is very difficult to eliminate.

In break crops, propaquizafop, cycloxydim, clethodim and carbetamide can give good control of susceptible ryegrass in a range of crops.

Current advice is to apply post-emergence herbicides in the autumn, at the earliest opportunity, and to rotate herbicides over successive seasons to minimise resistance risk.

There are five species of brome grasses, belonging to two different groups, that grow as arable weeds in the UK.

As different control methods apply to each group, identification is important. All species are easier to identify once the seed heads are visible in June and July.

For both, exposure to light induces dormancy and allows seed to survive for up to two years. This means ploughing can help to give good control.

In the same way, shallow cultivations that bury seeds as soon as possible after harvest and encourage germination are also effective, although there may be enough seed cover provided by chopped straw for this to take place.

Growers should wait for a weed flush before drilling, so they can be sprayed off. Delaying drilling will improve control. 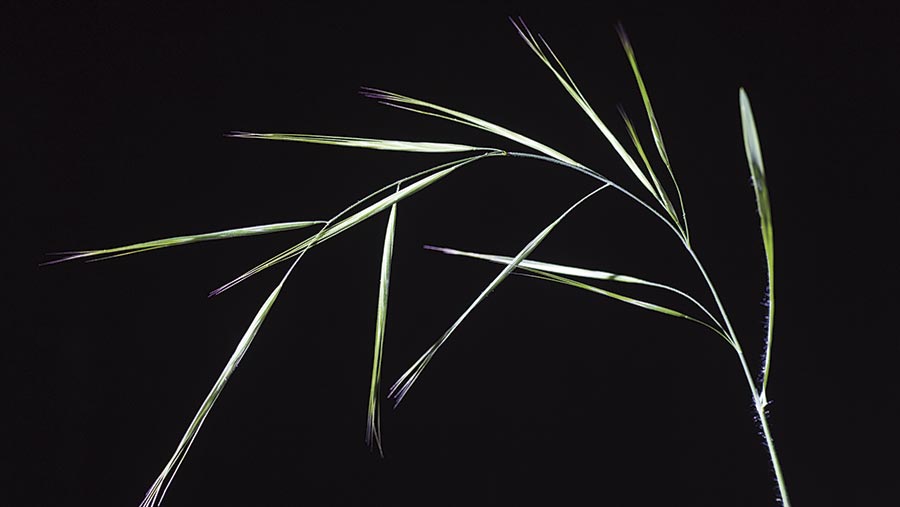 These three species have short awns and tighter, neater panicles.

At harvest, seeds are underripe, so burying them enforces dormancy and increases seed survival. As a result, the best course of action is to leave seeds to ripen on the soil surface for a month before cultivating.

After this, shallow cultivate to put the seeds in moisture, then spray off the emerged weeds with glyphosate. 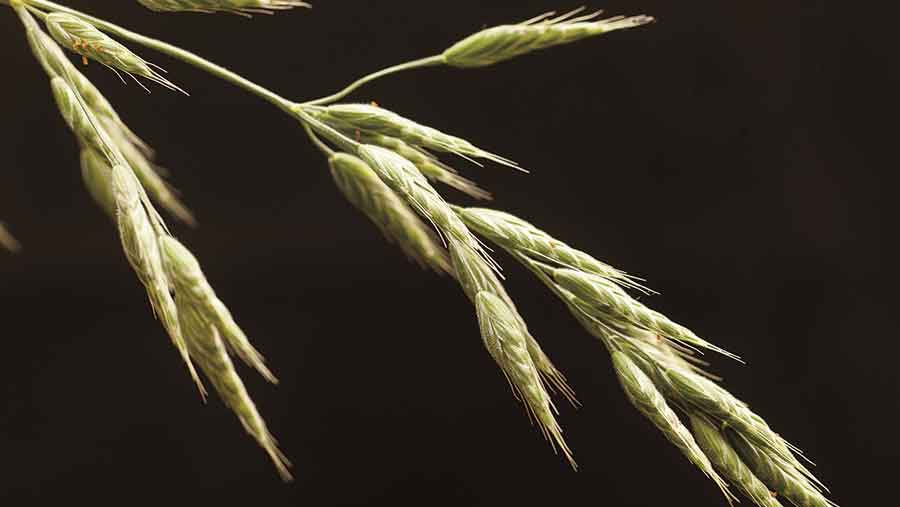 Reasons for the spread of brome

Most brome populations have weak or short-lived dormancy when seed is shed and very few seeds become dormant. Only those with initial stronger dormancy have more extended seedling emergence.

Seed will germinate when there is moisture, either in the soil or on the surface in chopped straw.

Most brome infestations begin in the headlands and field margins. Cultivations that take place close to the boundary can drag seed further into the field – with subsequent cultivations moving seed up to 50m further.

Meadow, soft and rye brome ripen later than barren and great brome, so any straw that is removed from the field may contain viable brome seed.

All bromes are capable of colonising bare patches in hedge bottoms or field boundaries, so where they exist in field margins, bromes should be mowed within two to six days after flowering to prevent viable seed forming.

Brome seeds buried by ploughing to a 15cm depth cannot emerge, although it can be difficult to bury the seed as it clumps together. Reducing the speed of ploughing tends to result in better burial.

As early drilling results in weeds in the crop, waiting for a flush of weeds before drilling is the best approach. Raising seed rates will help to maximise crop competition.

There is a limited range of herbicides for controlling brome in cereals. As with all grassweeds, chemical and cultural control methods should be integrated for an effective strategy.

For best results, a two-spray programme that includes both pre- and post-emergence chemistry should be used. All the post-emergence options are ALS inhibitors, which can only be used once in any programme.

“There’s no doubt that Atlantis [iodosulfuron + mesosulfuron] did help with brome control,” says Dr Cussans. “Where it isn’t being used any more, the weed is making a reappearance. It’s another that is favoured by no-till systems.”

A much wider range of herbicides is available for use in non-cereal break crops.

Annual meadowgrass is found across a range of habitats, existing mainly as an annual plant.

Predominantly a self-pollinating grass, it spreads through seed. Annual meadowgrass germinates throughout the year, with most emergence taking place from April until September. 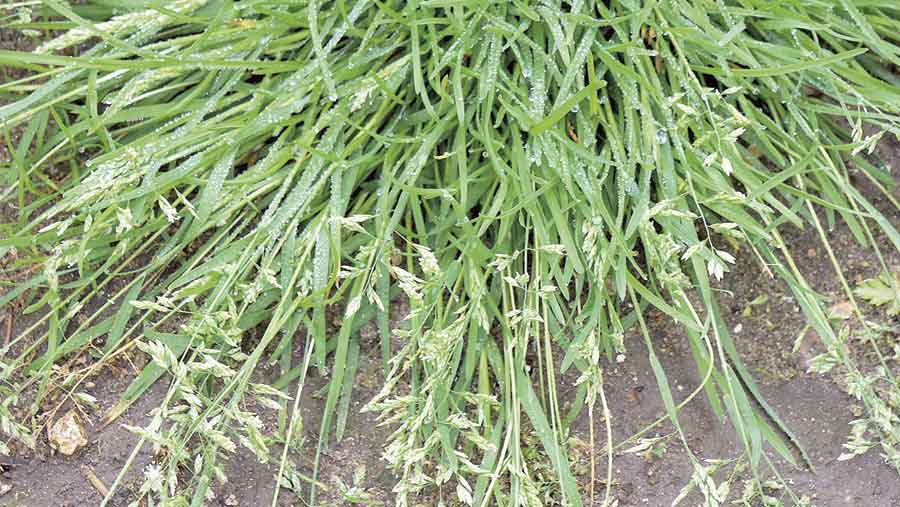 Although it flowers independently of day length, seed head production peaks in May and June, with seeds becoming viable very quickly. It is capable of producing large numbers of seeds, with a single plant producing up to 13,000 seeds.

Like other weeds, annual meadowgrass rarely grows in isolation and will be found with broad-leaved weeds and other grasses. In the very early stages of growth, it is easy to control with herbicides.

Meadowgrass problems can be reduced by:

Residual herbicides are a valuable component of a control programme and there is a range of pre-emergence materials that will give good control.