Managing risk, targeting premiums and focusing on data are three of the ingredients for success at Harnage Estates in Shropshire. Farmplan finds out more at the venue, well known to many for hosting The Arable Event.

“Risk isn’t going to go away – it’s here to stay. You just have to deal with it.” 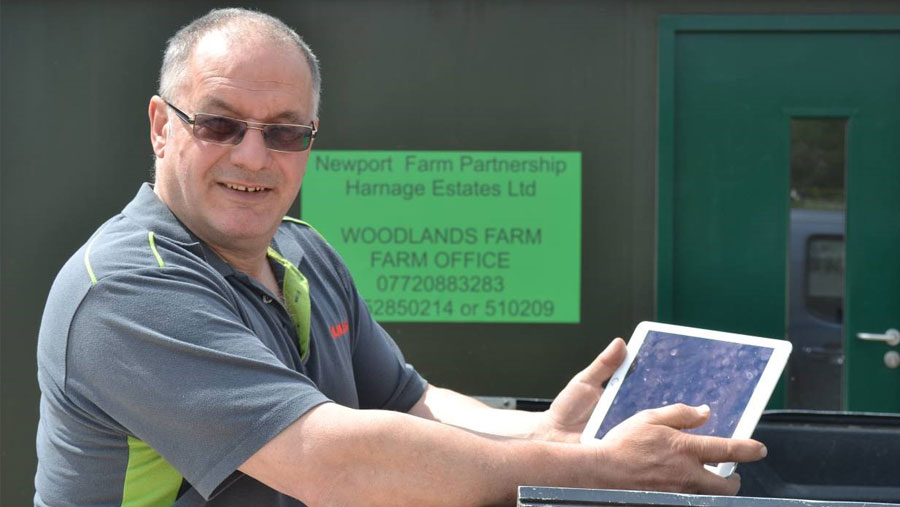 This part of the business comprises 505ha contract-farmed for Bradford Estates, with another 900ha of owned and rented ground near Cressage.

It’s a strategy which, he says, is crucial in an era when input prices and output returns, subject to so many fast-changing global factors, can be volatile and hard to predict.

About 70% of the 65ha of potatoes, for example, are grown on contract for McCain, with the remained traded on the open market.

“With a contract, you know what you’ll get so it guarantees a return on the crop. If the market prices are £250/t, the ‘free-buy’ element can be the icing on the cake, but when they’re £40/t, it obviously doesn’t work in your favour.”

Similarly, 500-600t of grain is usually sold forward, with the rest traded “little and often”.

“That way, if the element we sell forward ends up making the lowest price, it’s not a disaster. Ultimately, it’s what you average that matters – it’s not about the highs and lows,” says Doug.

It’s the same with fertiliser. “We get it as soon as the price is released so we have it on site. It’s about minimising the risk of not being able to get it when we need it and having to wait for it to arrive.”

This drive to spread and reduce risk is a philosophy that the business’s owners – brothers Simon and Justin Scott – adopt beyond their agricultural interests, too.

Originally farmers from Cheshire, they moved to Harnage in 1961 after the sale of the family-owned bakery business to Associated British Foods (ABF.

They also run companies supplying portable cabins and modular buildings, operating in the commercial debt recovery world and in the tanker-haulage sector.

Securing added value is another element of their on-farm focus, so the team targets premium outlets – an approach that calls for good infrastructure and facilities, according to Doug.

A new 4,000t grain store was built by the landlord at Weston-under-Lizard in 2016 which, with its under-floor dryer, makes drying and managing crops far easier.

“It reduces the bottleneck at harvest and means we don’t have to double-handle grain,” explains Doug.

“We grow about 1,000t of milling wheat and are relatively close to Manchester and Liverpool, which are good markets for it.

“Water is essential to growing good-quality potatoes so we also have three winter-filled reservoirs, the biggest of which is 10 million gallons. Last year was a very thirsty year and we ran out of water, but right now we haven’t used any and all the reservoirs are full.”

Cost control is another priority of Doug at Woodlands Farm and his counterpart at Harnage Grange in Cressage, James Dyball.

“The two units are run separately, but we do share machinery and labour when weather and workloads allow,” explains Doug.

“But we keep machinery costs down mainly by hanging on to kit and doing as much maintenance as possible in-house.

“We employ our own mechanic and lorry driver and have our own 44t artic for shifting straw and grain. It’s certainly never sitting idle!”

Sugar beet used to be grown on the estate but, with the nearest factory now at Newark, they swapped it for oilseed rape in the rotation, with 110ha sown this season.

“Like a lot of farmers, we have concerns over flea beetle, although the crop looks well this year so we haven’t had to do any fire-brigade action.

“The best way to control flea beetle is getting the crop off to a good start – so as long as we can get it established, rape will continue to have its place in the rotation.”

The proliferation of the pest, exacerbated by the banning of key neonicotinoid seed treatments, highlights one of the biggest challenges arable farmers are facing, according to Doug. “Our available armoury of chemicals is shrinking.

“Diseases like septoria have always been a problem in the west of the country so we’ve very worried about the prospective disappearance of chlorothalonil.

“This will have a big impact on the cereals sector. I question the science behind the ban and the loss of active ingredients actually increases the risk of resistance developing because a lot of farmers, us included, have traditionally tried to use a variety of chemicals to prevent resistance build-up.

“Every time one is removed, it ties your hands in terms of options.”

It means that the precise timing of spray applications is far more important than it was 20 years ago, he says.

“In fact, so much has changed since I joined this business in 1998,” says Doug, who originally came to Shropshire from Scotland to study an Agricultural Technology degree at Harper Adams in 1982.

“The march of technology has been the biggest change in those two decades.

“We first tried variable rate nitrogen applications here in 2008 and immediately saw its potential to help us control costs and be more responsible in terms of the environment.

“When I went to Harper, computers were the size that a whole farm office is now. Now they fit on your phone.”

It is the organisation’s integration with technology and adapting to change, particularly within their arable enterprises, which has allowed them to continue to move forward with their operation.

“We make the template on Farmplan’s Gatekeeper software then we create a map which is exported to our Ag Leader system.

“We don’t want to be under-applying or over-applying potash, given that it’s vital to crops but also a finite resource. If it’s good for the long-term health of the soil, then it’s the responsible thing to do.”

A network version means that the Cressage and Weston teams can access Gatekeeper concurrently, allowing up-to-the-minute communication and comparisons between the two sites.

Doug is a particular fan of the web app, with data passed wirelessly to machinery operator’s smartphones and tablets, allowing them to complete spray sheets as they do the work, with vital information such as times, quantities, operator details and health and safety checklists all entered.

“They allow us to update records as we work rather than having to repeat the whole process once we have finished, which makes life so much easier and gives us a lot more control,” says Doug.

“I can bring up any map at anytime, anywhere. It means I don’t have to worry about transferring information with a USB, which is useful when I am busy.

“We’re also in a Nitrate Vulnerable Zone so, if for example the Environment Agency wanted to do a NVZ audit, we could have all the figures at the press of a button.”

The use of software has brought about a virtually paperless system, vastly reduced the amount of physical data entry required and has integrated well with precision farming equipment used across the arable sites.

“We’ve found Gatekeeper to be intuitive – it’s easy to use and, if you ever need help, the support is excellent,” adds Doug. “The more you use the software, the more you get out of it. It’s an essential asset.”

Another change Doug has seen at Woodland Farm has been the venue becoming the host for the Arable Event, with 2019’s event successfully held in June.

“We’ve hosted it since 2013 and it gives us a great insight into new varieties and chemistry,” he says.

“Communication is so quick these days and data can be captured and moved at the press of a button. It’s going to become increasingly key to successful farming.”

In this fast-changing world, however, some things stay constant, laughs Doug. “We’ve grown mainly Maris Piper potatoes ever since I came here because it’s stood the test of time. The variety was introduced in 1966, so it’s actually nearly as old as me!”