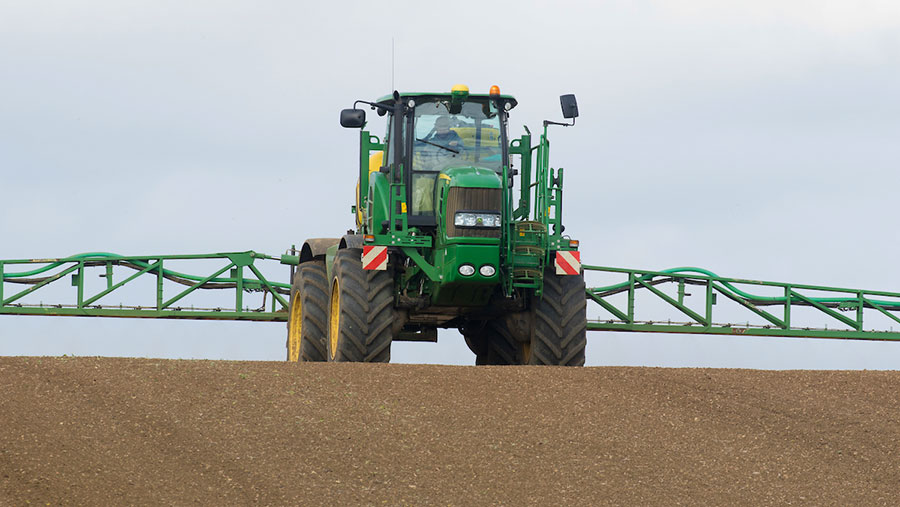 Boom stability, along with correct tyre pressures, is one of the important factors in getting a good consistent spray coverage on the soil surface when applying pre-emergence herbicides.

Tyres act as both a spring and a shock absorber. Running with tyre pressures that are too high reduces traction and stiffens the ride.

Together, the suspension and tyres play an important role in smoothing out any surface irregularities in the tramlines while spraying. This helps to achieve an even spray deposition across the entire width of the spray swath.

See also: Video: 7 pre-season checks every sprayer should have

If the boom is unstable, problems arise at the ends furthest from the sprayer. Any movement created as the sprayer passes over uneven ground is magnified at the boom tips –with wider sprayers having more problems.

The end result is that the outside of the boom travels either faster or slower as it bounces around compared to the inside. As a result, it will deposit either less or more chemical on the target than it should.

Using water-sensitive paper placed horizontally in a wheat crop shows just how dramatic this effect can be.

When a sprayer, set up correctly with the right tyre pressures, is driven over a bumpy track, the paper with the most droplets on it comes from the outside end of the boom.

In contrast, when the sprayer set-up is incorrect, the paper with the fewest droplets is taken from the same position.

An estimate suggests there is half the amount of spray deposited with the poorer set-up.

If this coverage is achieved in the field, especially against a weed with a highly visible result, the operator will be very disappointed with the level of control from such underdosing at the outside of the boom.

How to check stability

Maximum boom stability is relatively simple to check, focusing on the following areas:

Check the tyre pressures against those in the manufacturer’s handbook and ensure the various suspension components are working as they should be.

All too often, new tyres come with the same pressures that were used to blow them on to the wheel rim. If that is the case, they need altering for spraying.

For optimum spray performance, the tyre pressure should be the lowest recommended for the weight being carried.

There are two key components for boom stability – yaw and roll. Yaw is the boom swinging backwards and forwards at its outer edges, while roll is the boom ends moving up and down.

To check the roll, push the boom end down by a foot. It should come back to the horizontal and not oscillate up and down.

For yaw, move the boom backwards and forwards, checking that the suspension joints are fully lubricated and that the springs and shock absorbers are working correctly. Listen out for the oil moving in the shock absorbers as a guide.

These checks take a few moments to carry out, but can have far-reaching results.

Forward speed can help spraying efficiency by improving work rates and allowing more hectares to be covered each day.

The amount of drift created increases significantly with higher nozzle pressures and with the extra turbulence created as the sprayer goes faster.

Drag and turbulence will increase at the rate of the square of the increase in forward speed, relative to the original speed.

So, if you increase the speed from 12kph to 16kph, turbulence is increased by almost 80%.

For this reason it is essential to have a stable boom for the speed you are spraying at, to use the correct nozzles in relation to forward speed and to maintain the correct boom height.

Luckily, with modern nozzles, it is possible to swap from a standard spray to a less drifty alternative – such as the Amistar nozzle – very simply. The end result is double the work rate for one-quarter of the drift.

Wind direction also has an effect on spray drift.

While it is essential to only spray when wind speed permits, it is also important to appreciate that spraying in the same direction as a breeze tends to give less drift than when driving into one.

With the breeze behind the sprayer, its direction tends to counter any turbulence caused by the movement of the sprayer, rather than add to it.

Currently, average sprayer speed is 12-14kph. There is a good case to increase this – some fungicides, for example, have worked well at speeds up to 16kph.