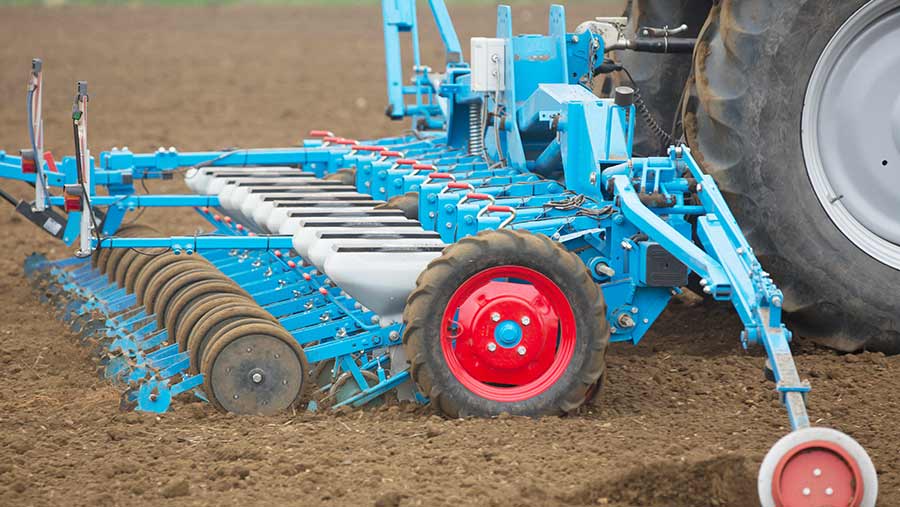 Cercospora is a disease that effects all beet crops and causes havoc for growers in warmer growing regions, including the US Midwest and mainland European countries such as Germany, Austria and Spain.

It is not a new disease for UK sugar beet growers, with documented evidence of its presence as far back as the 1930s, but it has never been considered economically damaging until recently.

Know your enemy: what is cercospora leaf spot?

The British Beet Research Organisation’s (BBRO) head of science Mark Stevens says that, in his experience, it has often appeared in sporadic patches late in the season, where just a few spots are evident on leaves.

However, there was a striking increase in 2016 and symptoms increased during 2017, after a dry April was followed by a period of relatively wet and mild weather. By late summer there was widespread and heavy infection in several fields.

“I carried out some inoculated trials in Bedfordshire several years ago to try to assess the economic impact of the disease,” says Dr Stevens.

“After three years of inoculating trials in three consecutive months during the summer, in only one month of the nine did we get any secondary spread.

What has caused it?

While this is advantageous for yields, it could be favouring diseases such as cercospora, which haven’t been an agronomic or economic problem in the past, says Dr Stevens.

Across the channel, European populations are resistant to strobilurin fungicides and reduced sensitivity to the azole group is also widespread, with growers sometimes applying up to seven sprays to keep a lid on the pathogen.

Monitoring by agrochemical company Bayer found UK cercospora isolates on sugar and fodder beet with reduced sensitivity to strobilurin fungicides in 2016, so resistance could also be playing a role in its rise.

In addition to a limited and potentially less effective fungicide armoury, anecdotal observations by growers and agronomists picked out differences in varietal susceptibility during the 2017-18 campaign.

As breeders are rightly sensitive to knee-jerk reactions, it is unfair to single out any individual varieties without concrete evidence.

As such, the BBRO is gathering information in late lifted trials this year and is working with ADAS looking at fungicide efficacy against all sugar beet diseases, including cercospora, to help provide the best advice on variety and fungicide choice.

“We are seeing differences in resistance to cercospora and we are talking to breeders about traits that could be incorporated into our future [UK] varieties.

“Also, the fungicides we have are all azole- and strobilurin-based and not a lot else, so we are looking at tools growers have elsewhere in Europe and seeing if they could help here,” says Dr Stevens. 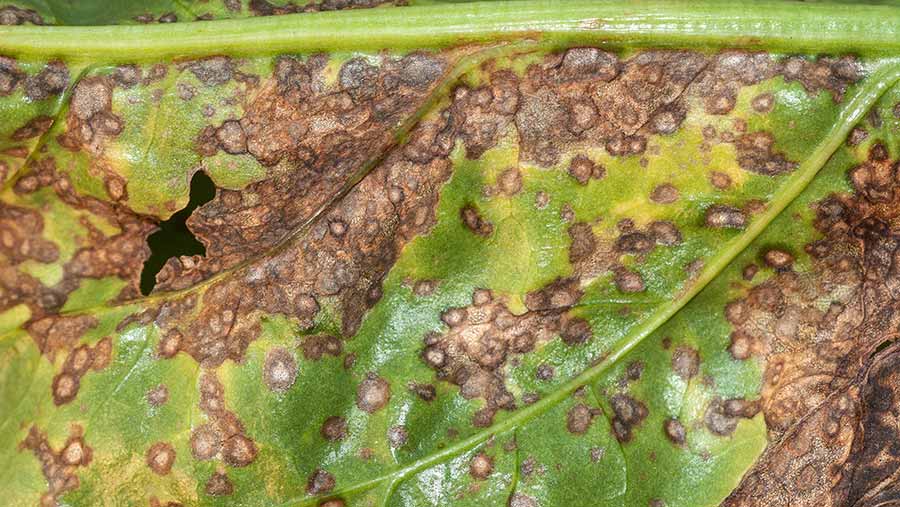 What should growers do?

With no concrete evidence of differences in varietal susceptibility – especially as weather is key for its development – and seed for 2018 already sat in the shed, it is too late to adapt variety choices this spring. However, understanding cercospora’s lifecycle can help identify and reduce risk.

“If you knew what you were looking for, you could find cercospora in most varieties last year. However, some were more prone than others and where they were also under irrigation, there were more serious issues, so that’s something that should be avoided.”

Ms Chambers says adequate rotation, weed control and clamp hygiene can reduce these sources of cercospora inoculum – spread by wind and rain splash – and planting at a reasonable distance from existing or recently harvested beet fields will help.

“Think about your drilling agenda and aim to have at least 100m between new crops and any infected beet fields from the previous year,” she adds.

BBRO advice on the application of fungicides hasn’t changed from 2017, with growers urged to apply a full dose azole and/or strobilurin fungicide at the onset of disease, typically in July.

One spray can suffice for early lifted crops, while beet lifted from October can benefit from two or even three sprays for retaining green leaf the later a crop is harvested.

He adds that with the economic threat from the disease being relatively new, there is a lot to learn on how best to tackle the disease, with azoles like cyproconazole and epoxiconazole still having good effect.

And as a result, he sees the potential for more Opera (epoxiconazole + pyraclostrobin) being built into fungicide programmes early to help mix and match azole actives through the season.

“You need to be mindful of timeliness. Don’t leave huge gaps of 5-6 weeks between sprays and so accept that this might push you into a three-spray programme.”

Dr Stevens adds that it is also crucial to keep water rates high when applying the products.

“Where some growers saw poor control and questioned product efficacy last season, it became evident they had cut back on water rates.

“With these big, leafy canopies you need to keep rates at 200 litres/ha or more, as per label recommendations seen on several products.”

It had been hoped that multi-site fungicide mancozeb – used widely as an effective protectant fungicide for cercospora in the US and for emergency use in Europe – would be available for the 2018 season.

However, Ms Chambers is hopeful the active will be approved late in 2018 for use in 2019, where it could be used as an early protectant spray or as a tank-mix partner with azole and strobilurin fungicides throughout the fungicide programme.

“Both of those fungicide groups have a single site mode of action and mancozeb will not only add to cercospora control, but [its multi-site activity] will also help increase the longevity of existing products,” she says.

Major sugar beet breeders KWS and SES Vanderhave told Farmers Weekly that they were fully aware of the situation and have cercospora resistance traits within their breeding programmes to bring into UK-specific varieties.

This could take at least five years, with varieties having to work through national and Recommended List trials. However, fast-tracking may be possible in an emergency should the disease begin to pose a more significant threat.