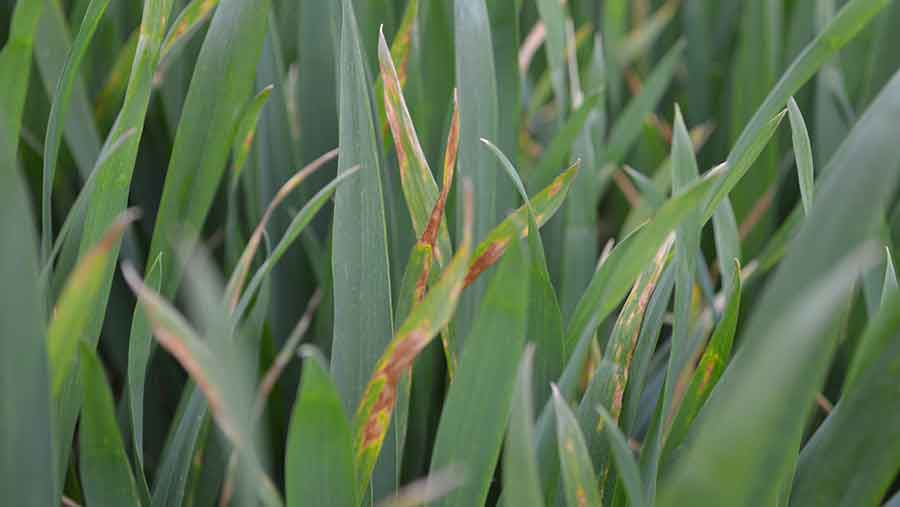 Wheat growers may have to increase rates of SDHI fungicides and perhaps use them only once in a season to counter the decline in efficacy of these products against septoria, the crop’s most damaging disease.

This disease is now 20-30% less sensitive to the SDHIs than it was two years ago, according to AHDB-funded fungicide performance trials.

This has caused rising concerns about the future use of this group of fungicides and prompting a joint initiative between the AHDB and the industry body, the Fungicide Resistance Action Group, called Fungicide Futures, to be established (see Change your approach to T0 and T1).

A similar picture on SDHI performance has emerged from Ireland, with a big shift in sensitivity occurring in 2016 and further movement seen again in 2017.

Jonathan Blake, fungicide expert at crop consultants Adas, says wheat growers may have to increase rates of SDHIs to get the desired level of control, although they are highly active in most situations. 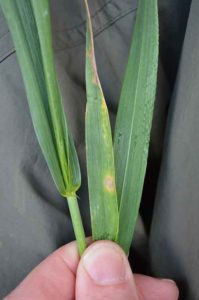 “These findings mean that it’s not clear what level of performance we will get from the SDHIs in the 2018 season.

With that in mind, growers must think about whether they are selecting for lower sensitivity in the way that they are using them,” he adds.

The well-documented decline in azole fungicide activity, however, appears to have stabilised, as rapid changes aren’t being seen any more.

“Azoles are giving 50% control of septoria in a protectant situation and 20-40% control where they are used as an eradicant.

That hasn’t changed much, but it’s interesting to note that chlorothalonil is giving 50% control – more than some of the azoles,” he says.

“Across the years, they can’t be separated on septoria. It does look as though Ascra has the edge over Aviator,” adds Mr Blake.

Against the rust diseases, the new SDHI-azole mixed Elatus stood out.

“It looked very strong in both our brown rust and our yellow rust trials. It seems that the solatenol component is highly active against rusts,” he says.

“The other QoIs (strobilurins) are not as strong as pyraclostrobin, so be careful with strobilurins where the disease is active,” he adds.

On fusarium, the azole prothioconazole came out best, with the other azoles coming close behind.

Ramularia has developed insensitivity to both the azoles and the SDHIs, with only fungicides containing chlorothalonil giving a response in the trials.

“There’s been a marked change with ramularia and it’s looking bleak. Growers must use chlorothalonil and varietal resistance where the disease is likely to be a problem,” says Mr Blake.

A shift has also occurred in net blotch, which is showing reduced sensitivity to SDHIs. That means prothioconazole is now more effective than the SDHIs, with pyraclostrobin also working reasonably well.

“Use mixture products against net blotch and be prepared to use full rates,” he says.

Rhynchosporium can be well controlled with prothioconazole or the SDHI fluxapyroxad, either alone or in mixtures, but pyraclostrobin has continued to decline in its activity and shouldn’t be relied on, he warns.

Prothioconazole was the most effective on mildew, with cyflufenamid coming a close second.

Change your approach to T0 and T1, suggest experts

Fungicide Futures, the joint initiative set up between AHDB and the Fungicide Resistance Action Group to get anti-resistance management and best practice information out to growers, will kick off in March 2018.

Given the emerging issues, chairman Fiona Burnett of Scotland’s Rural College (SRUC) stressed that growers and agronomists must tailor their programmes for next year and challenge their previous thinking.

“This issue won’t go away. The reality is that the more SDHIs you apply, the more likely you are to accelerate the resistance process,” she says.

Professor Burnett suggested growers ask whether they need a T0 spray, and if it was necessary to include an SDHI at T1.

“Remember, the only way not to select for resistance is not to apply. Use agronomic factors, such as sowing date and resistant varieties, as much as you can,” she adds.

Velcourt’s technical director Keith Norman reports that his company’s own resistance monitoring had found septoria mutations, including the troublesome H152R, at sites in Kent and the Cotswolds.

“We also did a trial in Kent, comparing the use of 1 or 2 SDHIs. It showed that the more selection pressure you put in, the greater the number of mutations you get,” he says.

He advises growers to reconsider the T1 fungicide spray.

“Don’t put so much pressure into the system. Save the SDHI for the T2 spray, where you are likely to need it most,” he adds.

Any fungicide programme must be tailored to what’s happening in the field.

“Get smarter about what you’re doing. Make quantitative assessments and know what’s going on. There’s a wealth of new technology coming along which will help with this,” he says.

Instead, he reacts to the situation in each field and according to the variety being grown.

“There was very little disease around last year, so only one-third of the farm got any sort of SDHI. Given their cost, I can’t imagine making two SDHI-based sprays,” he says.

He does use a T0 spray in most years, but that tends to be a variety-specific treatment.

“Where we’re growing Santiago, for example, we use an early spray to manage disease inoculum,” he adds.

All the experts were speaking to Farmers Weekly at the AHDB’s Agronomists Conference, which took place in Peterborough in early December.