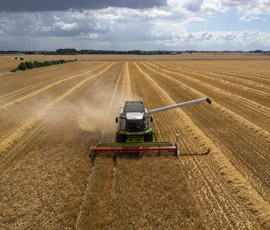 A Yorkshire farmer has narrowly missed out on achieving the winter barley world record by about 0.2t/ha, despite recording one of the highest yields in a challenging season

John Porter, who farms in Skirlaugh, near Hull, had been hoping to surpass the record of 12.2t/ha, but fell short at 11.987t/ha.

The crop of Hyvido hybrid winter barley was sown on 24 September as a third cereal using the conventional plough and cultivate method.

It received a robust four-spray fungicide programme and growth regulators as Mr Porter attempted to remove any constraints and allow the crop the reach its full potential.

However, a challenging season meant conditions were against him, with a wet winter and cold spring holding him back.

Despite not breaking the record Mr Porter, who has grown hybrid barley for more than five years, is still delighted with the crop’s performance.

“Everything looked against it. Early spring growth wasn’t rapid because of the temperature. It was only from late April onwards that it started to grow.

“To get as close as that is testament to the potential of the variety, I would suggest.”

Following the result, and having previously seen yields from the crop of 11-12t/ha, Mr Porter already has plans to plant all his winter barley area next season with Hyvido hybrid barley.