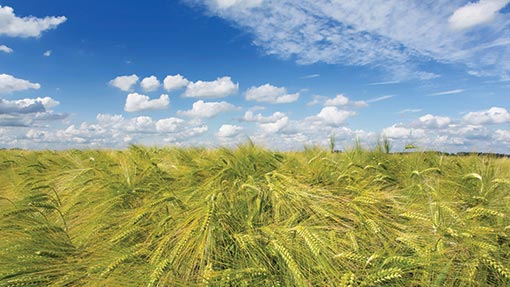 Hybrid barley can reduce blackgrass seed return by 76% compared with winter wheat, according to the latest independent Adas research.

Barley crops – and in particular hybrid barley – have been known to be more competitive with weeds than wheat, with more prostrate growth in the autumn.

This results in the plants achieving ground cover earlier, smothering any weeds germinating alongside the crop, and vigorous spring growth further suppresses any yield-robbing competition.

Despite this knowledge, there has been little or no evidence to back up the anecdotal observations that blackgrass numbers can be lower in hybrid barley crops.

That is until now, and Adas Boxworth weed scientist Sarah Cook tells Farmers Weekly that the company’s replicated trial last season threw up some significant trends.

It compared hybrid winter barley variety Volume sown at 200 and 250 seeds/sq m with JB Diego winter wheat at 300 and 375 seeds/sq m. There were also different herbicide programmes applied, including pre-emergence only and pre- and post-emergence.

“We didn’t see any visual differences between the wheat and barley at different seed rates in November, only between the two different herbicide treatments,” explains Dr Cook.

“It wasn’t until the blackgrass began to appear above the crop in June that you could see a difference between the wheat and barley and we carried out a head count at that stage.”

As an average over the plots, there were 61% fewer blackgrass heads in the Volume barley compared with the wheat. The plots with the higher seed rate saw even fewer heads.

But perhaps most interestingly, the blackgrass plants in the hybrid barley were much less competitive than those in the wheat plots.

Dr Cook and her team went back into the trial and took 10 plants from each plot and measured tiller numbers – both fertile and infertile – seed numbers/tiller, weighed the seed on each head and quantified seeds/plant.

“We found there were 43% fewer viable tillers in the hybrid barley crop and about 40% fewer seeds on the tillers. Those seeds also weighed 66% less and equated to 64% fewer seeds a plant,” says Dr Cook.

“In total, across both seed rates, there were 76% fewer seeds in the hybrid barley than the wheat plots.”

As a weed scientist, Dr Cook says one of the most important things a grower can do to get on top of blackgrass is to minimise seed return and she believes hybrid barley can play a strong role in that remit.

This will not only reduce the potential numbers of blackgrass emerging with the following crop, but also take the pressure off the pre- and post-emergence herbicides.

“It is certainly not as good as spring cropping or consecutive fallows at reducing numbers, but growing a winter hybrid barley will certainly help where growers favour a winter crop,” says Dr Cook.

“The early harvest for hybrid barley will also allow an opportunity for a stale seed-bed ahead of oilseed rape.”

Syngenta’s James Marshall-Roberts has been impressed by the results and says that growers should consider replacing their second wheat with a hybrid barley variety such as Volume.

“The information the trials has uncovered is very powerful and proves what we had seen before in the field, but had no data to back up with.

“Growers have been relying on chemicals for too long and although the chemistry still provides a level of control, we need a more integrated strategy. Hybrid barley can be a useful part of that going forwards,” he adds.

Dr Cook would like to see a comparison between the hybrids and the best two-row conventional varieties such as Glacier, but she suspects the increased hybrid vigour would provide better blackgrass competition.

“That vigour is vital and I would advocate using the highest seed rate that is agronomically acceptable to increase crop competition,” she adds.

Views from the blackgrass battle trenches

Advising in the blackgrass hotbed of north Cambridgeshire, Prime Agriculture agronomist Richard Pooley (pictured) has introduced Volume hybrid barley on to some of his client’s farms for the first time this year.

He has seen the crop make a difference in bad blackgrass areas, noting reduced head numbers and smaller heads on the remaining blackgrass plants.

“It is definitely something we can use to outcompete blackgrass and reduce seed return, which is important as the problem intensifies and herbicide product efficacy wanes,” he explains.

However, he warns that expectations need to be managed in the very worst blackgrass situations, which are typically on cold and heavy clay soils not suited to growing barley.

“If you end up with significant blackgrass competition early on, the barley won’t help as much, so getting a fine seed-bed and applying timely pre-emergence herbicides in the right conditions is essential on the heaviest land.

“Where we had a more moderate population of blackgrass, we saw the best results for blackgrass suppression,” adds Mr Pooley.

He also believes it stacks up financially, with the input costs for Volume when using a robust crop protection programme about 20-25% less than a second wheat.

“We have had yields in the region of 8-10t/ha from the barley in blackgrass situations, which is much better than a poor second wheat at 7-7.5t/ha,” adds Mr Pooley.

Lincolnshire grower Robert Chapman also tried some Volume this year, replacing 35ha of his second wheat on his lighter gravel land near Sleaford.

“We had some blackgrass that was difficult to control in the first wheat last year. Where we followed it with the hybrid barley this year, we saw virtually none in the crop,” says Mr Chapman.

The crop averaged about 10t/ha and Mr Chapman is going to increase the area this autumn to some of his heavier land where blackgrass is more of an issue.

“This year’s crop had a huge number of tillers coming into the spring and really kicked on and smothered out any grassweed. It’s also been in the barn a few weeks and has given us the chance of a good, stale seed-bed ahead of the oilseed rape,” he adds.