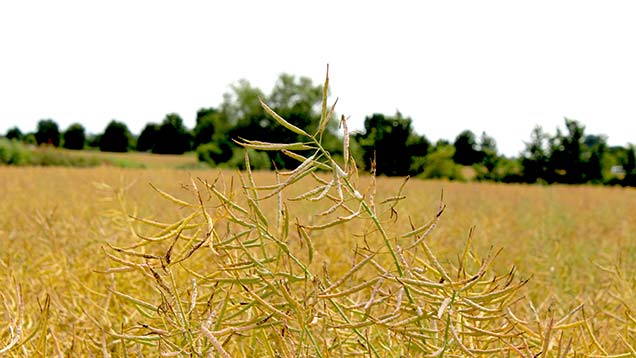 “If you don’t get out of the heaviest land by the start of September, it is too late, so I like to see my seed in the ground by mid-August.”

However, stem canker has been a real problem with his Quartz oilseed rape in the past two years, especially in the wettest fields. This is despite having the highest resistance rating on the Recommended List of 9.

The farm’s average yield is 3.7t/ha, but Mr Fussell admits it has been increasingly difficult to hit that target, as the farm became mired by phoma and slug damage in recent years.

In a bid to overcome the phoma problem, he brought his drilling dates forward by a fortnight, but he found that the conventional variety’s growth was stunted as a result, leaving it vulnerable to pest damage.

“We found that the conventional variety struggled to cope,” he says.

Damage caused by slugs, pigeons and cabbage stem flea beetle prompted Mr Fussell to search for a new variety with good early vigour. He had grown some Harper alongside the Quartz previously and saw that it coped better with early drilling.

So last August, Mr Fussell made the change growing entirely Harper, which has an 8 rating for stem canker.

“I primarily chose this variety for its early vigour to help it escape these problems.”

This ability to recover was evident last year where plant numbers went down to about 20 plants/sq m after slug and pigeon attacks. “Despite this the crop looks fantastic on the whole.”

Another change this season was moving over to liquid fertiliser and lowering the seed rate,” says Mr Fussell. Seed rates were cut from 60-80 plants/sq m down to 50 plants/sq m this year.

“We have gone over to liquid fertilser because I don’t see granular as being accurate enough, especially when it is windy. Plus the plants take liquid fertiliser up faster and it really has worked a treat this year.”

Harper’s vigour has also done well to fight off competition from blackgrass and other weeds, with mostly clear ground beneath a dense canopy.

“We have blackgrass in a proportion of the fields and that is why oilseed rape is such an important crop in the rotation because it is competitive.”

Other crops on the 356ha farm include wheat, barley and a small amount of spring beans grown to meet the three-crop rule.

He acknowledges that it is not the top-yielding variety and might not have the highest oil content at 45-46%, but insists that rapid growth is what he prizes most in his oilseed rape variety.

Looking ahead to harvest, he says: “This year we have really big pods and nice big stems, but it is not overly tall.”

Andy Fussell began cold-pressing his rapeseed oil on farm nearly a decade ago as a way of boosting his narrowing margins.

Back then market prices slumped to a lowly £120/t and the farm was losing £40/t, says Mr Fussell, who was a 2010 Farmers Weekly Diversification Farmer of the Year finalist.

With prices dangerously close to production costs again now, he says the cold-pressed rapeseed oil side of the business helps to smooth out financial fluctuations.

“It is a costly crop to grow, so we are trying to be more efficient and cut costs by reducing seed rates with our Harper variety choice. It is such a key crop for us, not only because of the cold-pressed oil business.

“Yes, the margins are tight, but that is why we have our value-added product in the oils – we have the luxury of being protected from the ups and downs when prices are so close to cost of production.”