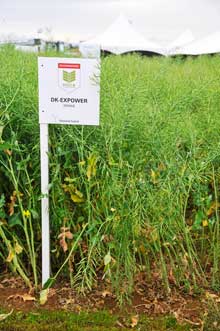 A vast range of candidate and development hybrid oilseed rape varieties were being displayed at Cereals 2012, prompting some visitors to fear for the future of conventional types.

Syngenta marked its return to the market with three new hybrid varieties, SY Fighter, SY Motive and SY Alister, all of which are up for recommendation either later this year or next.

“The Syngenta hybrid breeding programme has focused on optimising plant height and delivering high yields,” explained the company’s Nigel Padbury. “It’s the shorter hybrids that have been popular with growers.”

He described SY Fighter as the shortest hybrid on the east/west region candidate list, with a gross output of 108% and a phoma resistance rating of 8.

SY Motive, with a light leaf spot resistance rating of 6, is aimed at the north and Scotland, while club root resistant SY Alister, with a gross output of 103%, completed the company’s line up, he remarked.

Pioneer’s total of five candidates is the greatest number that the company has ever had, admitted Andy Stainthorpe. Normal height, semi dwarf and Clearfield types were being demonstrated, alongside the top yielding existing hybrid, PR46W21.

Semi dwarf PX104, a candidate for both regions, is a step change for the semi dwarfs as it has a gross output of 107%, pointed out Mr Stainthorpe.

In addition, two Clearfield varieties, neither of which is in the RL system, will be on sale this autumn now that supplies of Cleranda herbicide are available, he added. “PX100CL is a semi dwarf, while PT200CL is a normal height hybrid offering slightly better yields.”

On the Dekalb stand, latest offerings were DK Extrovert and DK Explicit, both of which are still in National List trials, together with current RL candidates DK Excellium and DKExStorm.

DK Imagine CL, the first Clearfield variety to enter the RL system, has comparable performance to ordinary rapes and is a low biomass hybrid, he noted.

DSV unveiled candidates Marathon and Troy, both of which have been tipped for success for seed trade commentators.

Marathon is the highest yielding candidate in the east and west region RL trials, with a gross output of 110%, while Troy is DSV’s first semi dwarf. Bred by LSPB, Troy’s performance to date puts it above all the other semi dwarfs and on a par with normal height rapes.