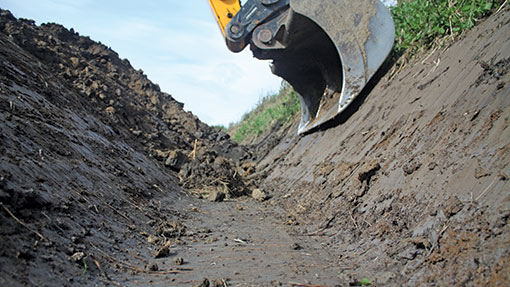 Ditch systems and land drainage are being pushed to their limits on many UK arable farms resulting in a small increase in new drainage work, according to specialists William Morfoot.

Managing director Tim Sisson says heavy winter rainfall, together with ageing drainage systems installed more than 30 years ago, has resulted in a 25% rise in water management projects undertaken by the group this year.

“Many of the drainage systems from the 1960s and 1970s are underperforming or are dormant. As a result, growers have to deal with a selection of problems – from getting machinery stuck to dealing with standing water and disappointing yields,” he says.

See also: Read all the latest news from Cereals

Signs that ditch maintenance/drainage could be required

Large pools of in-field standing water are an obvious sign and the recent weather has exposed some issues, comments Mr Sisson.

“But drainage problems should have been identified before things get to this stage. A study of your yield data is a good place to start,” he adds.

A drainage contractor will look at historic drainage plans, undertake a full survey and come up with a proposal plan to remedy any issues, on a site-by-site basis.

“No field or site is the same, which is why costs and complexities can vary. The average cost of a drainage scheme is in the region of £1,700-2,480/ha,” he says.

Water has to be able to flow, he continues. “That’s why permeable fill needs to be used on top of the pipes on most soil types, and it should be placed within 16in of the soil surface, so that there’s a porous layer for the water to flow through,” Mr Sisson adds.

Drainage work can be completed in standing crops, or between crops, and he says his group usually manages to do about 4ha/day. 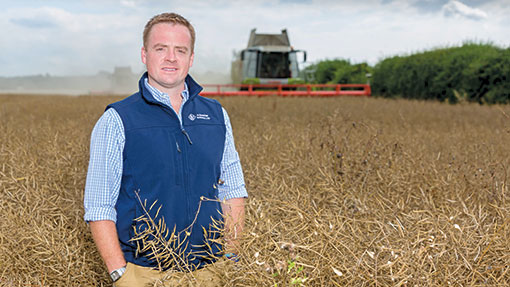 Drainage improvements are a continual process at Albanwise Farming in Norfolk, following rapid growth and the integration of new land into the arable operation.

“Yield increases are just one result. There’s also a timeliness benefit, as we can travel on the land when we need to, and a soil health effect. All of these things combine to help give the right conditions for optimum crop growth,” he says.

Mr Dye oversees two farms in Norfolk – one at Saxlingham, near Holt, and the other at Barton Bendish. Covering a total of 3,800ha, cropping includes winter and spring cereals, oilseed rape, vining peas and sugar beet, across a range of soil types.

Owned and contracted land has been added to the business in the past five years, he explains.

“As we take it on, we learn about it. There may be damp patches in certain fields, but other parts will be continually wet and simply too difficult to farm,” he says.

He has part and whole fields drained by William Morfoot, installing drainage schemes and having ditches reprofiled. “It’s really important to keep any water moving and prevent silt building up in the ditches,” Mr Dye adds.

One field at Saxlingham proved to be too wet to travel on in the spring.

“We had half of it drained, which took two days to complete, and the wheat yields went up from 8t/ha to 11t/ha. That sort of difference makes it easy to justify the cost,” he says.

The expertise of the drainage contractor is important, he stresses. “They assess the site and come up with a recommended course of action. The intensity of the scheme determines how much it costs and how long it will take to get done.”

Much of his existing drainage infrastructure is based on old clay pipes, which have a shorter lifespan than today’s plastic pipes, he adds. “New schemes use plastic pipes which are backfilled with gravel, creating a porous sponge for the surrounding area.”

Mr Dye believes that drainage improvements are allowing the business to make the most of its land asset. “At its best, its bringing fields back into production,” he says.