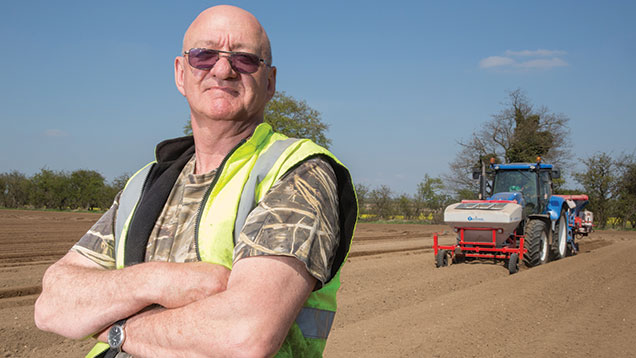 Like pouring water on to an expanding sponge, significant investment in its irrigation network has seen impressive growth for OW Wortley & Sons’ Nofolk-based potato enterprise.

At peak flow the farming company’s many miles of pipes and 40 irrigators can pump out 1m gallons every three hours and has resulted in the farm now producing 5% of the UK’s Maris Peer salad potatoes.

Managing director Andy Wortley first visited the home farm at Methwold on the edge of the Norfolk Fens and Breckland with his mother Rose as a one-year-old.

He explains that after a quick look through the locked gates, his mother pushed him back to their village home and encouraged his father Owen to buy the yard, along with 4ha of surrounding land.

But it was not until his elder brother David bought a 40ha block of Breckland nearby and sunk a borehole that the business really took off.

Today, its seven reservoirs store about 150m gallons of winter water, fed by a mixture of surface and ground water, and the expansion of the irrigation network has also extended to rented land through the negotiation of easements.

This has allowed the business to supplement its own land to keep potatoes as wide as possible in the rotation – key for pest and disease management.

“We wouldn’t have been able to build up the business without the millions of pounds of investment in irrigation – we will only take on land if we can irrigate,” says Mr Wortley.

The farm’s area has grown to about 1,400ha and produces a range of crops, but it is the 400ha of potatoes that is the main focus for the family business.

Mr Wortley explains that in the 1970s and 1980s, packer varieties such as King Edward, Cara and Estima dominated, but that changed in the 1990s when the supermarkets began to dictate demand and there was a shift to versatile salad potato varieties such as Maris Peer.

The variety now represents 80% of their spud area, with the remainder consisting of white baker Harmony and two red-skinned types, Desiree and Rooster, for prepack.

A recent trend has seen supermarkets wanting to differentiate by selling their own-brand, niche salad variety, and Mr Wortley has tried some of these, but without success. He says they have been difficult to grow and in many cases, one particular agronomic problem has resulted in their downfall.

“We are always looking for that next step, but these varieties have been expensive for breeders and the growers, with higher seed costs and no returns, so we are still with Peer as our mainstay,” he adds.

The industry has struggled in recent times amid falling demand for fresh potatoes and over-supply putting pressure on prices, and experts are predicting plantings may drop 5-10% for 2015.

Mr Wortley believes the industry is entering a difficult period and there will be a further culling of smaller growers – a process that has been happening for a number of years – but further cuts are needed to balance demand with supply. “If I could pass a law that limited potatoes to a one-in-12-year rotation, I would,” he says.

“It would solve a lot of our problems by reducing volume, along with helping with pest and disease pressures such as potato cyst nematode, reducing the reliance on some of the nasty chemicals that we use,” explains Mr Wortley.

Despite the difficult times, he believes long-term prospects are good and the business will put increasing emphasis on costs of production.

“Cutting costs cannot be at the expense of ouput, but we will look to eliminate waste as there just is not the market for oversize spuds anymore.

“In the past the ratio has been 60:40 salads to oversize, but it is now closer to 80:20 and we will try to close that gap as much as possible to maximise returns and dilute costs,” he says.

Rise to challenge of salad spuds

The land around Methwold lends itself perfectly to salad potato production, being light and free-draining and with plenty of irrigation sources.

Mr Wortley says it is a very technically challenging and expensive crop to grow and he enjoys the challenge, but when things go wrong, it can be very costly.

“It’s simple really, you just need to get everything right – the trouble is there are 1,000 things that can go wrong.

“Everything is geared towards increasing tubers/sq m and we have learnt a lot over the past 20 years, but there is still more we don’t know than we do,” he explains.

There are three crucial aspects to maximising yield that meets the market requirements and gets top price – tuber size, tuber number and skin finish.

Alongside a tight-knit team that includes independent agronomist Martyn Cox, nutrition expert Mark Laws, his three sons and two nephews, Mr Wortley employs a meticulous approach to ensure as many tubers as possible make the 42mm size grade with a bright skin finish.

Mr Wortley emphasises the importance of seed selection, with a small proportion home saved, but the majority sourced from established contacts in north Norfolk, Yorkshire and Scotland.

“Martyn inspects seed crops when they are in the ground to check for disease and virus.

“You need to get things right from the start and we have had trouble with poor-quality seed over the years, but we have reduced crop failure rate by being thorough with seed selection,” says Mr Wortley.

Once delivered on to the farm in the previous autumn, the seed is stored at the perfect temperature to manipulate the optimum shoot number per seed tuber – about five for 40mm Maris Peer seed.

Higher shoot numbers results in more stems, which has a direct relationship with increased tuber numbers – the name of the game for salad spud growers.

Destoning/declodding is critical when producing smaller tubers, so it is a slow and expensive job with narrower webs on the machines.

At planting, seed spacing is about 15cm in triple-row beds to restrict the size of tubers during bulking, and evenness is key, with gaps allowing the development of oversize spuds.

Once in the ground, Mr Cox provides accurate predictions on when each crop will emerge and reach tuber initiation – the point when stolon tips begin to swell to form the final tubers.

“It is important to know for management purposes as the potato area is spread across a number of farms, soil types and, in some cases, a third party doing the irrigation.

“It gives everyone a bit of warning for pre-emergence herbicide sprays and perhaps more importantly irrigation timing, which is critical for salad crops,” explains Mr Cox.

Common scab can be encouraged by allowing ridges to dry out, so with skin finish important for saleable yield, any mistakes on irrigation scheduling can be extremely costly.

“In some years we start irrigating at emergence and aim to put on 1in/acre each week and might put 6-8in/acre through the season. It can be much less than that, but we have enough water for the crop if it doesn’t rain,” says Mr Wortley.

The crop grows for 90-120 days after emergence and burning off the crop at the correct time is a must to prevent the tubers from growing above 42mm.

Mr Wortley takes the responsibility of that decision himself and will conduct 200 or more 2m sq test-digs at the back end of the season to ensure the optimum tuber number and size is reached.

“We have to allow a bit longer for burn-off now we have lost Harvest [glufosinate-ammonium] and rely on Reglone [diquat]. Sometimes there is a bit of panic and I’m straight on the phone to the spray operator,” says Mr Wortley.

He is not willing to reveal the secrets behind crop nutrition, but it has had a profound effect on tuber development and numbers.

Since 1995, yields have increased from 20t/ha to about 38t/ha, which has in part been an increase in the size specification from <35mm to 42mm, but also improved management.

“There has been a lot of hard work involved and we have learned that the best looking crops are not always the best yielding.

“We are now leaning towards a one-in-10 rotation, so that should help improve things further,” adds Mr Wortley.