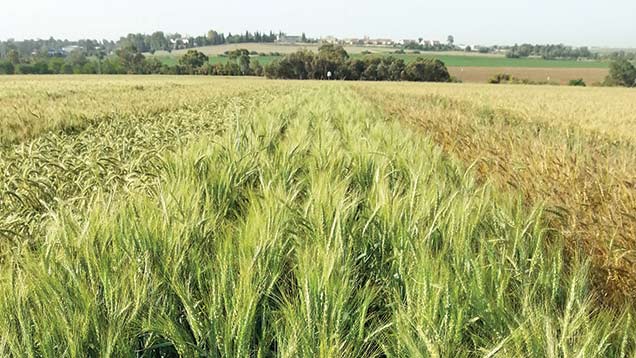 Spring wheat varieties with better stress resistance and unusual physiological characteristics are being assessed by Velcourt, as the crop gains greater importance in the farming group’s rotations.

The company’s technical director Keith Norman explains that the varieties on test come from Israel, where breeding programmes have concentrated on introducing genes from wild relatives –similar to Niab’s superwheat programme – in order to introduce genetic diversity and improve abiotic and biotic stress resistance.

See also: Pick up a premium with spring wheat

“Better tolerance of drought conditions, improved nutrient uptake and useful disease resistance are just some of the things that we can hope to see from these varieties, as well as a yield increase,” he says.

It is very early days and there is a lot to learn. “At this stage, their grain quality is unknown, as is their suitability for UK conditions. Septoria isn’t a big disease in Israel, for example, and their frost tolerance is unlikely to be special,” he adds.

Also included on the Velcourt stand this year are updates on three industry projects from the Biotechnology and Biological Sciences Research Council Crop Improvement Research Club.

Turnip Yellows Virus resistance in two oilseed rape varieties; the water uptake of different wheat varieties; and root architecture in wheat will all be featured, giving visitors an insight into any early differences observed.

“We will also have a display of how CT scanning is being used to measure water uptake efficiency and how measurement techniques are helping to identify that wheat varieties behave differently,” he says.

Two new products from Verdesian will have their debut as they go into Velcourt trials. The first is a nitrogen uptake enhancer, which is sprayed on to plants to make them more efficient. The second is a new substance that enhances fungicide uptake and efficiency.

The Velcourt approach to blackgrass and disease control, in both wheat and oilseed rape, will be displayed, alongside new oilseed rape varieties from Bayer. In addition, an oilseed rape establishment demonstration will show the effects of drilling date on flea beetle damage.

They are of interest to Mr Norman because spring wheat is being grown more widely in the farming company’s rotations, due to its role in helping to control blackgrass.

As a result, a total of 11 different varieties are being put through their paces on one of Velcourt’s commercial farms, and compared with the best UK spring wheats.

“We’re looking to see if the Israeli wheats are a step up, or have characteristics that make them perform very well. In a hot, dry spring, we would expect them to have something more to offer,” he says.

Four of these varieties will be in plots at this year’s Cereals event, on the Velcourt stand. “They’re not registered in the UK or commercially available yet. But we believe they could be of interest,” Mr Norman adds.

Some unusual physiological aspects of the wheats include a variety with a drooped ear that points down to the ground.

“This variety has been developed to that the ear can shed water, so minimising the chances of fusarium infection. Israeli crops receive a lot of irrigation during the latter stages of crop development, so the risk of fusarium increases,” he adds.

A seed treatment based on mycorrhizal fungi is also being assessed in Velcourt’s field trials and will also be at Cereals. Another development from Israel, it is hoped that the inoculant will help plants reach and mobilise soil nutrients.

Mycorrhizae, described as “good” fungi that form symbiotic relationships with plants by the company responsible for their development, help to extend plant roots and increase the root surface area.

The claim is that this has an effect on their ability to retrieve both nutrients and water from the soil, as well as to repel soil-borne pathogens.

“The use of these products is nutrition-led. The fungi act as a conduit to nutrients, especially phosphate,” Mr Norman adds.

Again, Velcourt is conducting trials on commercial crops, this time with both wheat and onions. The company has treated 10 UK wheat varieties with the inoculants and will be looking at any effects on yield, while two sites are being used to investigate the use of the product on onion sets and seeded crops.

“This is a very new development, which may have yield and quality benefits and could lead to some reductions in fertiliser applications,” says Mr Norman.