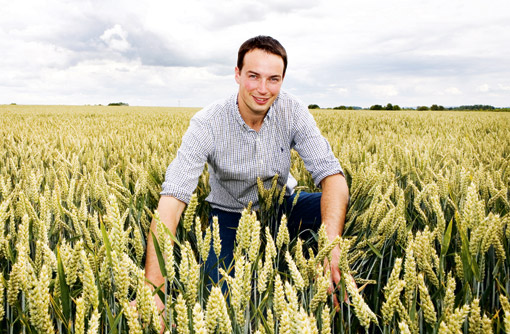 In 2011, he grew Solstice milling wheat under contract with Openfield for Warburtons, Cordiale, a small quantity of Group 3 wheat for Weetabix and trialled some Crusoe for Limagrain.

Across the wheat area, he achieved an average yield of 7.3t/ha, with Crusoe being the best yielding variety. The crop grown for seed yielded more than 100t off the 11ha area.

“We were pleased with the yields in what was a challenging year and the proteins were good at 13-14%.”

His approach to nitrogen has allowed him to reduce nitrogen inputs without affecting yield or protein level.

Late foliar nitrogen applications are not permitted under his contract with Warburtons, so he applies the last dose as late as he can. “We put on a total of 240kg/ha on the Solstice, plus 200kg/ha on Cordiale, and the last application was put on at the end of June.”

Another part of his nutrient strategy is incorporating a large quality of organic manure every year to improve natural fertility and water retention.

Coffee waste, green waste compost, farmyard manure and bio solids are all used in rotation to maximise efficiency while avoiding any conflicts with milling contracts. “For example, I don’t use biosolids before milling wheat, but I do before spring barley.”

The nutrient content of these manures is analysed each year and application rates are varied accordingly.

The only straw that leaves the farm is traded with a neighbour in return for muck, so there is minimal organic material being removed from the farm.

Much of his equipment is guided via GPS auto steer to maximise the efficiency of field work and inputs, and the whole farm has been mapped into soil zones. “We’re saving about 25% on our fuel costs since using GPS with our Discordon.”

John Deere Green Star on the SF1 signal is used for all operations and the accuracy level is more than adequate in his area, he says.

Images from Google Maps, results from previous mapping carried out by Soyl and field tests have allowed him to build up an accurate picture of soil variation across the holding. Mr Price is also working with Clive Blacker, from Precision Decisions, to build up his own variable application map, which will be managed through his Gatekeeper farm management software.

Nabim trade policy manager Martin Savage says James stood out for his enthusiasm and approach to the crop. “We saw that he considers everything that he does to the crop, from selection of varieties to building close relationships with his customers and especially the end-users,” he says.

Much of the farm is on shallow Cotswold-type soils, which are quite limiting. James has approached this “constraint” by using precision technologies to examine inputs and to tailor requirements to his wheat crops.

Fellow judge and award-winning grower Mark Ireland adds: “I was impressed with the relationship he has forged with Warburtons through the Farmers Forum and his willingness to work with them to look at new varieties together with nitrogen trials.

“His care for the crop didn’t finish at harvest as he has invested in updated storage facilities, which, together with rigorous sampling procedures, has resulted in him being able to supply grain of the highest quality to his customers,” he says.

The brothers also grow smaller areas of more specialist varieties, which last year included 45ha of AC Barrie, grown for Rank Hovis, and 70ha of bearded wheat Pireneo, grown under contract for Harlow Agricultural Merchants. Pireneo is a winter variety and is being grown for milling into specialist flours for the food industry.

Growing top-quality bread-making wheats on the Northumberland Coastal Plain is a tricky business, so Pip Robson opts for higher-yielding biscuit varieties on the ground he farms at Chathill.

The climate in this part of the country is good for wheat growing, but the window for harvesting is too short and risky for Group 1 and Group 2 growing. Last season, his wheat area was split between 70ha Viscount, 31ha Zebedee, 11ha Invicta and 16ha of Group 1 Gallant.