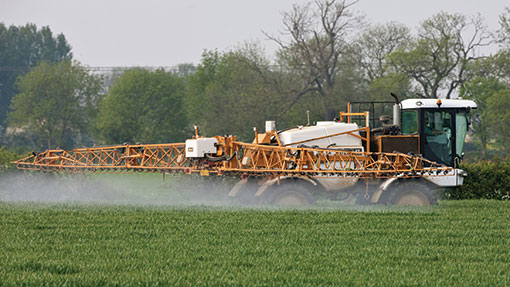 The combination of product shortages and increased demand for fungicides means that growers may have to change their plans for the T3 spray this season.

That’s because up until now prothioconazole has been the easy choice for the ear spray, says Bill Clark, commercial technical director of NIAB TAG, who points out that this spray timing is not just about ear disease.

“The T3 has always had a role in topping up the foliar disease control provided by the previous sprays, as well as giving fusarium and brown rust control.”

Prothioconazole was an obvious choice at this timing, being the best on fusarium, but having activity on septoria and rust too, he notes.

“So by using prothioconazole, growers had every potential disease problem covered, whatever the weather.”

Production shortfalls of prothioconazole – affecting the straight product and co-formulations – mean that many growers are going to have to look at alternative choices for the 2014 T3 treatment, he believes. “Where they can’t get hold of prothioconazole, it’s going to be a choice from the second tier of products.”

Before making that decision, it’s important to appreciate that while fusarium is important, there’s also likely to be a need to control septoria and yellow rust this year, after such high disease pressure, he maintains.

“Topping up the foliar disease control offered by the flag leaf treatment will be especially important. Yellow rust has been very bad this season, as has septoria, while fusarium will become an issue if it’s wet in June.”

Growers can switch to metconazole, or a co-formulated product such as Brutus, containing metconazole and tebuconazole, advises Mr Clark. “These will help with fusarium, as well as having activity on rust and septoria.”

Another option is tebuconazole on its own, he acknowledges. “But my worry with this choice is that it won’t give you the septoria control that some crops will need. However, it is good on fusarium and rust.”

Where flag leaf sprays are still to be applied, Mr Clark suggests keeping back any planned prothioconazole for later. “If it’s due to be in the T2 treatment, substitute it for another triazole and use what prothioconazole you have got at T3. There are more choices for the T2 spray.”

He also points out that both product choice and rate are important, especially where fusarium is concerned. “It’ not a simple as just using higher doses of older chemistry. They won’t give the same control, which in turn, could have an effect on mycotoxin levels.”

Richard Beaumont, an agronomist with Zantra in Kent, says that his choice for T3 will be an epoxiconazole/tebuconazole mix, with different ratios of the two products being used according to need and decided nearer the time.

“I always try to alternate the use of prothioconazole and epoxiconazole throughout the programme, so that there isn’t too much reliance on one active ingredient.”

He adds that there’s always the opportunity to add in a strobilurin for extra rust control, if it’s required. “If the other sprays have gone on in good time, there shouldn’t be any need for septoria control at this later timing. Hopefully it will already have been dealt with.”

He notes that another consideration is that the T3 spray could be pulled forward this year. “Crops are ahead and spray intervals must be kept tight, to three weeks where possible. If the T3 is earlier than normal, then we will have to think about the need for a T4 in some crops.”

Where that’s a possibility, the T4 treatment could be based on tebuconazole, with or without a strobilurin, he suggests.

His colleague, Zantra’s technical director Chris Bean, reminds growers that one of the advantages of prothioconazole at T3 is the timing leeway it provides.

“With prothioconazole, you need to get it on within five to seven days of infection at flowering,” he says.

But where growers are being forced to switch to tebuconazole or metconazole, that window tightens, he warns. “You will only have three days to apply it. And you will need to use a higher rate for the same end results.”

The other option is to use a product such as Brutus for the T3 spray, he advises. “There are alternatives, so there’s no need to compromise fungicide programmes.”