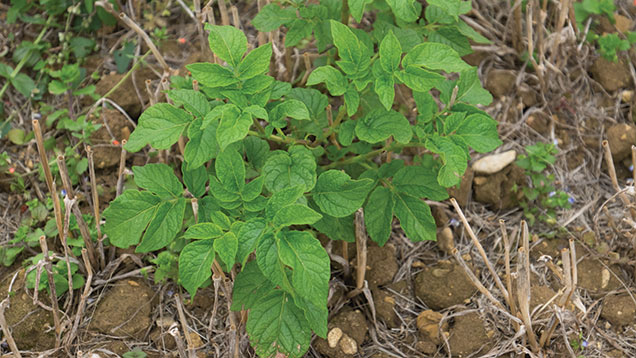 Widespread and vigorous growth of potato volunteers in stubbles is providing an ideal opportunity to spray them off and reduce rotational pest and disease pressure.

Unsettled weather through August and into September has given soil moisture and perfect growing conditions for volunteers in standing cereals and stubbles.

Left unchecked, the plants help an array of diseases, such as late blight, black dot, spraing and potato virus, to proliferate on potato growing land.

Volunteers can also help potato cyst nematode (PCN) populations thrive and destroying this “green bridge” is a key part of reducing overall pest and disease incidence through the rotation.

Norfolk-based Prime Agriculture agronomist Colin Smith tells Farmers Weekly he has been surprised at the extent of volunteer growth in his area this autumn.

“It’s an ongoing problem and rotationally it’s bad news. It keeps pests and disease ticking over and you can also get some variety carryover [to contaminate future crops],” he explains.

While the conditions have encouraged a plethora of volunteers, they are also providing the perfect opportunity to hit them with broad-spectrum herbicide, glyphosate.

Mr Smith advises that growers spray them off as soon as is appropriate, while there is active growth, soils are moist and temperatures warm.

However, independent potato consultant Simon Alexander cautions that going too early might result in poor results, as the plant is still putting its efforts into producing canopy.

“You need to target the developing tubers and spraying when the canopy is still growing could result in the chemical not getting down into those tubers,” he explains.

Subsequently, he suggests holding off until plants are flowering and warns growers to keep an eye on blight outbreaks or forecast frosts, both of which can defoliate the crop and inhibit uptake of glyphosate sprays.

“You need to target the developing tubers and spraying when the canopy is still growing could result in the chemical not getting down into those tubers”
Simon Alexander, independent potato consultant

Rueben Morris, potato expert at distributor Frontier, says the key to a good kill is using a high rate of glyphosate to ensure enough active reaches the tubers.

“Tops are irrelevant at this time of year and rates used in stubbles for annual grasses and broadleaved weeds aren’t enough to kill the tubers,” he explains.

Dr Morris recommends using a glyphosate product such as Roundup Energy, which has a high active loading of 450g/litre, aiming to use at least 3 litres/ha, but ideally 4 litres/ha to deliver 1,800g.

Mr Smith says while conditions remain favourable for glyphosate use, an older 360g/litre formulation at 4 litres/ha could suffice.

Adding an adjuvant such as X-Change or ammonium sulphate when using hard water will help maximise efficacy, as the dissolved minerals can inhibit the effectiveness of the glyphosate.

“There is also Kyleo, which is a glyphosate/2,4-D formulation. It adds some useful control of difficult weeds such as nettles and oilseed rape volunteers, as well as helping with the potatoes,” he adds.