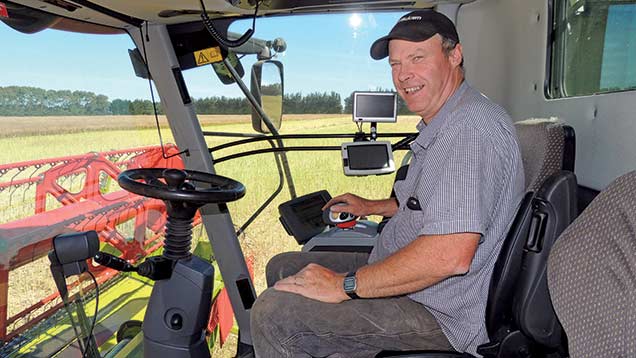 Chris Dennison in his tractor cab

Virgin land, the ideal climate and good weed control are the key components of a New Zealand grower’s record-breaking crop of oilseed rape.

Chris Dennison harvested a moisture-corrected 64.37t off 10.2ha on 23 January, a yield of 6.31t/ha. This beats the 6.14t/ha record set by Tim Lamyman, of Worlaby Farms, Lincolnshire, last July.

Mr Dennison, a former world record wheat yield holder from near Oamaru, on the east coast of New Zealand’s South Island, says reading about Mr Lamyman’s feat in Farmers Weekly spurred him to “have a crack” at the OSR record.

Just over two-thirds of the area was hybrid Flash, with the balance being high-oleic acid (HOLL) Vistive.

Both were sown on 3 April at 2.7kg/ha with a KRM triple-disc drill in 30cm rows. The crop followed barley with straw removed and cultivations including a five-pass tine and roll cultivation sequence.

“That sounds like a lot of passes, but it didn’t take many hours because they are all 6m tools,” points out Mr Dennison, who has moved away from min-till as his silt-loam soil over gravel became too tight.

A foliar dressing of boron and molybdenum went on with the 11 September fungicide (see Weed and disease control box).

“I see that deficiency in pretty much every field of brassica I go into, but I only saw it once or twice in the UK in more than 20 years.”

An exceptionally dry spring and summer saw the crop irrigated three times from October to December, with 35mm applied at each pass. The crop grew to near 2m, so a 6 January application of glyphosate was helicoptered on.

Both the Flash and Vistive were nearly 2m tall, with Vistive shading it on the yield meter.

“Even with our high clearance rig on the sprayer we’d still push down quite a bit of crop and lose some yield. Really it was taller than I would have liked it.”

He believes the sunny season and his farm’s coastal location, which keeps temperatures moderate when crops inland suffer heat stress, are key to the yields he achieves.

Mr Lasham adds that even higher yields may soon be seen. “We’ve already had a 7.2t/ha crop in the North Island that wasn’t recorded and combine yield meters are telling us we’re doing 9t/ha in places.”

Another important factor is the virgin ground, since oilseed rape only returned to New Zealand’s rotations in 2007 after the 1980s closure of the only previous crusher.

Mr Dennison’s paddock had been in an arable rotation for at least 20 years, but other than an occasional catch-crop of forage rape for winter grazing, it hadn’t seen a brassica.

Pam Chambers, UPL technical support manager for the UK and Ireland, was in New Zealand in early January and saw the record crop.

“The stems just prior to harvest showed very little sign of disease,” she told Farmers Weekly.

She agrees the virgin OSR land used was probably a crucial factor and New Zealand’s wider and more diverse rotations and climate mean yields there will prove hard to beat.

“It is well documented that NZ has more solar energy throughout the year than the UK. Mr Dennison is also ideally situated near the coast and has access to irrigation.

“Radiation use efficiency at flowering is likely to be much better than in the UK, leading to increased seeds/sq m.”

She believes there is more to come. “Who knows what yield will be possible… the [crop] that achieved the record was very tall and quite thick. A more open and shorter canopy could lead to even higher yields.”